Hands down, no question, without a doubt the most ridiculous bike ride I have ever done in a single day, full stop. Two months off the bike, then one hundred miles, twenty one thousand feet climbed, and nearly fourteen hours of saddle time. Most people think we mountain bikers are nuts; sometimes I do too.

Henry Coe State Park is one of the most vast in the California State Parks system, second only to the Anza-Borrego Desert, which I don't really count, since so few people actually go there. Coe is 89,000 acres of California's past: oak forests, sparsely shaded pine ridge lines, ephemeral stream beds, and old ranch roads. That's 139 square miles, but even that is hard to fathom. I usually describe it to people like this--you know how in your local park, you climb to the top of the ridge, look ahead, and look behind you, and you can see the whole park? In Coe, when you get to the top of a ridge, you see another ridge, and another, and another, and a normal "solid ride" is five hours, thirty five miles, seven thousand feet vert, and gets you through maybe a quarter of the place.

I've wanted to ride the "Hard Coe're 100" route since it emerged in 2011 as a group ride coinciding with the annual Tarantula Festival fundraiser at the park HQ, but I've always been out of town or totally burnt out by the first weekend of October. The idea of actually seeing the WHOLE park in one day always had its appeal, in spite of the "Coe Factor". The Coe Factor refers to an imaginary multiplier for mileage at Coe; due to the steep firebreak routes and rough, overgrown, seldom-used trails, the time and effort to go a mile at Coe needs a multiplier in the range of 1.5. Fortunately, in Fall 2016 I'm taking a grad school class at UCSC and hanging out at the parents' house in Cupertino, making the ride close by. And I crashed hard at the Downieville Classic, hurt my shoulder, got married, went to Iceland for three weeks, then taught a hydrology class near Truckee, forcing me to take seven weeks away from bikes of all kinds, so I was anything but burnt out on mountain biking.

I knew I needed a smaller chainring than normal, so I stole the 30t off my wife's bike and put it on my Air9 hardtail, the only bike in my garage with the correct crankset to accept the tiny ring. I went with the wheels I used for Downieville, with a 2.3 Minion SS in the rear and 2.4 Ardent up front. Super beefy for the terrain, perhaps, but I didn't want to risk washing out a corner and re-injuring my shoulder. I then stayed up way too late gathering foodstuffs and gear, and trying and finally succeeding in loading the route onto my Edge 500. It would only take it as a .tcx file, not the .gpx provided, so I had to load the .gpx into ridewithgps.com and then export the track as a .tcx to get it to work. After all that excitement, I got a quick four hours of sleep before a 5am alarm, and showed up just in time to wave goodbye to the day's riders as they headed out on time from the Hunting Hollow entrance, fifteen minutes before I would get rolling. This ended up working out great, since I followed their tracks and caught the head of the bunch before the China Hole climb to the Park HQ entrance. It also enabled me to ride in a normal kit, no warmers or jacket. I was counting on starting and finishing hard to stay warm. 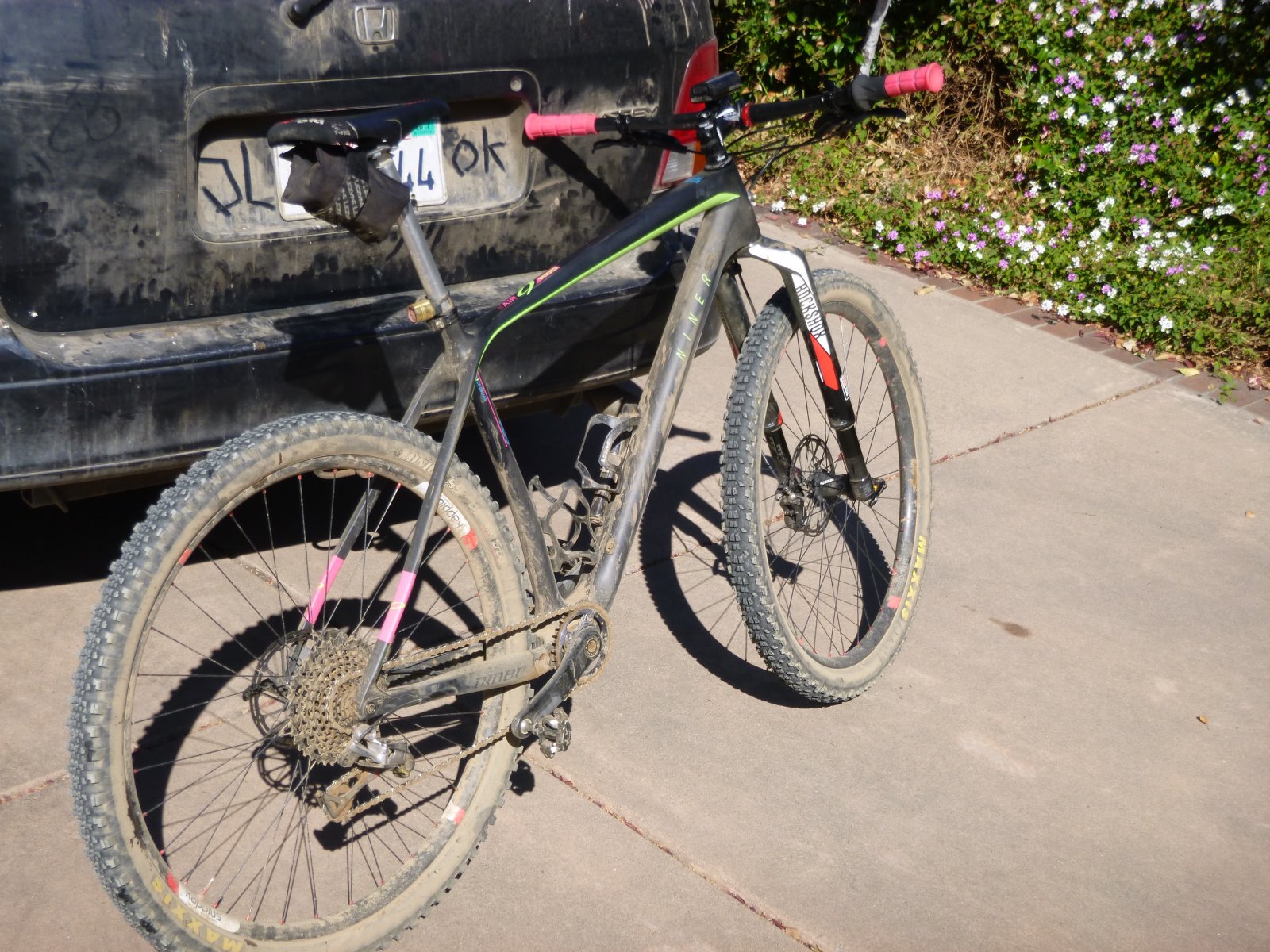 In an amazing coincidence, my dad (JL) rolled in to HQ just two minutes ahead of me, after sleeping in and riding a direct route from Hunting Hollow. I enjoyed a sweet potato burrito I had prepped the night before and chatted with JL for a bit, during which time several of the former lead bunch arrived, filled bottles, and left. I didn't even see two of them-- Bob and Stephan. When I caught them at the end of Flat Frog Trail after lunch, I jokingly said "You guys are on a mission!", and Stephan replied in standard matter-of-fact accented English "Yes, the mission is to break the record". It turns out Brian Lucido completed the route in about 14.5 hours back in 2014. I got to HQ in 4.5 hours though, which was a third of the mileage, so I wasn't too worried about being out that long. 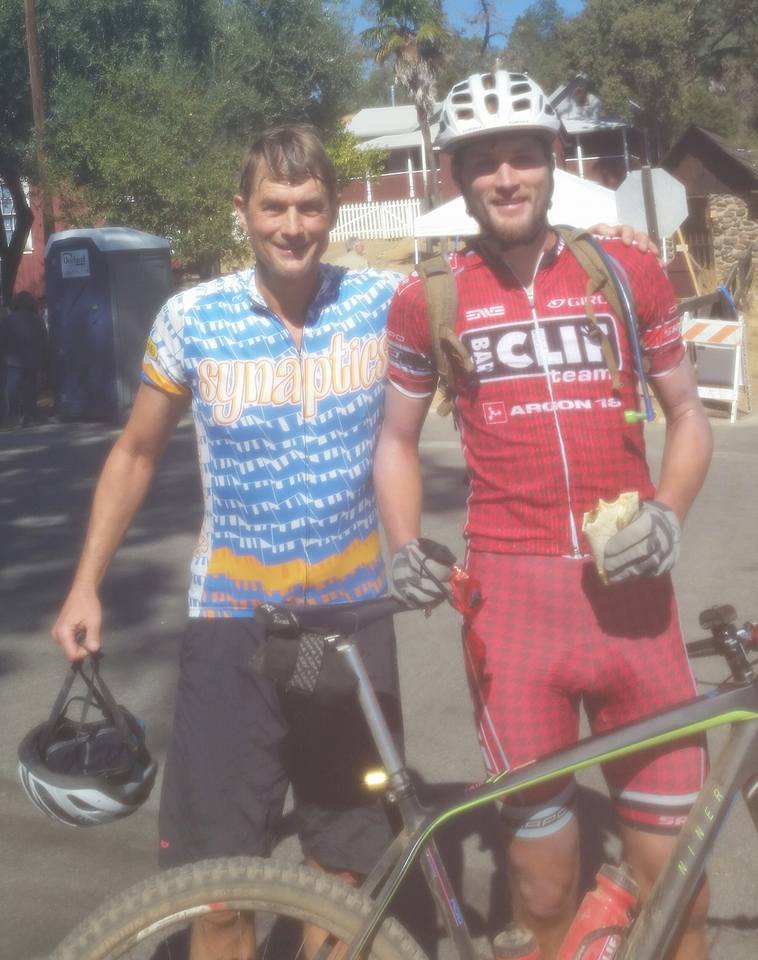 After descending Middle Ridge, which I think is the best long descent in Coe, I was into more unknown territory. Past the Poverty Flat road climb, which I barely cleaned thanks to the chalky dust an inch deep covering it, Bear Mountain loomed. I had to stop at intersection and consult my annotated map a few times, since my Garmin was getting lost in the Narrows and telling me I was off route. Bear Mountain marked the start of questioning the wisdom of doing this ride. My shoulder hurt a bit for the first two hours but then warmed up and was feeling fine by HQ, but by Bear Mountain my back and legs were becoming unhappy with the duration of saddle time. The 30t was also too big with 1x11; a 26t would have been appreciated for the insane 30%+ pitches, or the new SRAM Eagle with 50t cog, but I suffered upward alone, pedaling when I could and walking when it got too steep to pedal seated.

I descended solo to Mississippi Lake, but got lost a few more times, and then cursed my choice of hardtail over full sus on the bumpy Heritage Trail to Pacheco Camp. The four miles of creekside backcountry trail was anything but enjoyable, and Bob and Stephan caught me at the water stop. I was carrying a 100oz camelbak and two bottles, so I didn't need the water, but I washed my face and made the decision to ride with Bob for a while, since he knew the route by heart. This turned out to be a great decision, since I was pretty deep in the hurtbox at that point. Having some company to chat with and show me the way got me through the next twenty miles, including the horrid Kaiser-Aetna road climb to the far side of the park, where I refilled water for the second and final time at the Dowdy Ranch entrance. Stephan caught up, but only as we were leaving, so we trudged on up some ridiculous fireline dirt roads, mostly walking the uphills. I had completed the first 50 miles in seven hours, which included much more than half the climbing, so I thought I could do the second fifty in six, but all that walking drastically reduced my average speed and caused some doubts to creep in about even finishing in 14.5 hours.

Just as the sun was setting, I got back onto Coit Road, in familiar territory, slurped maybe three gels and two Shotblok packages in less than an hour, and got a huge second wind. I wished Bob a pleasant ride, and put my head down up Coit and Wasno roads, finally bowing to the darkness at the turn to the Dexter Trail descent. Noting that I made to 11 miles to go before blasting my Lezyne Decadrive, I was able to run it at near-full power, and actually enjoy the fun Grizzly Gulch single track in the last hour of the ride. Somehow, the darkness made me forget how much I had suffered in the preceding twelve hours, and I crushed the last ten miles in a little over an hour.

I ate a few sausages from the German BBQ in parking lot and chatted with Stephan and Bob after they rolled in before getting really really cold and heading home. JL had left me a note in the dust on the back of my minivan letting me know he was safe, which is still visible in the picture with my bike. My back was toast from hardtailing it for so long, so toast that I couldn't really bend over. And my backside also wasn't used to sitting for that long, so I had a pretty solid diaper rash that took a few days to heal. And man, I was sore for more than a few days after, much more than I was expecting. It seems training for big rides does make a difference after all. I wish I had some pictures of the scenery from the day, but even though I carried my camera in my back pocket, I never took it out. Oh well.

I cleaned out my Camelbak the next day to take account of my consumption: six packages of Shotbloks, four gels, a Clif Bar, two Builder bars, and two homemade burritos. Plus a few multivitamin fizzies I acquired in Iceland, and a single serving of Nutella. After thirteen and a half hours, 100 miles, and 21k vertical feet, I had one vanilla gel left. Good thing I finished strong instead of bonking and needing more food. I'm not sure where the condom wrapper came from--I don't recall needing one during the ride, but my recollection is fuzzy from all the pain, and it was there in the Camelbak at the end so it made it into the photo. 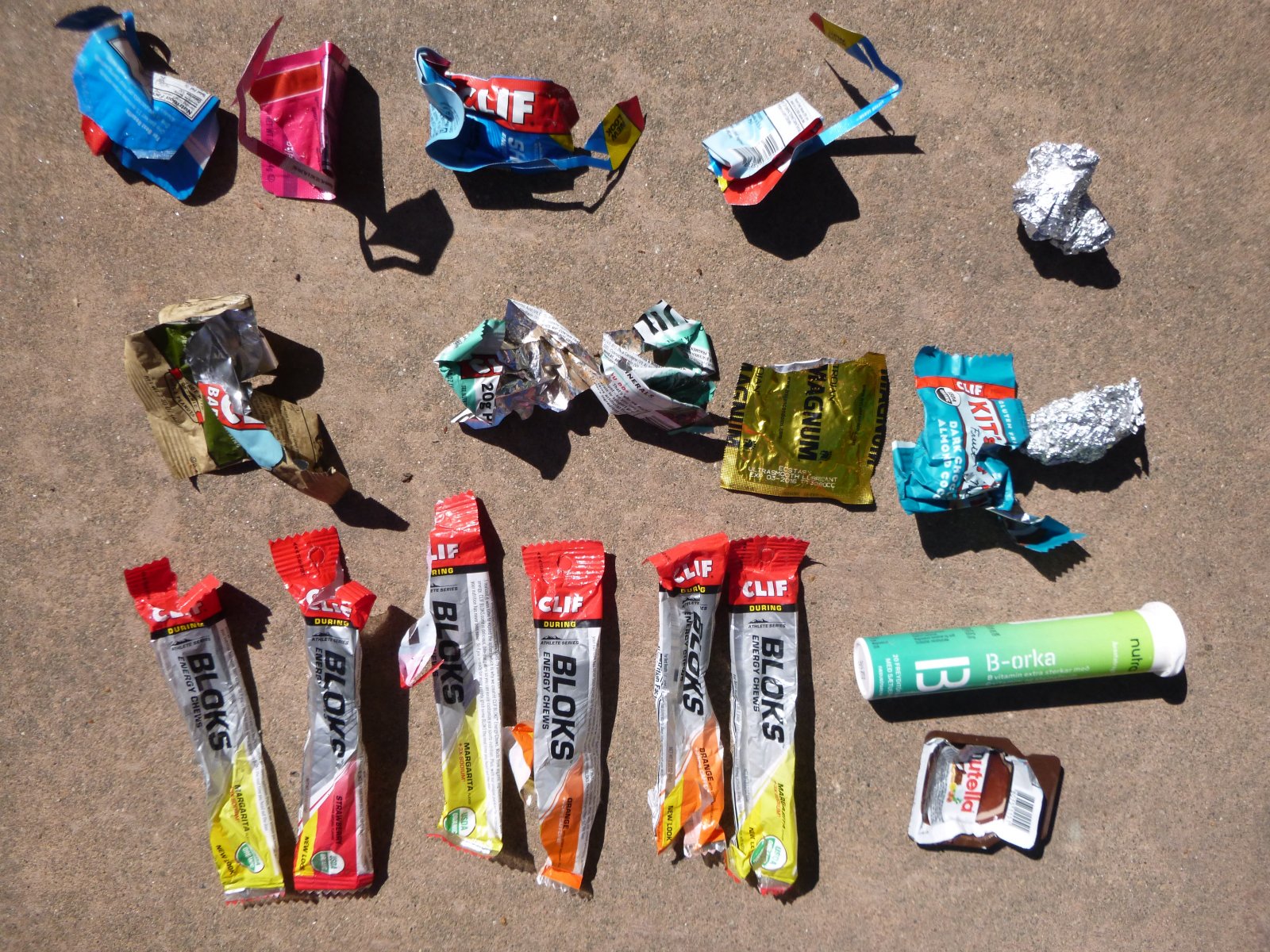 I'm really not sure I will do this full route again. I may have to file it under "once in a lifetime rides" with the White Mountain Epic. I do believe I have empirically derived the Coe Factor... comparing my average moving speed of this ride (7.8 mph) to that from my big Midpenapalooza Bay Area sendoff ride (11.0 mph) yields a Coe Factor of 1.4, which I think those who ride at Henry Coe State Park will agree is in the ballpark.