A story about buying cheap boots, mostly sitting in an office (or on a saddle) and never going hiking, and deciding to summit Mount Whitney at the end of a five day back country trip.

65 miles
I got a last minute call from a great buddy of mine who needed to escape from the rat race in Southern California with all of that crazy ‘work’ stuff to join him for a 5 day backpacking trip in the Golden Trout and Whitney Wilderness areas.

Brendan hails from Kernville, and his recently retired dad was gracious enough to shuttle us to the start, about 90 minutes outside of Kernville at Lloyd Meadows. 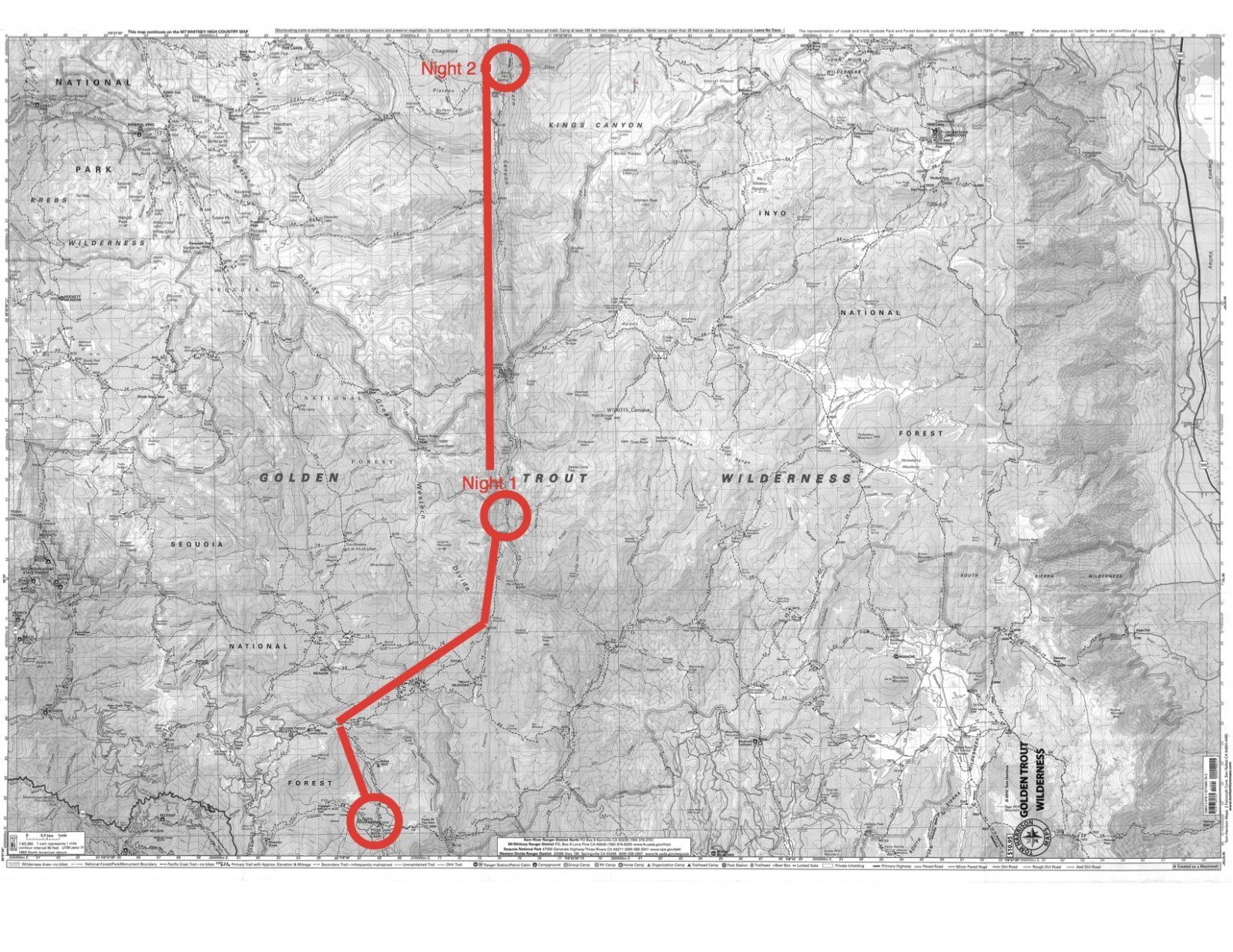 The Golden Trout Wilderness. Click to view an enlarged map. 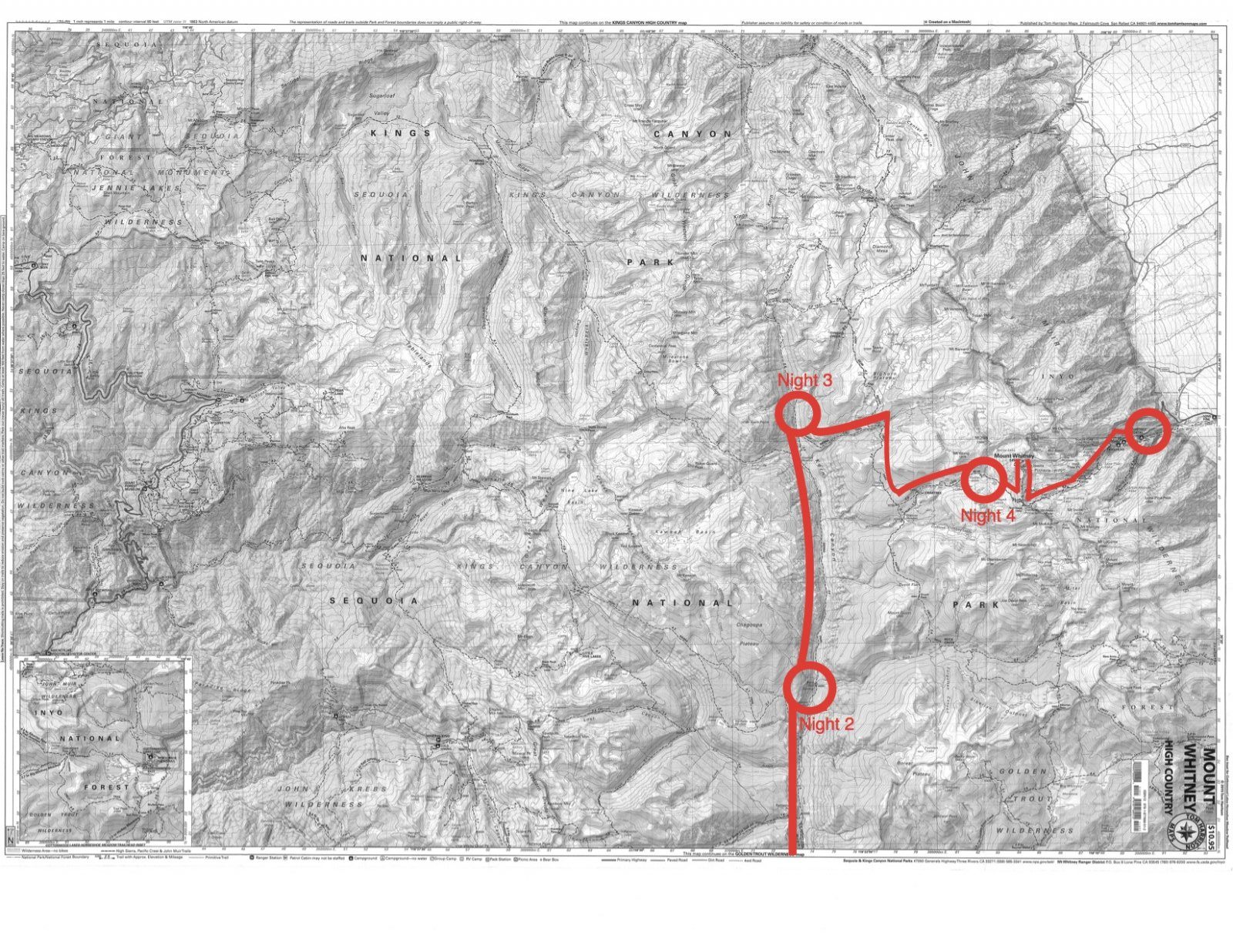 12 miles, mostly flat, sunny with a chance of blisters

Day one was relatively mellow. 12 miles of remembering how to walk, trying to adjust the pack so it was comfortable, and swatting little black flies. The majority of it was flat and downhill with no major climbs and was a good day to get the legs back under us. We only saw one soul, but of course it was a guy in full camo with a dog and guns and stuff. Ah, the eclectic mix of people you see out in the back country. 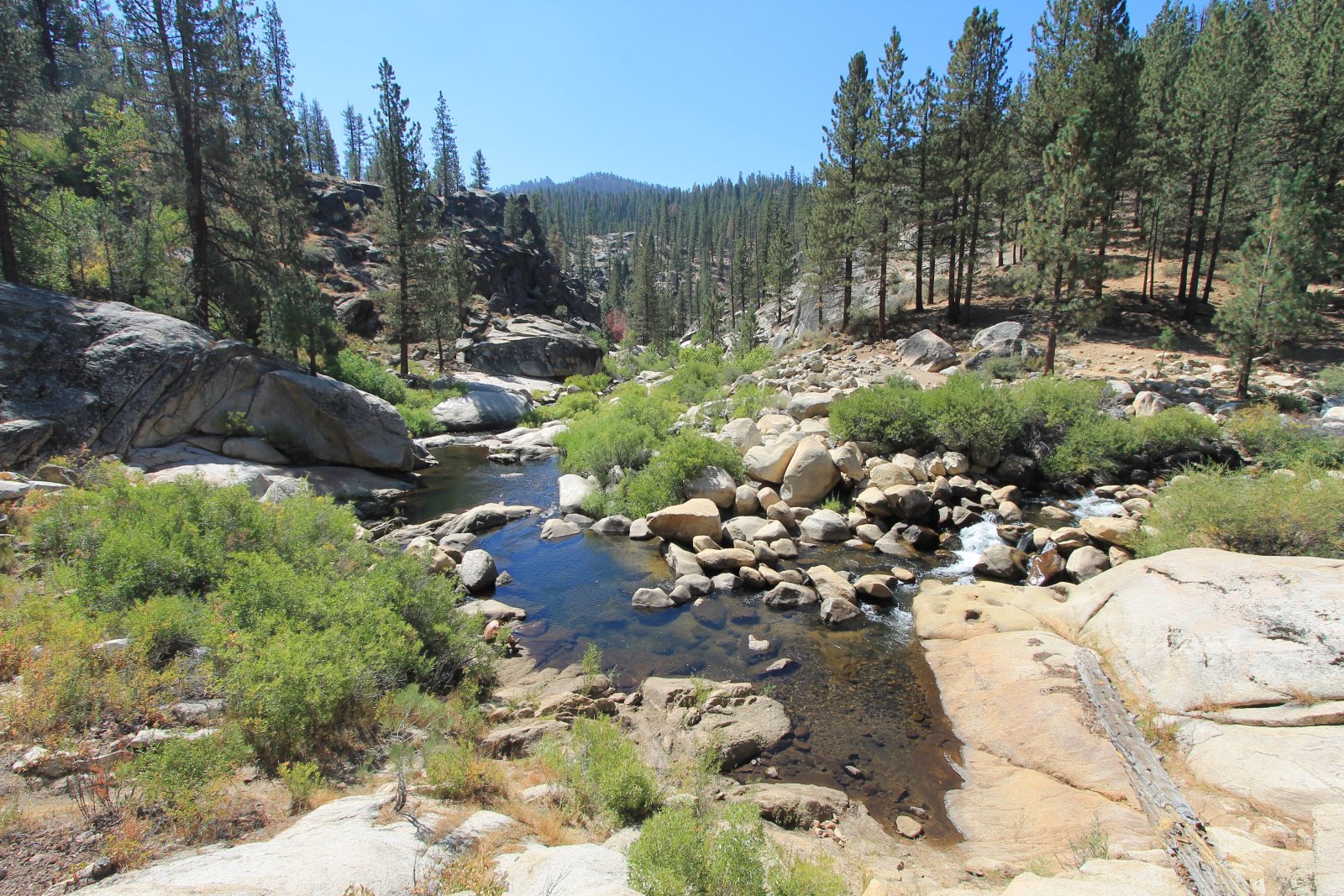 We crossed over the Little Kern River and finished the day hiking down into the Kern River valley which I quickly called ‘little Yosemite.’ 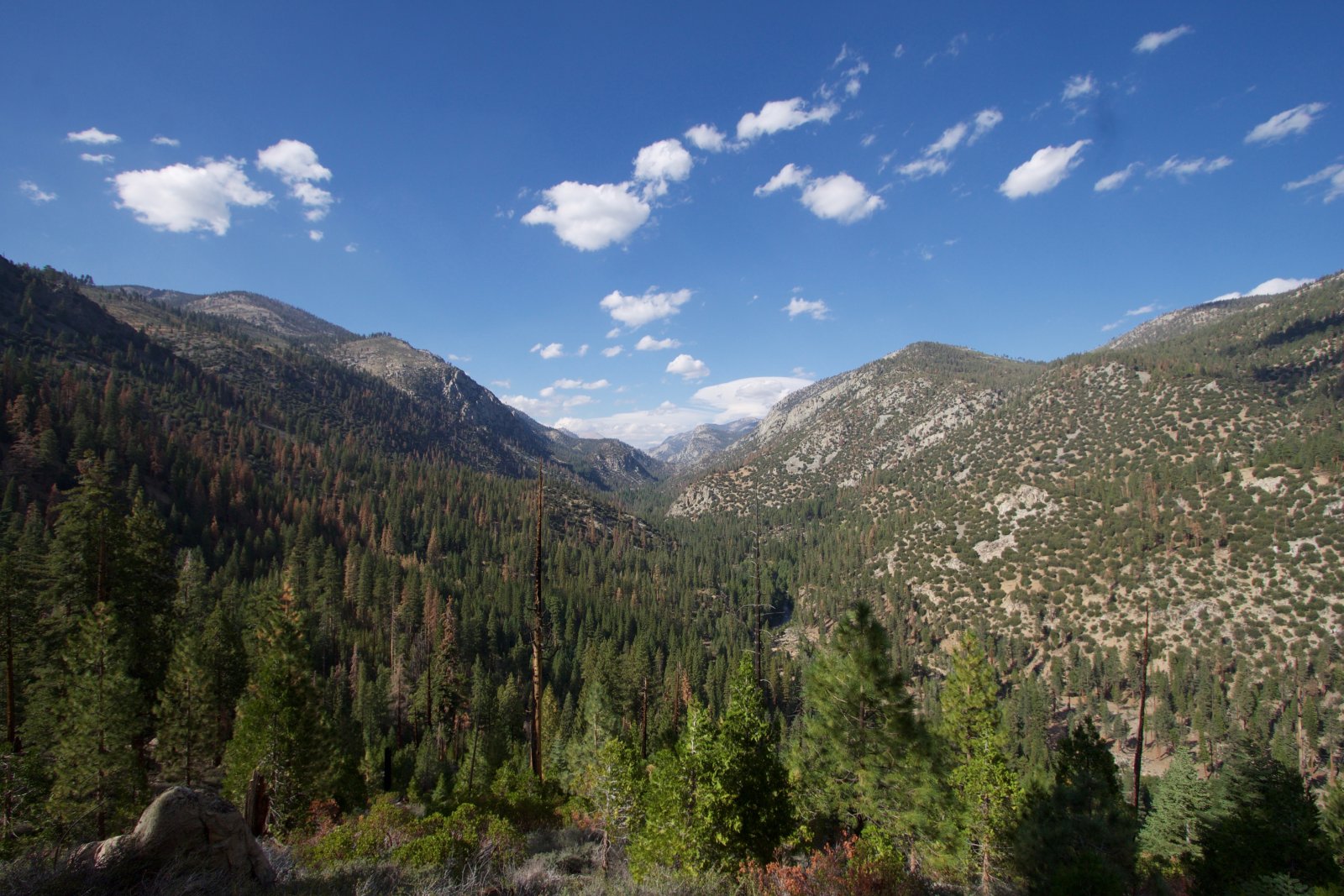 We set up camp on the river and spent some time fishing in the river and brought in 9 fish between the two of us, but only kept one for dessert as they were real tiny. Brendan’s feet were pretty beat up from having princess office feet/shitty hiking boots that were actually the exact same as mine. 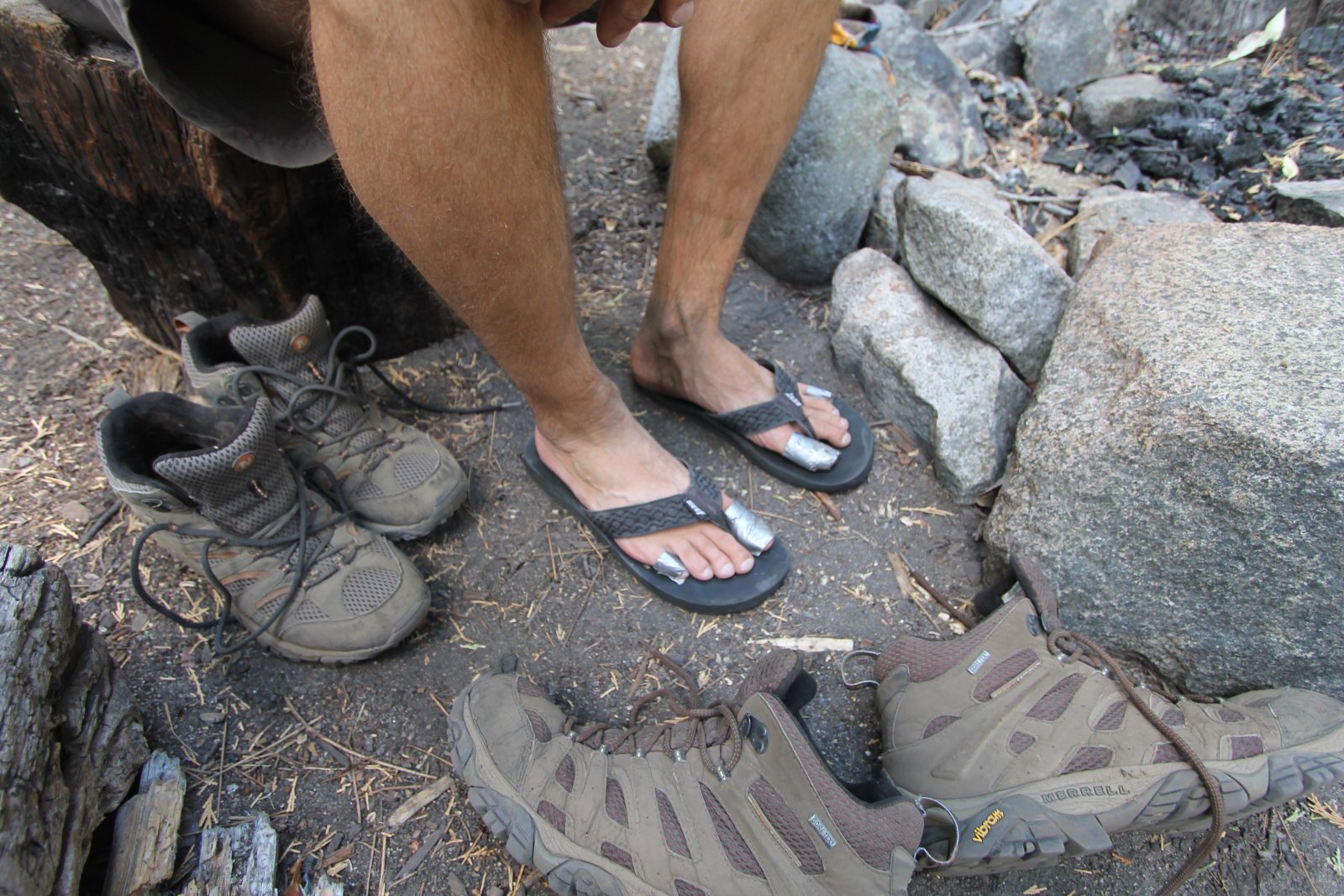 Day 2 was a big one. 16 miles, one decent climb early one, but just consistently slightly uphill following the Kern river. We passed two absurdly perfect-appearing fishing spots - one was a large clear, calm lake - the other was a picturesque meadow with the Kern river flowing through it. 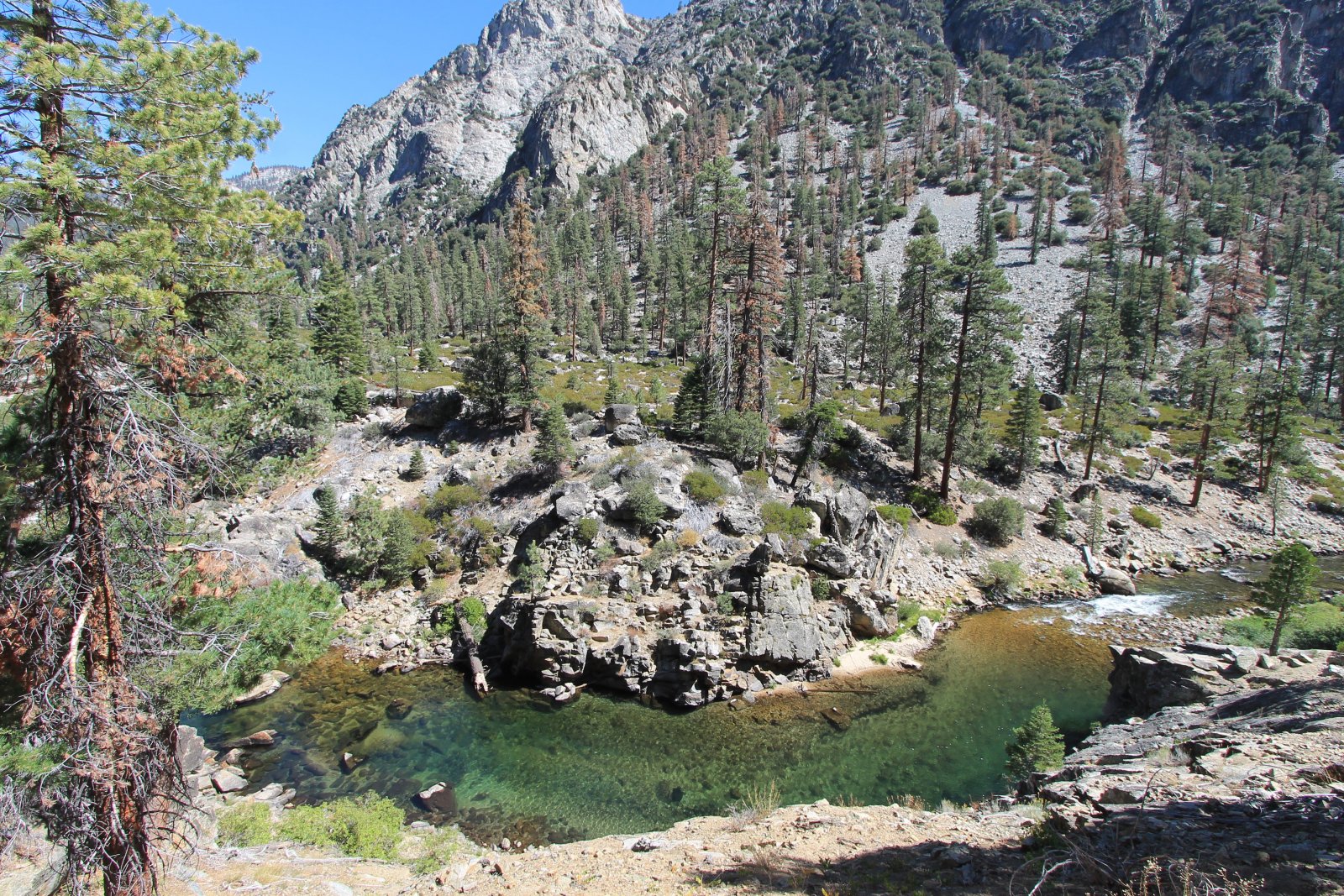 Sadly, we didn’t have time to stop and fish in these two spots, but I would do a trip again strictly to fish them, they were so perfect. We were on a mission to reach the Kern hot springs that day, but when we arrived in the late afternoon, we realized quite a few other people were too. There were about a dozen people camped in the area and the hot spring(s) were real cozy - think concrete bathtubs for two people if you are real close with the other person. We didn’t even try to get in that evening. Instead, I went fishing and caught a beautiful 13” rainbow trout and Brendan relaxed in the tent, trying to bring his incredibly blistered feet back to life. 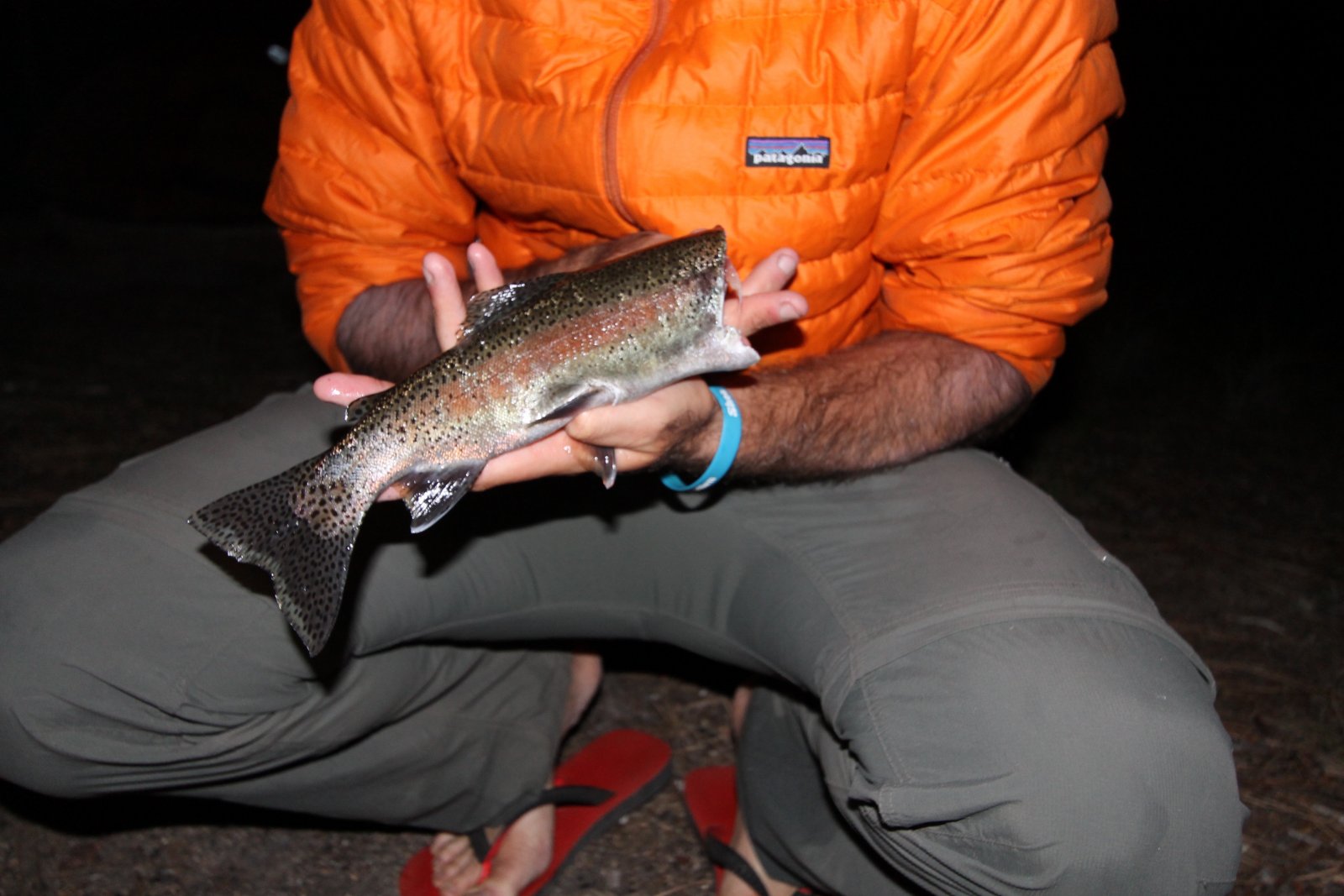 Day 3 started out perfectly. Brendan and I were both wrecked from the previous day. Everyone had left the area, so we went for a soak in the hot spring. It was the nicest and cleanest hot spring I have ever been in and was exactly what we needed. It was also the closest I have ever been to another naked man, but when in the wilderness… Or something like that. 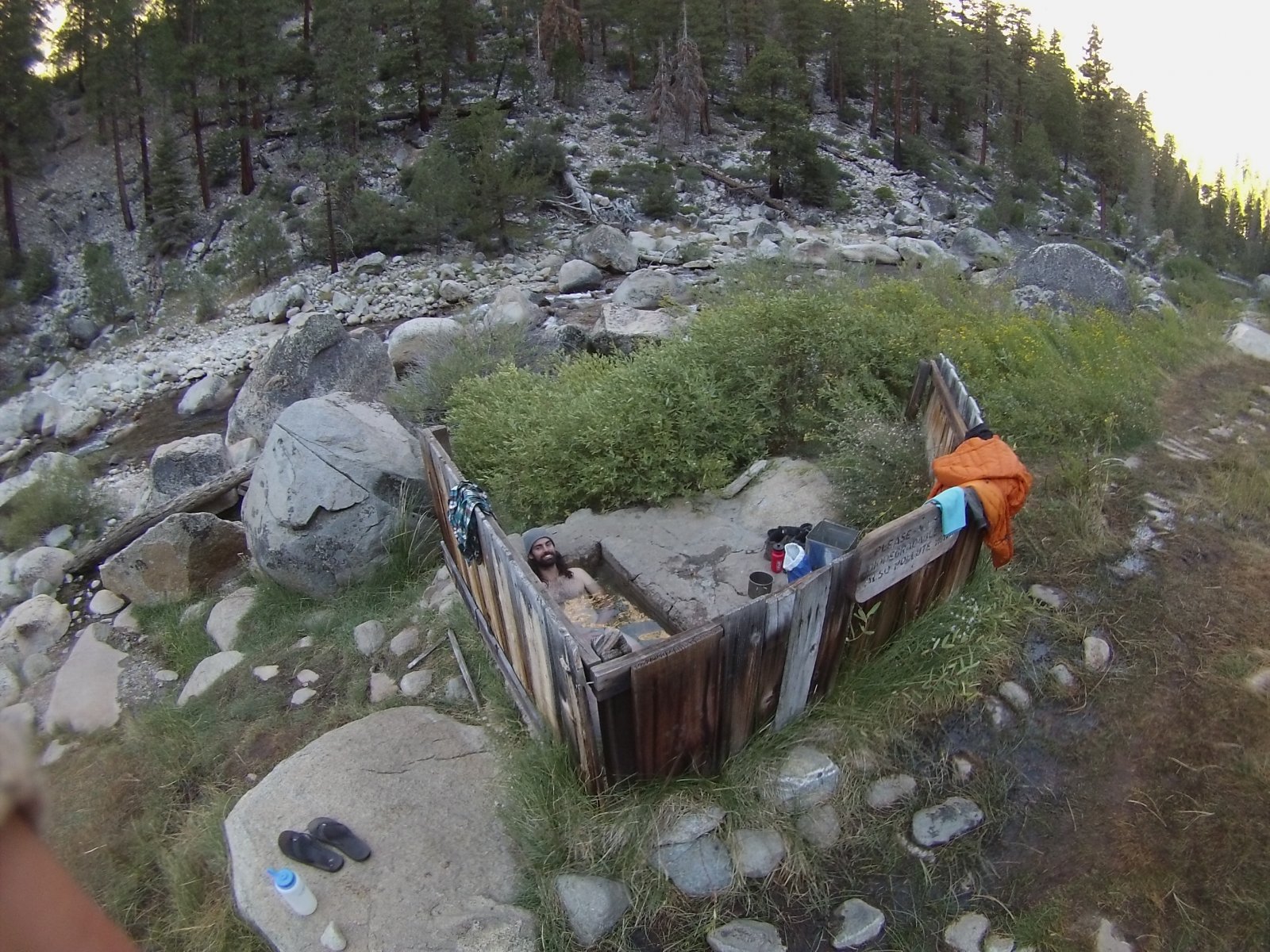 Today was a bit easier. 10 miles or so of light uphill, with a nasty 1 mile uphill at the end of the day. Brendan had to hike in his flip-flops as his feet were so wrecked. We stopped and fished a little along the way but didn’t have any luck. There were rustic remains of a log cabin where we stopped to camp. We both tried our hand at fishing once we set up camp and kept two small Golden Trout for dessert. 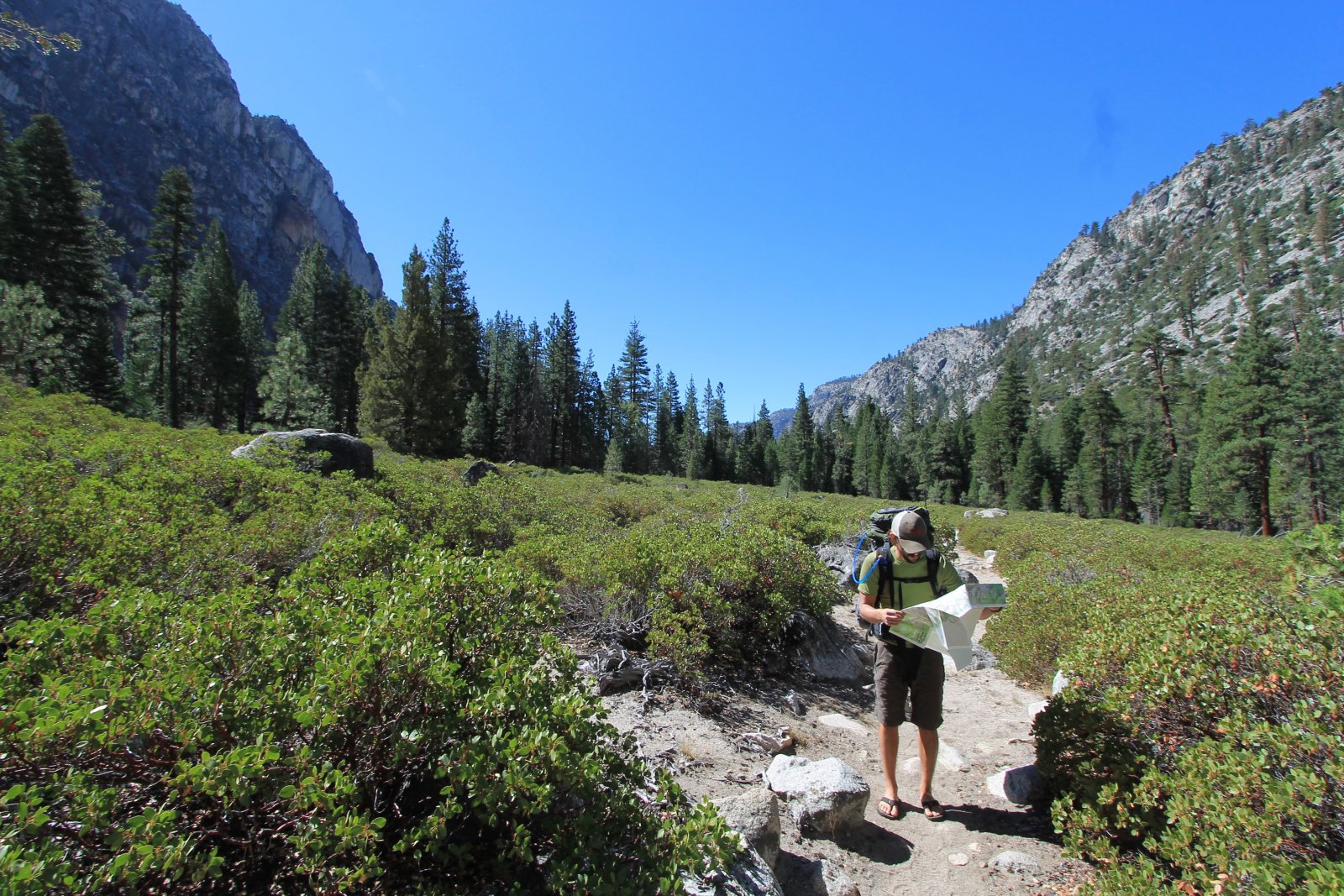 11 miles, up we go, this time with company

Day 4 was another shorter day at 11 miles, but we started going up, up, up. Brendan again knocked this day out in flip-flops because of his feet. 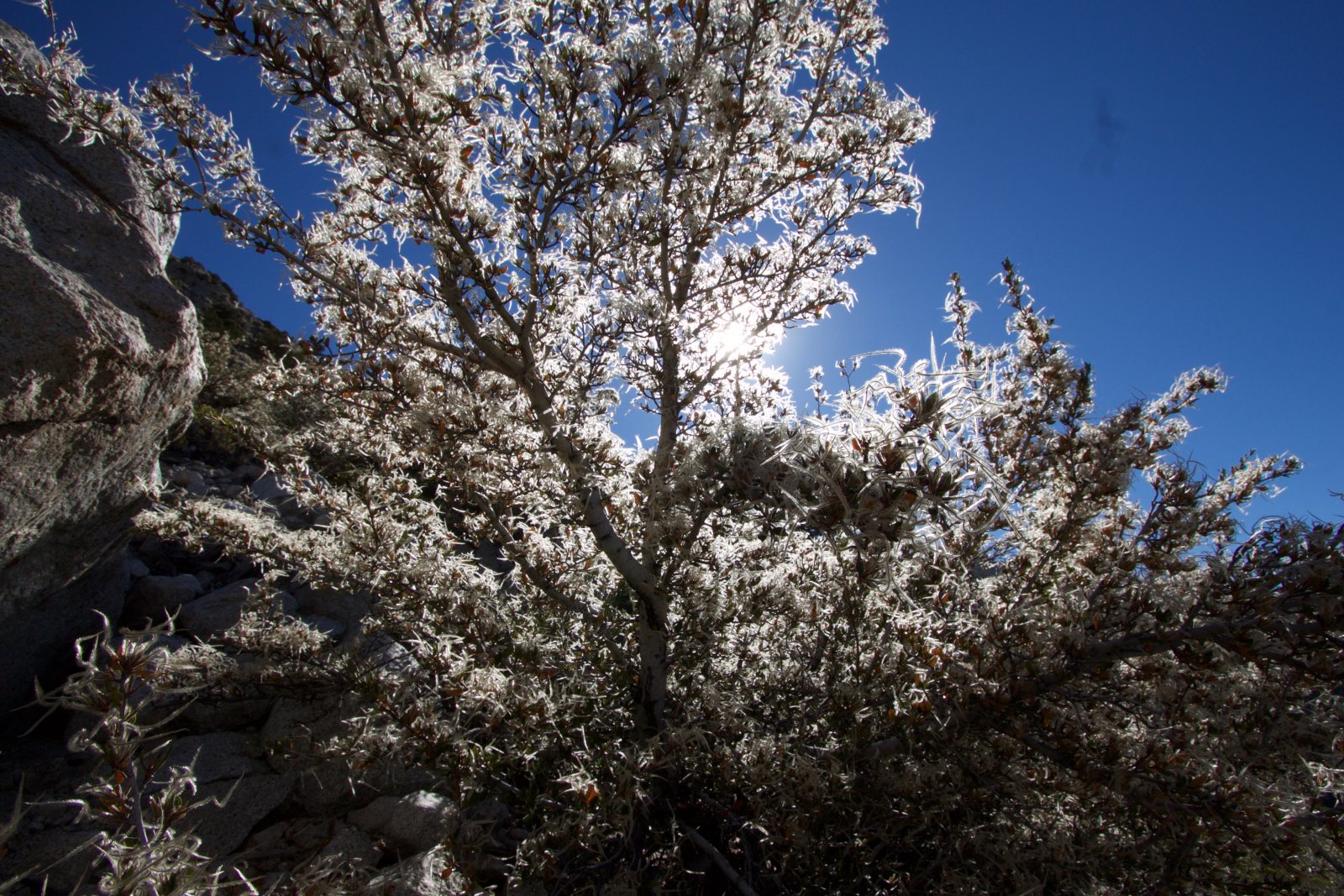 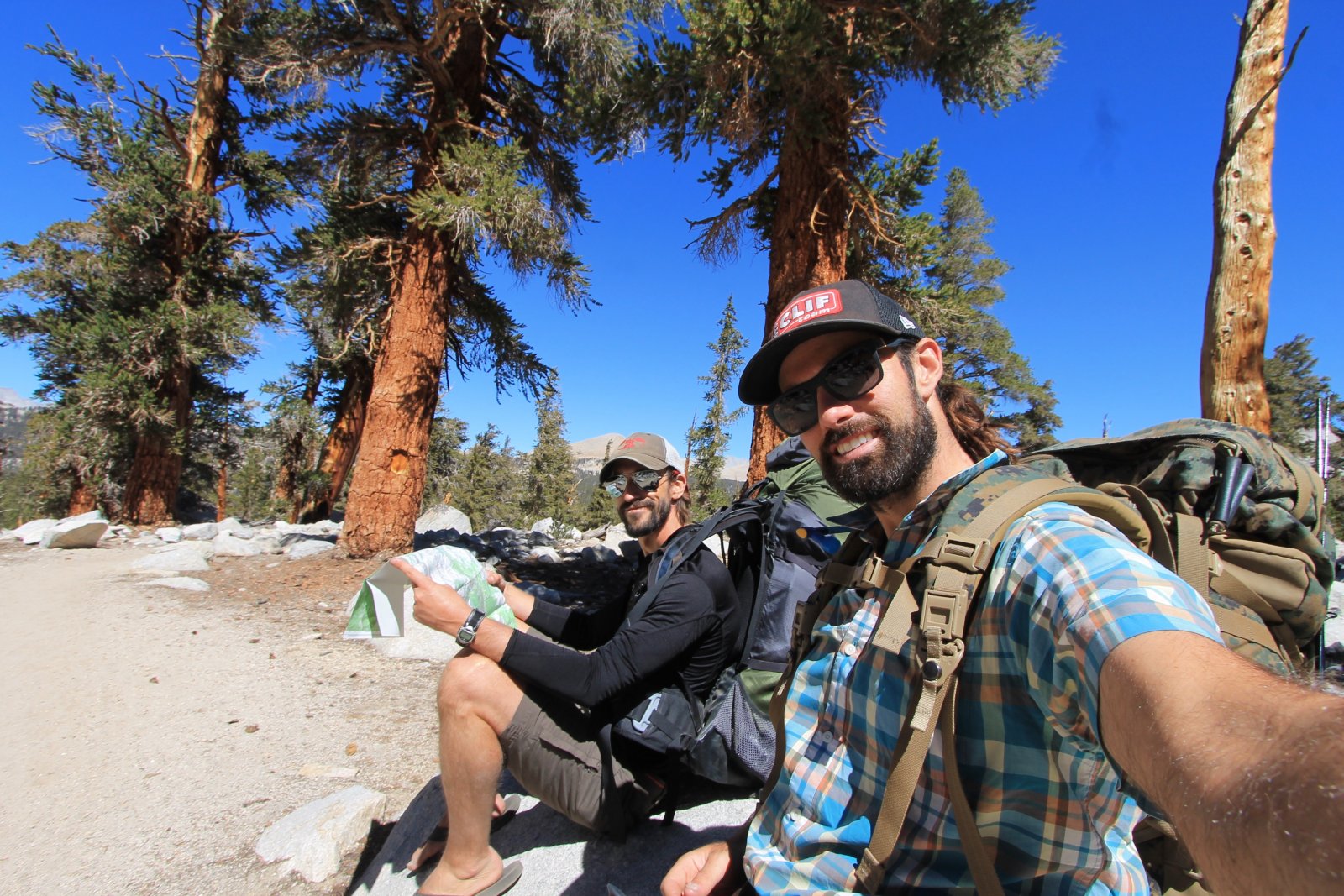 We bumped into three Canadian women half way through the day and chatted for a bit. They jokingly said that if we brought some fish, they would cook dinner. They had been hiking for 10 days from Red’s meadow and had shaved a day off their trip by putting in some extra miles, so had an extra day’s worth of food and wanted to do a potluck at Guitar lake at the base of the backside of Whitney. We took this as a challenge and stopped at another lake below Guitar lake and fished for a bit. 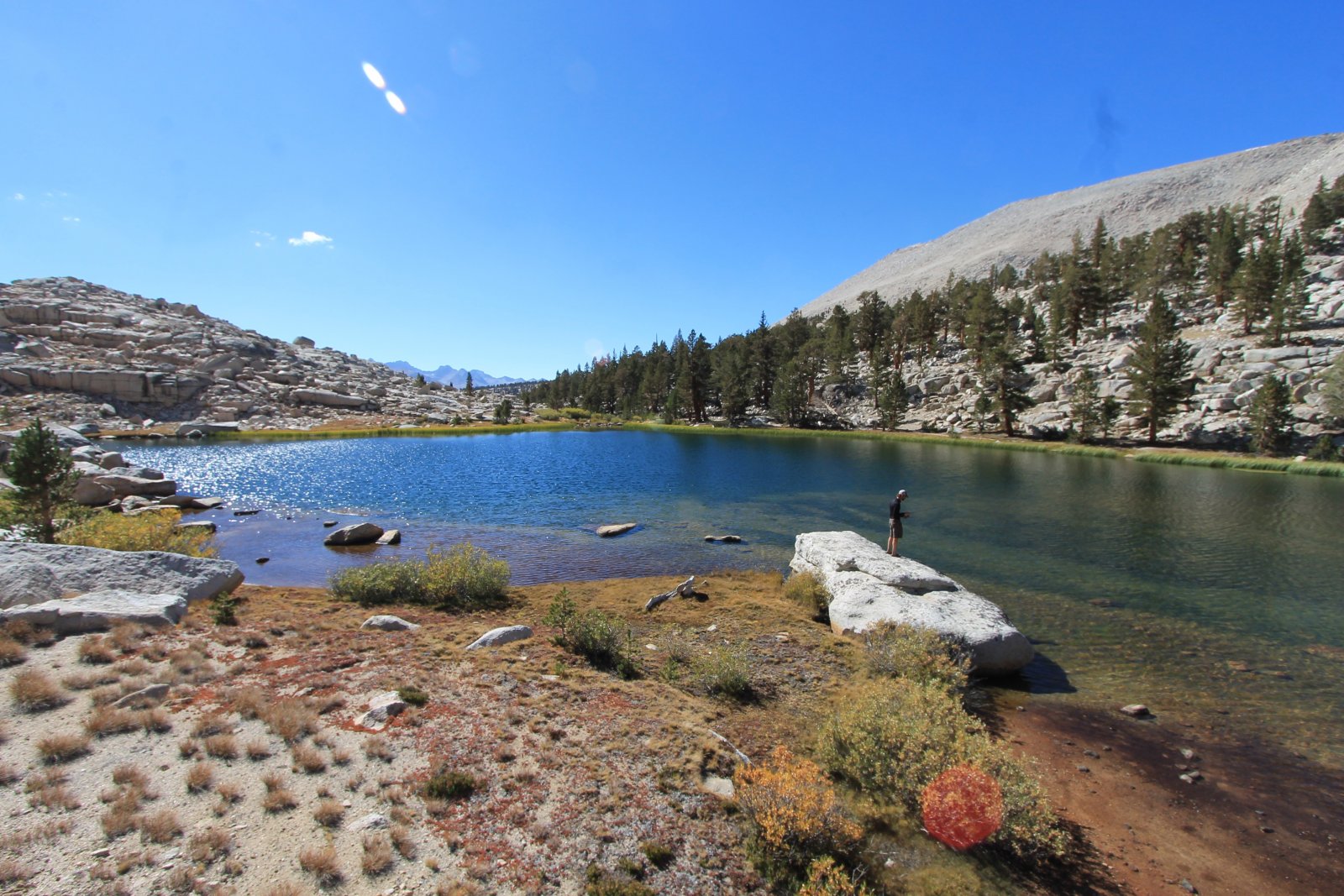 We brought in a few tiny Brook and Golden trout, but let them all go. We pushed upwards and above the treeline to Guitar lake. After we set up camp, I went fishing again and brought in two Golden trout which we later shared over dinner with the Canadians and two guys from Oregon who were just finishing up the John Muir Trail.

I stayed up late to catch the full moon rising above the Whitney saddle and shot some night shots. 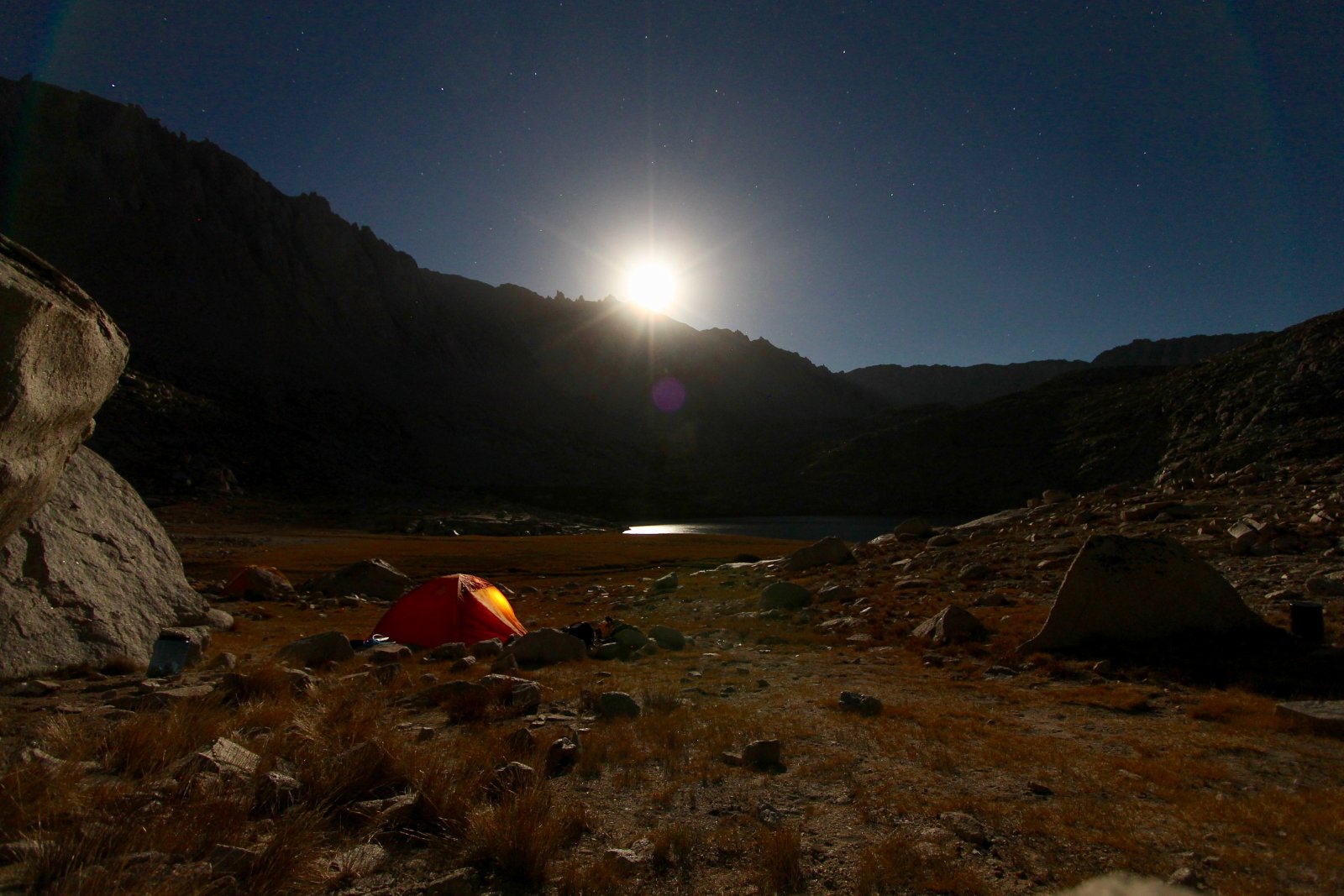 16 miles, summitting Whitney, stuffing ourselves after

Day 5 started off briskly. As in it was really cold and I should have brought gloves. With some ice and frost on the ground, we started off with a 3 mile 2,000’ ascent to the saddle on Mt. Whitney. We dropped our packs and just grabbed a water bottle and went for the summit. I finally exploded about 3/4 of a mile from the top and had to stop a few times in the last 30 minutes as the altitude finally got to me. Brendan and I shot a few pictures at the summit then headed back down as we still had a real long day ahead of us and it was chilly on the summit. 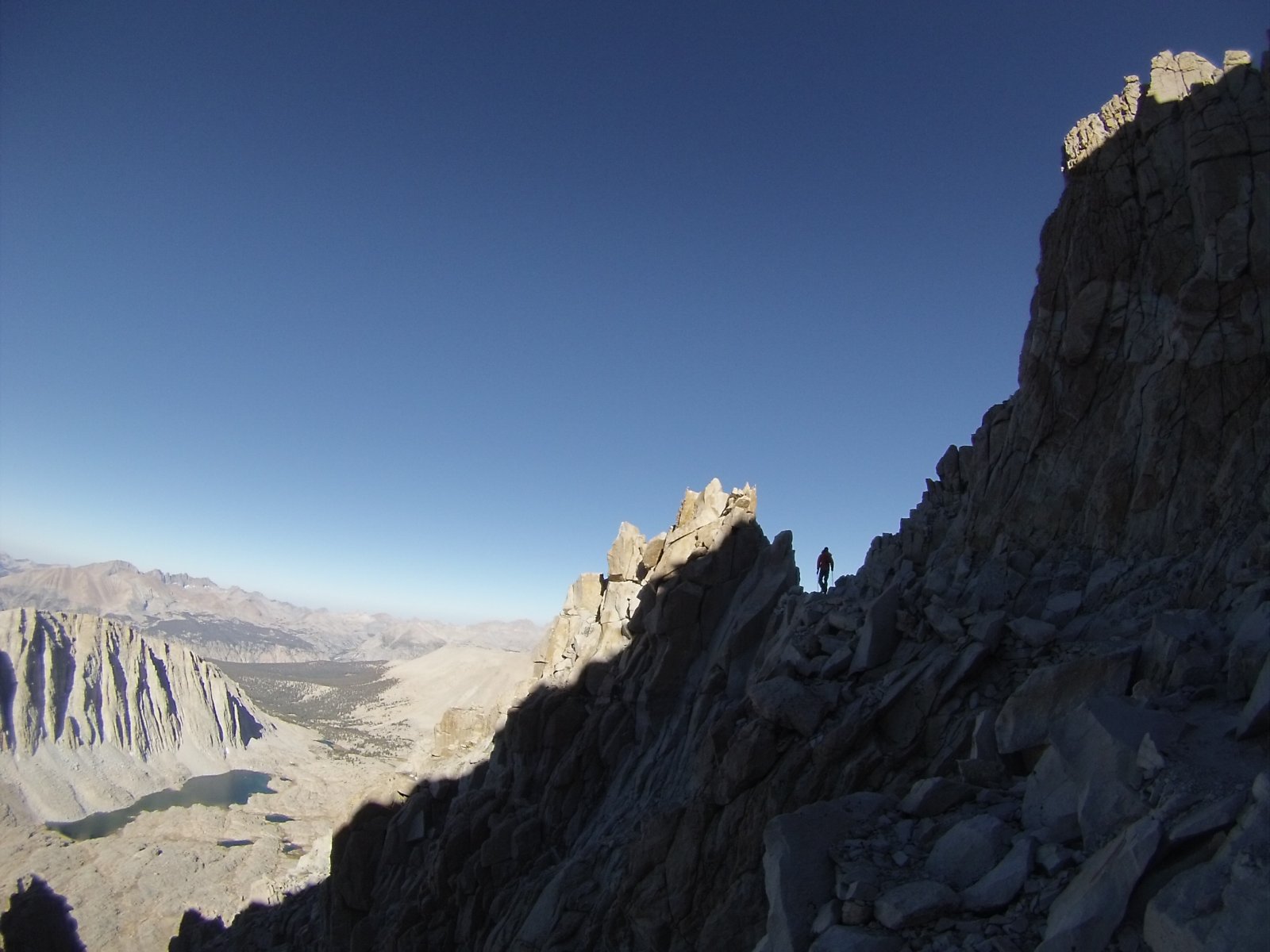 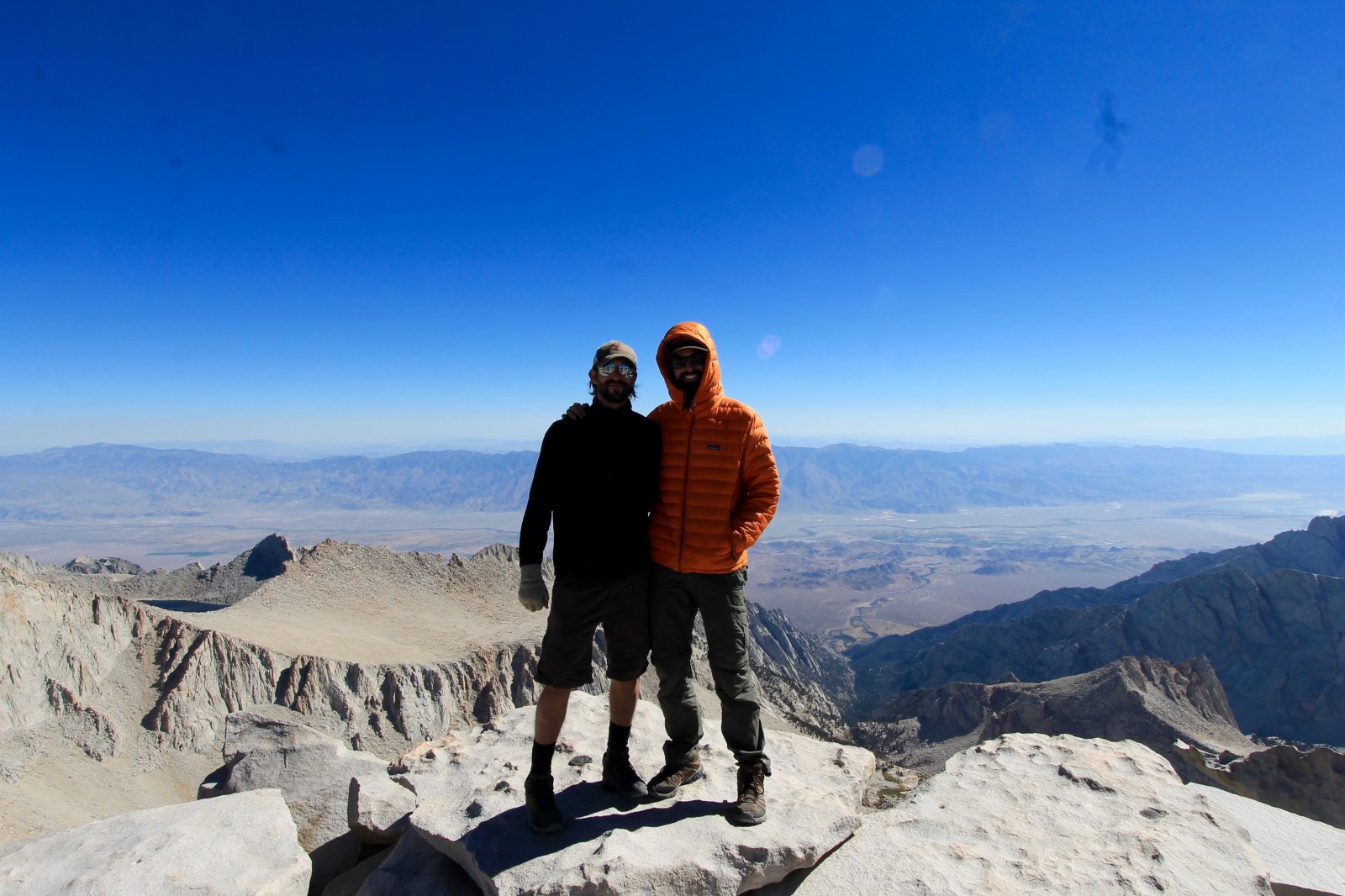 We grabbed our packs, fought off a hyper aggressive marmot that was trying to raid food from someone else’s pack, and began the 99 switchback descent. 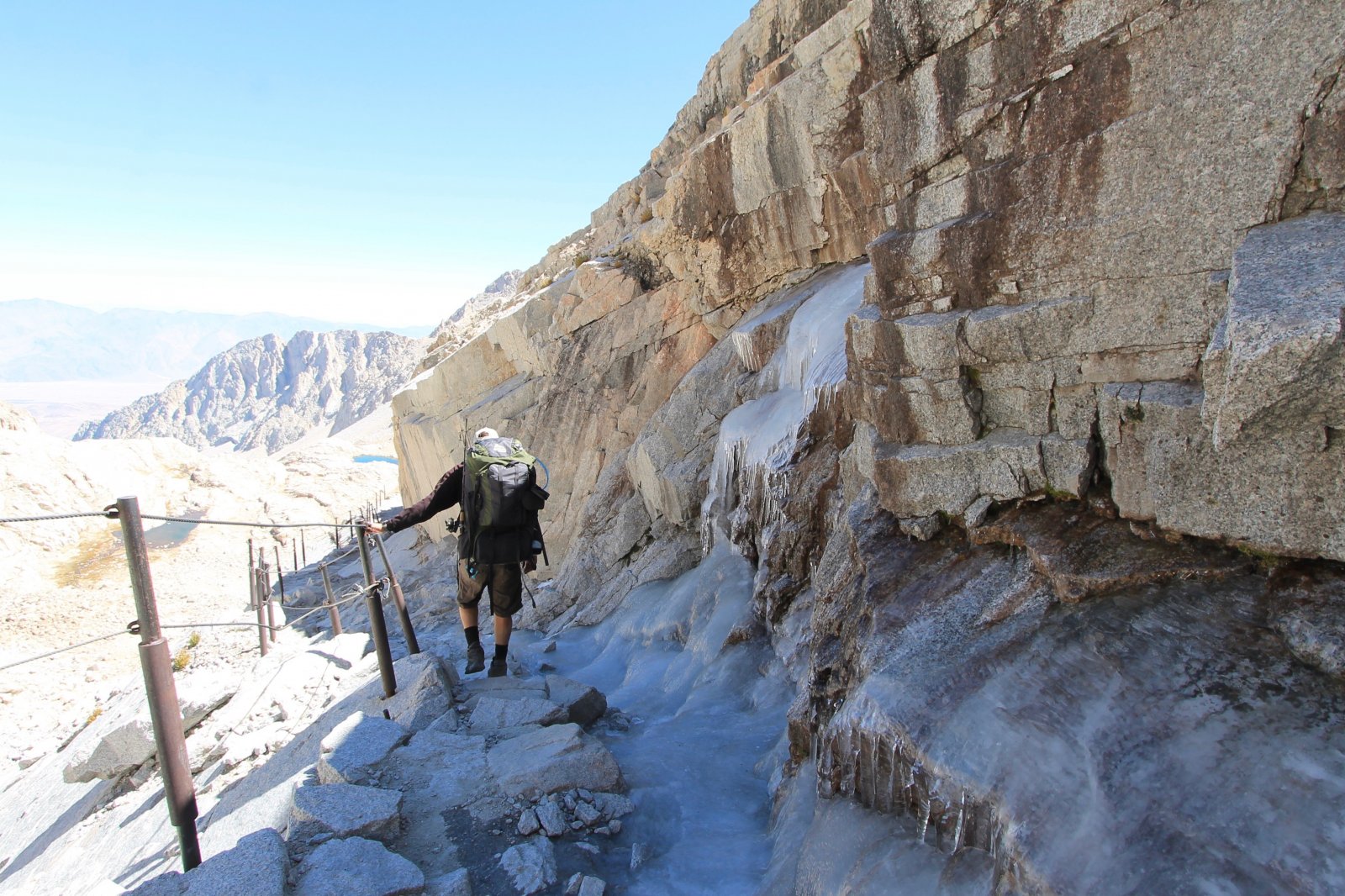 Our feet were screaming. Mine had finally succumbed to blisters and Brendan had put his boots back on for the big summit and descent. Never, ever, buy the cheap Merrill boots from REI. Trust us. We bumped into the guys finishing up the JMT a couple more times on the descent a few times which helped knock out the miles. This was definitely the hardest day of the five, and we were mentally and physically pretty cracked at the end of the 16 mile day. 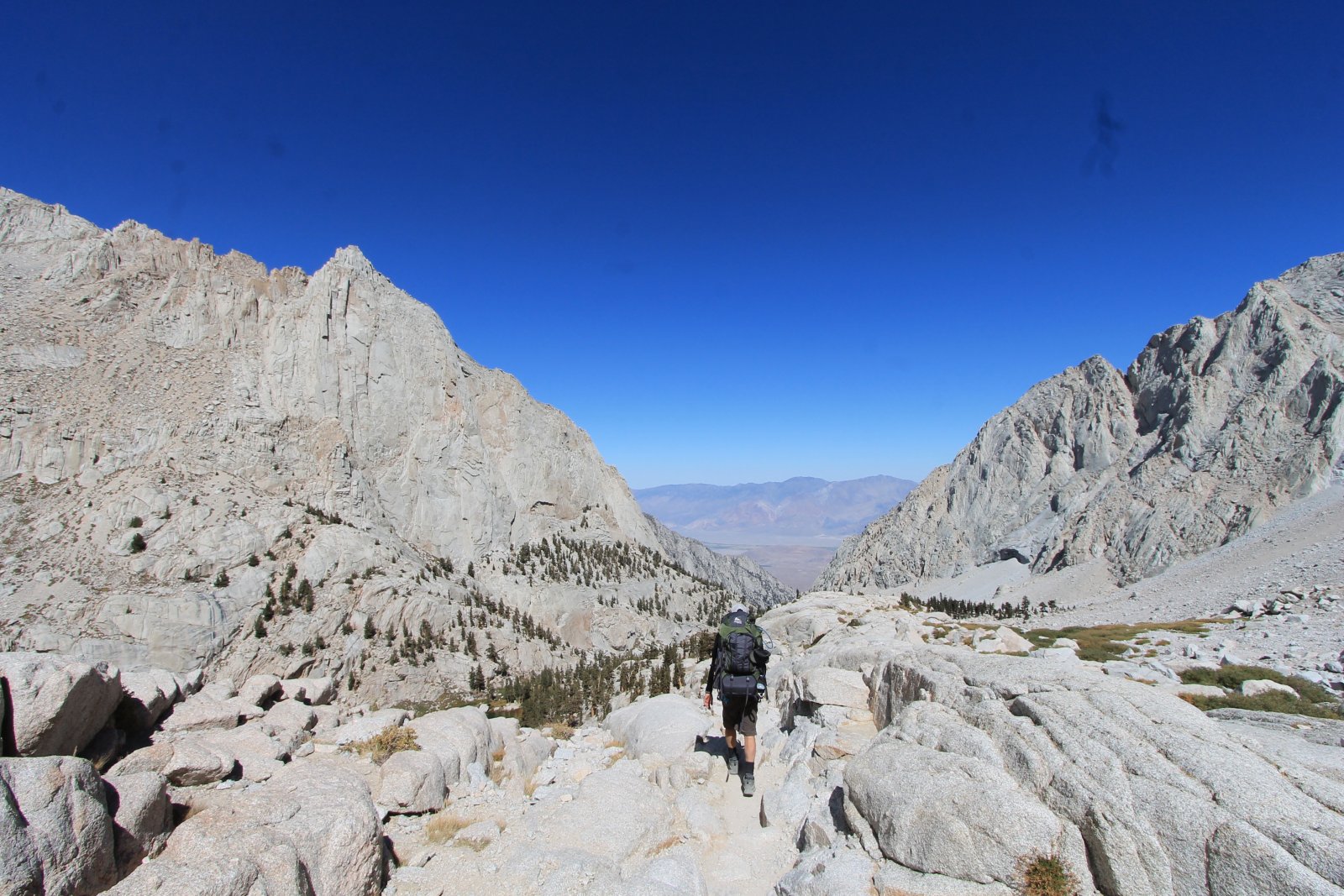 Brendan’s dad, Tom, hiked up a bit from the Whitney portal and helped us make it the last mile back to the car. We stopped down in Lone Pine and ate a whole lot of food before making the drive back to Kernville and then San Luis Obispo that night.

It was an amazing trip, a great distance, and a relatively ‘easy’ way to acclimate and summit Mt. Whitney. Thanks for the call Brendan!

There are 4 comments for this article