Sunday, December 8, 2019 was one of the most fulfilling days of my athletic career. Instead of chasing my own goal, I was a pacer at the California International Marathon (CIM) for the women’s Olympic Trials qualifying time (2:45). It was my first real road marathon, so I had some doubts, but in the end the #windwall of Chris Stehula (6’3”), and Ken Rakestraw (6’5”), and I (6’5”) ran nice even splits and helped seventy-two women qualify, about forty of whom were within only 90 seconds of the magic time. After splitting up with 10k to go to take a few different groups the full distance at their own respective paces, we all finished between 2:44:40 and 2:44:57! 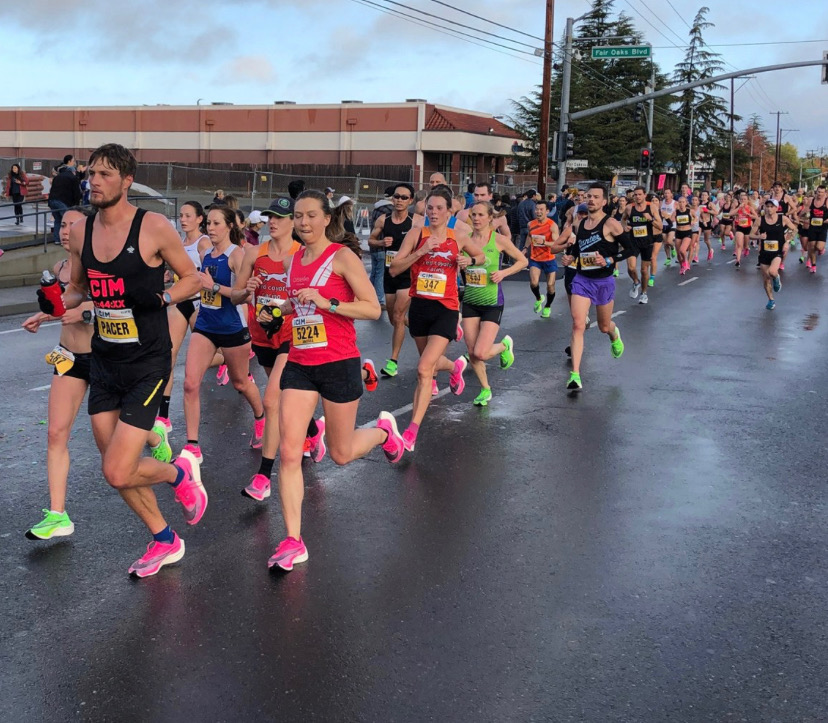 Hear my fellow pacers and me discuss this story on the Ali on the Run Show podcast!

In The Truman Show, Jim Carrey’s character comes to the realization that his life is actually a scripted TV show, and all his supposed friends and family are role-playing actors. The movie explores the psychological condition known as Protagonist Syndrome, in which one feels that existence is a story arc built around their own life. It would be easy to make me the main character in this story.

I could describe the four semi-solid months of training I put in, the injuries, and the times I just wanted to get back on my mountain bike. I have my own cast of supporting actors: my fellow pacers, my loving wife, and the weekly trail run group who get me out on the hills once a week. I have the lessons learned from coaches back in high school, Ken and Stehula’s hilarious banter in our six month long group text, and the various CIM folks who allowed us to take on this duty. I owe them all a huge thanks for their efforts and trust in me.

I might list my training secrets, delve into the nitty gritty, and profess my doubts. That story is far from compelling. I drew upon form that carried me to decent results as a high school 1600- and 3200-meter runner, and then, bolstered by fitness gains from twelve years spent as a “professional” cyclist, ran eleven 40ish-mile weeks between mid-August and late-November. Interspersed with an uphill half marathon, a bonk-fest trail marathon, and some ridiculously awesome bike rides I just couldn’t pass on, I did (almost) weekly tempo runs modeled after my bike training. Five intervals at 6:10-20 per mile, five minutes shuffling recovery, starting with 12-minute reps and progressing to 15-20 minute reps near the end. I didn’t have to build speed for 6:17.86 pace, just fitness to get the legs accustomed to holding it.

I could chronicle the race from my perspective as a runner and an athlete; how the early miles flew by, and how much that caffeinated gel helped in the last 10k.

But this isn’t my story.

This is seventy-two individual stories, seventy-two lead actresses, seventy-two marathon protagonists. In this story, we #windwall giants were proud supporting actors, and it brings tears to my eyes reading all the articles, blog posts, and social media from our leading ladies. Each and every one of them had put in the miles and hours, endured setbacks, and experienced breakthroughs. For some, this might be their proudest athletic accomplishment; the vast majority harbor no dreams of being one of the fortunate three to go to Tokyo 2020. Their motivations are inspiring, and for their efforts they have earned a title that can never be taken away: Olympic Trials Qualifier.

Nervous energy filled the room at the 2pm Saturday Elite meeting. Some of it was mine. Stehula diffused it all by announcing his height and weight to the assembled crowd, and then requesting that Ken and I stand up to tower over him. Stehula asked who was going for OTQ. The conference hall rippled with raised hands. He then declared that we would be a sort of backstop version of the World Record lines superimposed on screen during Olympic events. All they had to do, he said, was finish just in front of him. It began to really dawn on me that we were about to be part of something special.

From the gun, I obsessively checked the average pace on my GPS watch. 6:10 to 6:20, no faster, no slower. My biggest fear was that I was going to end up the unwitting villain in dozens of stories, coercing the huge pack of hopefuls to borrow seconds in the open half that would be paid back in minutes later. Either that or I was going to stomp on somebody and end their race, since my stride length was about 50% longer than that of those surrounding me. Of course, proper pacing is an art. The CIM course drops more elevation in the first half, and undulating terrain make exact mile splits unrealistic, so team #windwall decided to only pay attention to 5k splits. We took them so seriously that we had them printed on the back of our custom Rabbit singlets. I’d say we did pretty well with that. 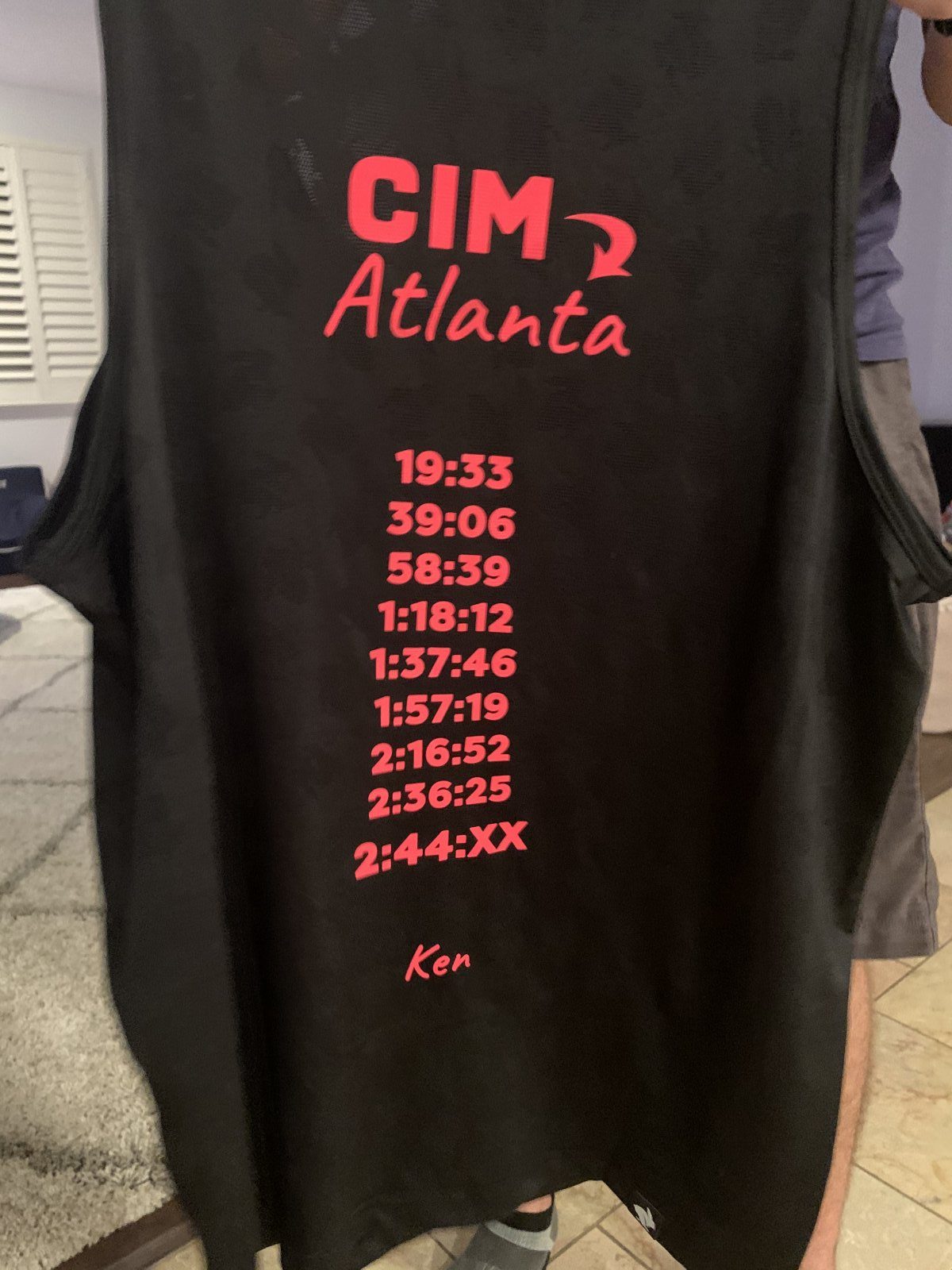 At the half, I led a group of several dozen through in 1:22:04, with Ken and Stehula leading a second pack ten seconds back. Not too fast, not too slow. Between miles 6 and 18, my frequent announcement as hills appeared was “Relax on the uphill, we have some seconds in the bank, you’ve earned it!”. I noticed that I was not the only supporting actor during this time. A few men running at the front with me were clearly there to assist. Loving husbands and boyfriends, some faster and sacrificing their own ambitions, others slower, pacing as long as they could before dropping back with a prayer that they would be greeted at the line by a huge smile.

There’s been a fair amount of talk lately about how the women’s OTQ time might be too soft, and it will likely be lowered to 2:43 for 2024. I disagree, and the joy, heartbreak, and emotion I witnessed on Sunday and in the following days has cemented my opinion. For the fifty or so women who qualified with 90 seconds or less to spare, a somewhat attainable OTQ time had to rank pretty highly amongst their motivators to improve themselves. In Atlanta, they will be pack fill, but, realistically, only about a dozen out of the hundreds that will show up have any chance of fighting for the top three.

But their stories certainly do not end there. The general American public doesn’t pay much attention to niche sports, heck, when my wife told her parents that I ran a 2:44:47 marathon, my in laws’ response was basically, “That’s great! Good for him”. 2:45… 3:45… non-runners don’t know the difference. There is a word, though, that everyone is familiar with: “Olympic”.

Fellow pacer Ken told one woman in the closing 5k to “go make your parents proud!”. Hopefully those parents were already aware of what a 2:45 marathon requires of and demonstrates about a person, but there is no guarantee that any coworkers on Monday morning truly comprehended why some of us were going to absurd lengths to avoid walking down stairs. For seventy-two women, they had a short explanation any American would understand.

Some of those seventy-two will go on to coach and inspire middle school or high school athletes and others in their communities. Their young charges will listen to and respect their coaches, knowing that they are guided by Olympic Trials Qualifiers. The leading actresses become the next supporting characters, positive agents seeding exponential growth in a sport so many of us love.

For the 2020 Olympic cycle, eight minutes separate the women’s A Standard (2:37) and B Standard (2:45), but only four for the men (2:15 and 2:19). I don’t know what the standards “should” be. I can tell you I personally have zero chance at 2:19, but might have been inspired to take a stab if it had been closer to 2:25. Even if I had fallen five minutes short, I would have been a more committed and capable runner as a result, gone to more races, and maybe more profoundly embedded myself in my local running community. I understand the desire to reserve the Olympic Trials for the true Elites, but right now, OTQ is the best we have to communicate our commitment and achievement to the world outside the bubble.

With 10k to go, small packs had broken away and pushed on to finish 2-3 minutes ahead of pace. As the pace group thinned, the three of us pacers came back together to put the finish plan in motion. With some runners on their limits, the pavement wet, and a 90° turn 150 yards from the finish, we had been instructed to split into three groups to avoid a mad dash for the money. Without much verbal communication, Ken took the front and brought a group home in 2:44:40 and I took the middle in 2:44:51 gun time. Stehula bummed an almost-empty gel from me in order to live up to his speech at the meeting the day before, coming in at 2:44:57, a glorious 6'3, 190 pound manifestation of the red lines scrolling across the track and pool during Olympic broadcasts.

For about a dozen women, their finish times fell just on the wrong side of 2:45. Witnessing their journeys was no less inspiring. I came upon them fading in the closing 5 kilometers, and implored them to hang with me to the end, to the point that I was hoarse from yelling encouragement. In the days since, we pacers have seen their social media posts and received messaged from many of them, all positive. For most, 2:45:xx was a massive personal best, for some, by over ten minutes. Several are already committed to take another swing at it in Houston on January 19, 2020. Bittersweet, but enduring and inspiring. I still can’t silence a little voice in my head saying “Maybe if you paced a mile here faster and a mile there slower, a few more might have made it”.

Since my first running race back in third or fourth grade, I have crossed literally hundreds of finish lines on my feet and by bicycle. I’ve stood on podiums at national championships, set PR’s, bonked and crumbled, and come back for more. None of those experiences were the same as yelling encouragement at 6:16 mile pace for just under 2 hours and 45 minutes. In the week leading up to CIM, I couldn’t wait for it to be over so I could go back to long mountain bike rides. Now, after an emotional week witnessing outpourings of passion and joy, my running inspiration is renewed.

See All the Finish Line Feels When 29 Women Qualify for the U.S. Olympic Trials in 59 Seconds
4 Runners on (Barely) Qualifying for the Olympic Trials 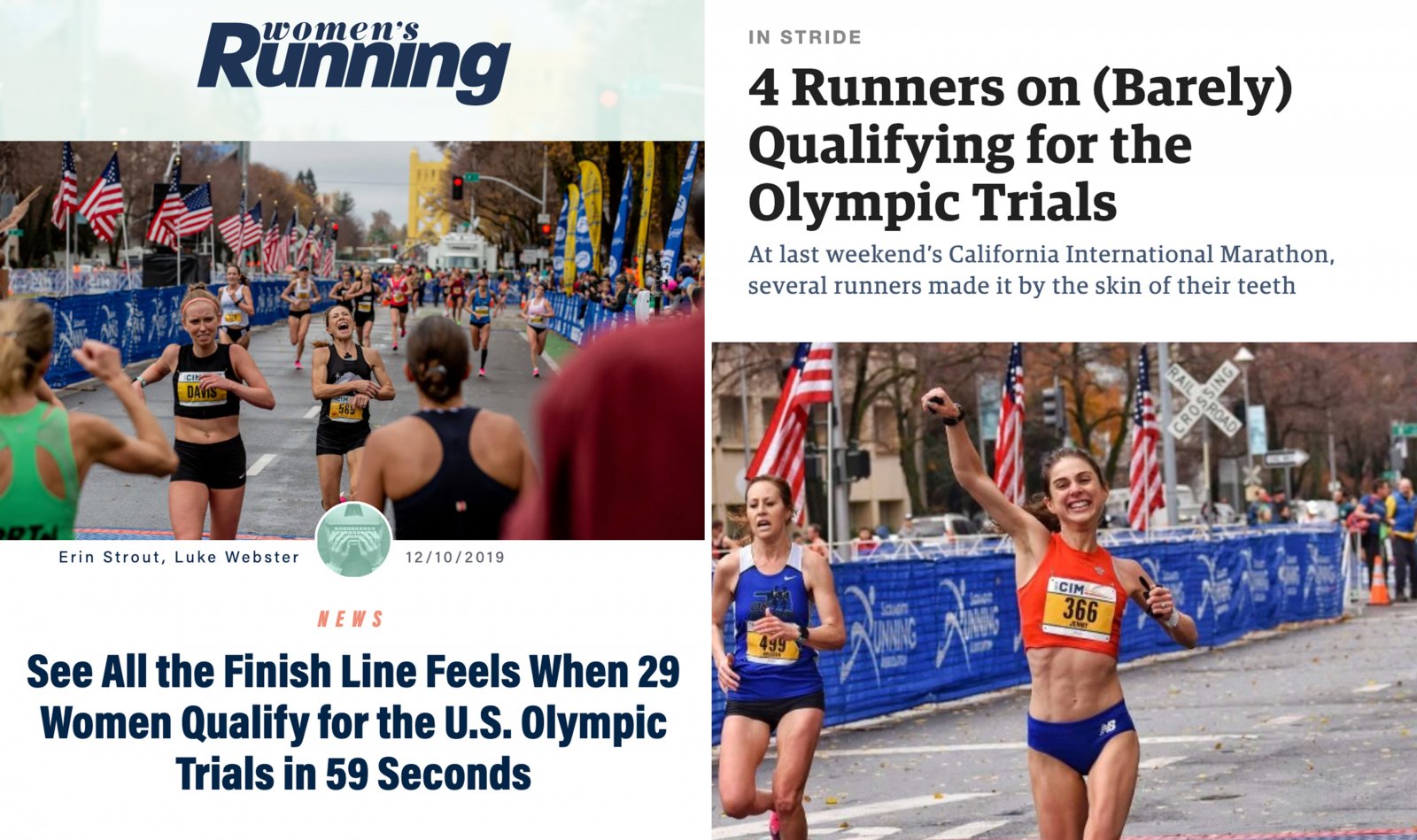 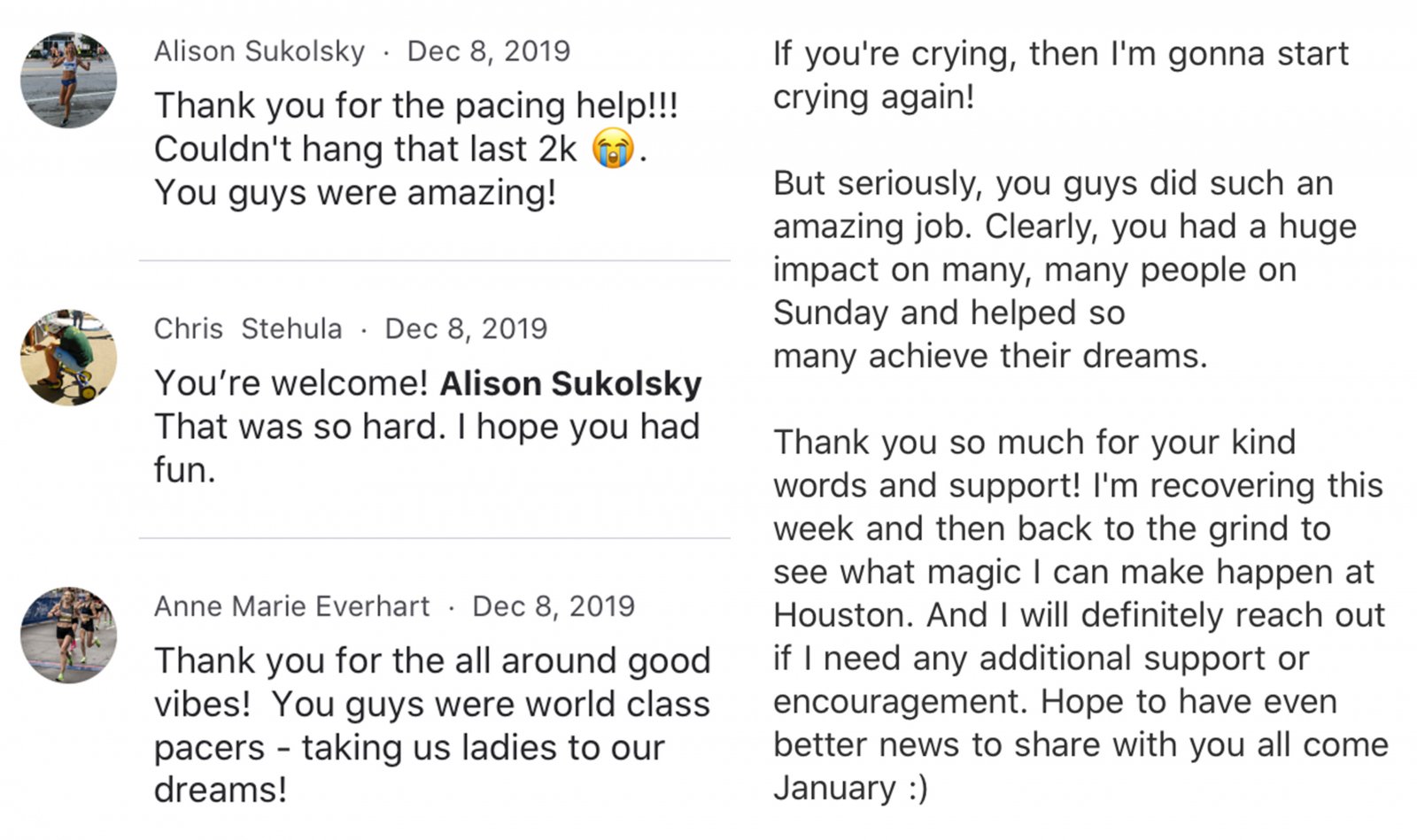 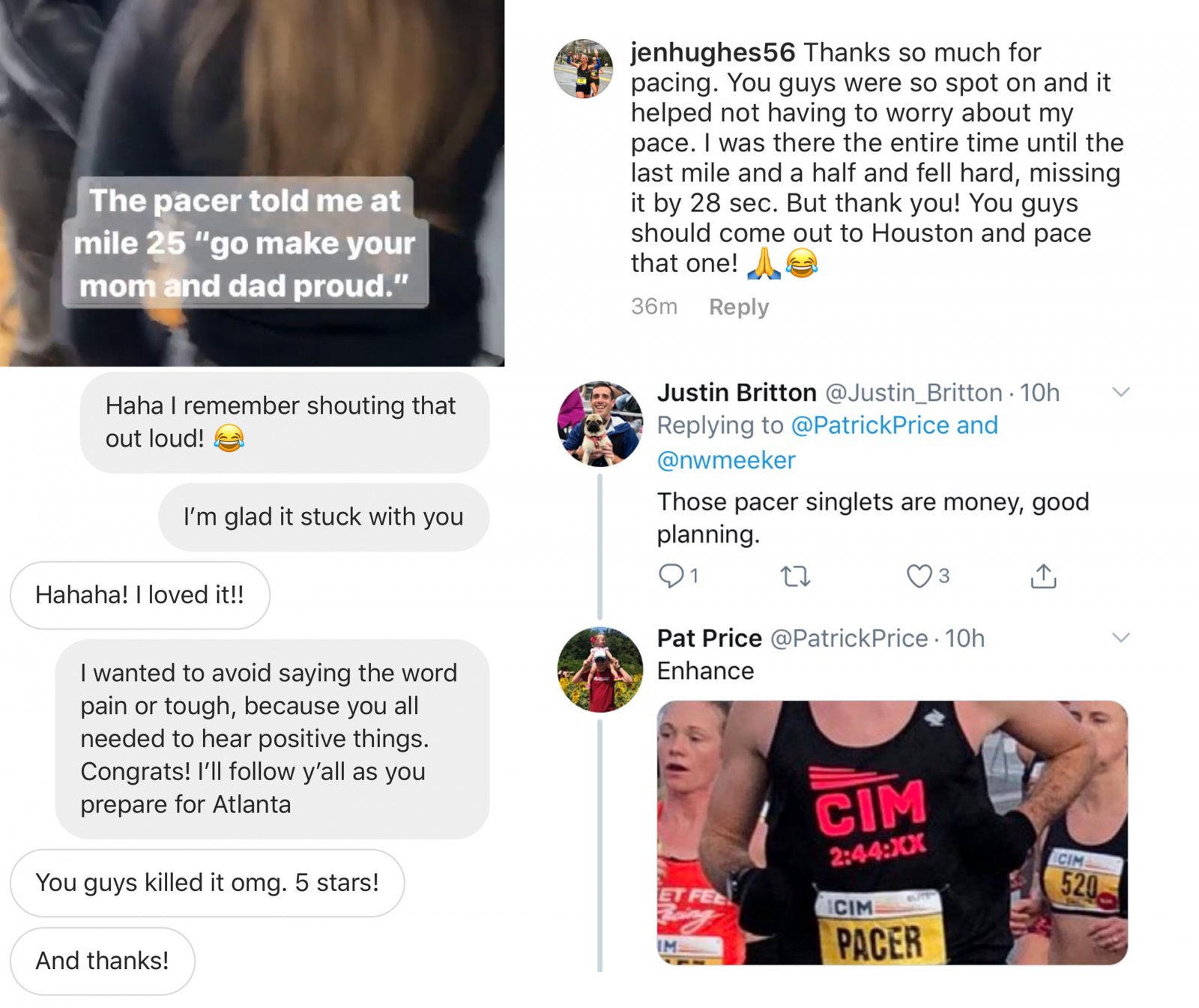 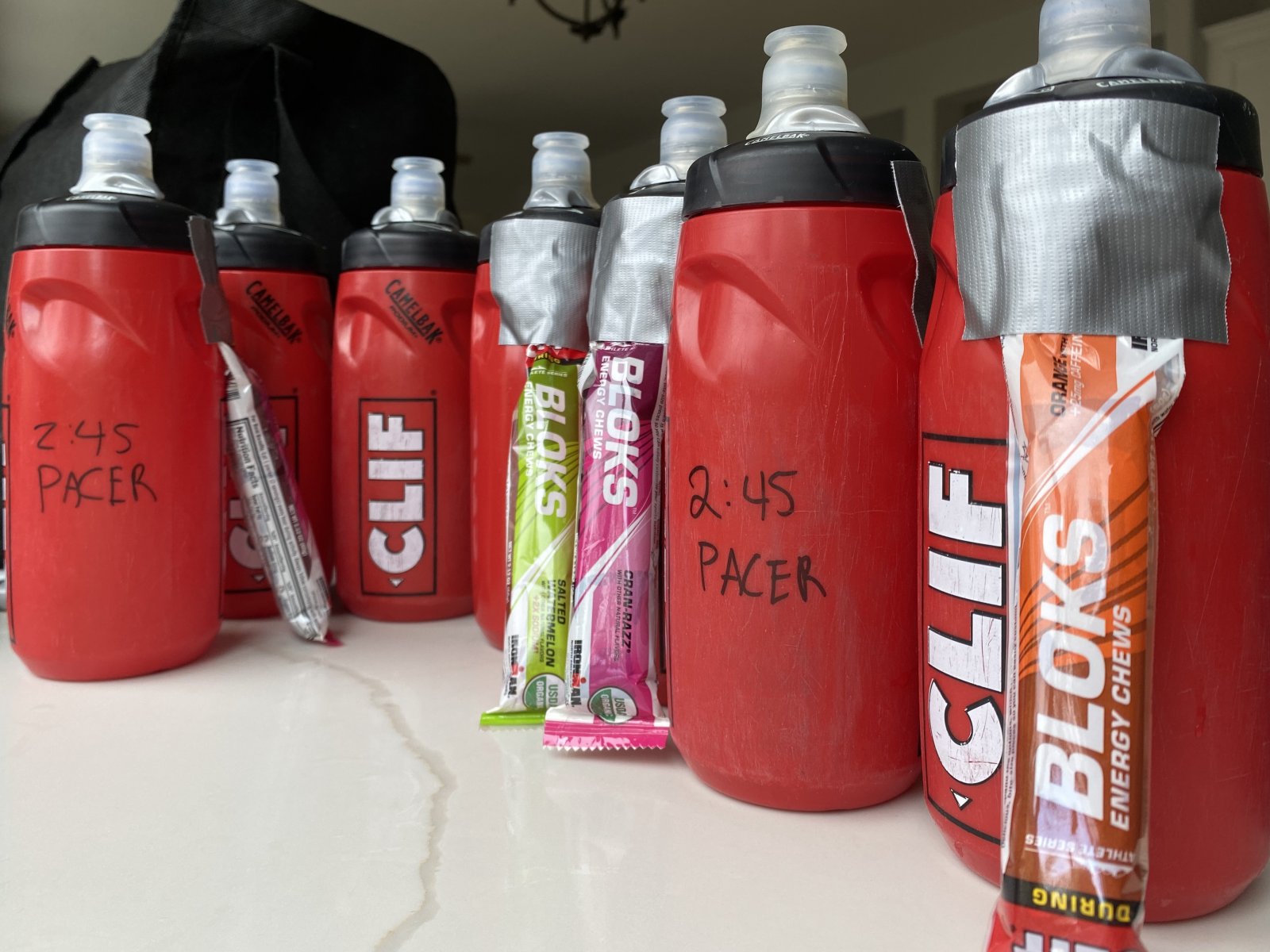 Watching the women finish instead of sprinting for the men's finish line. 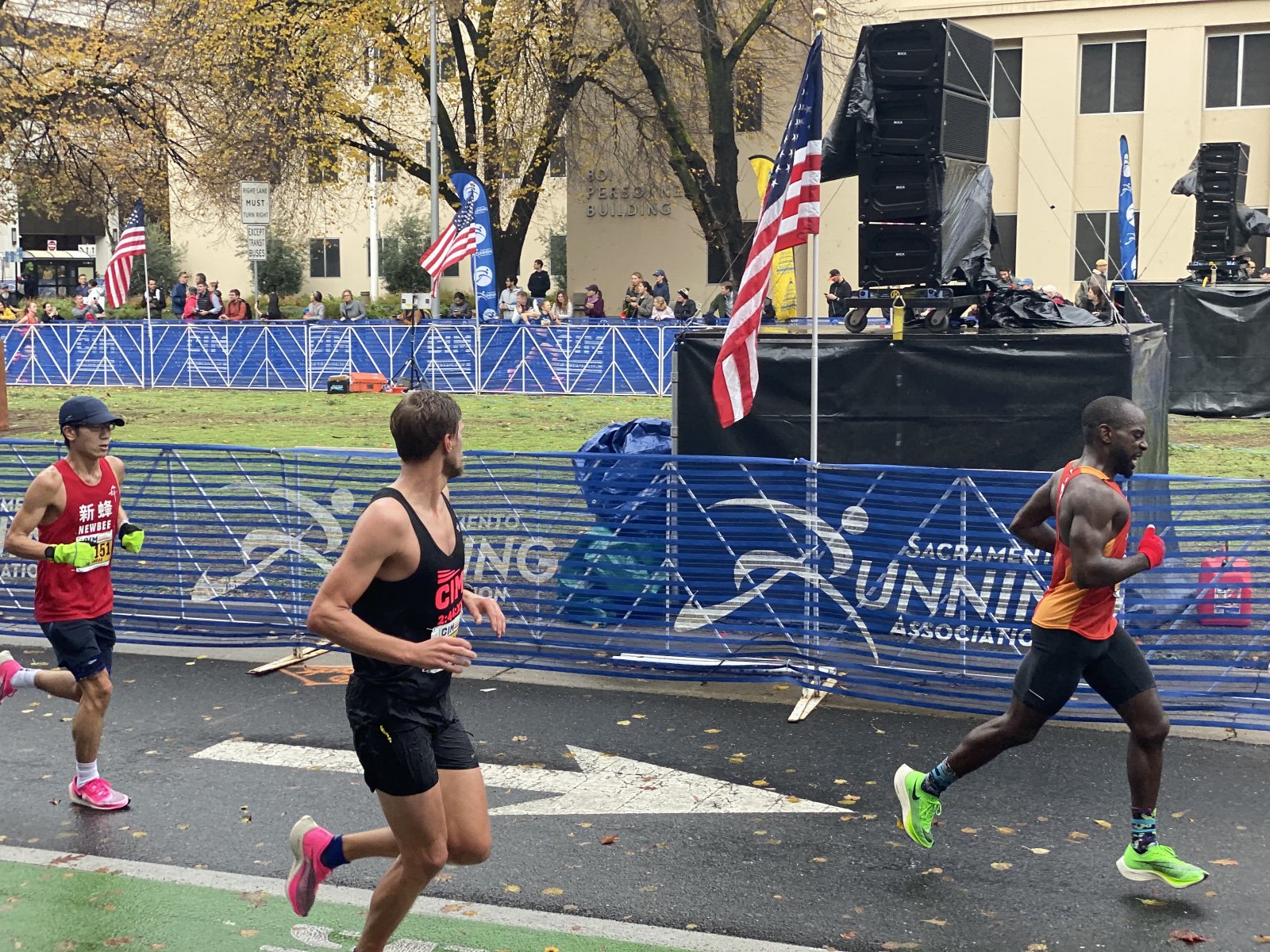 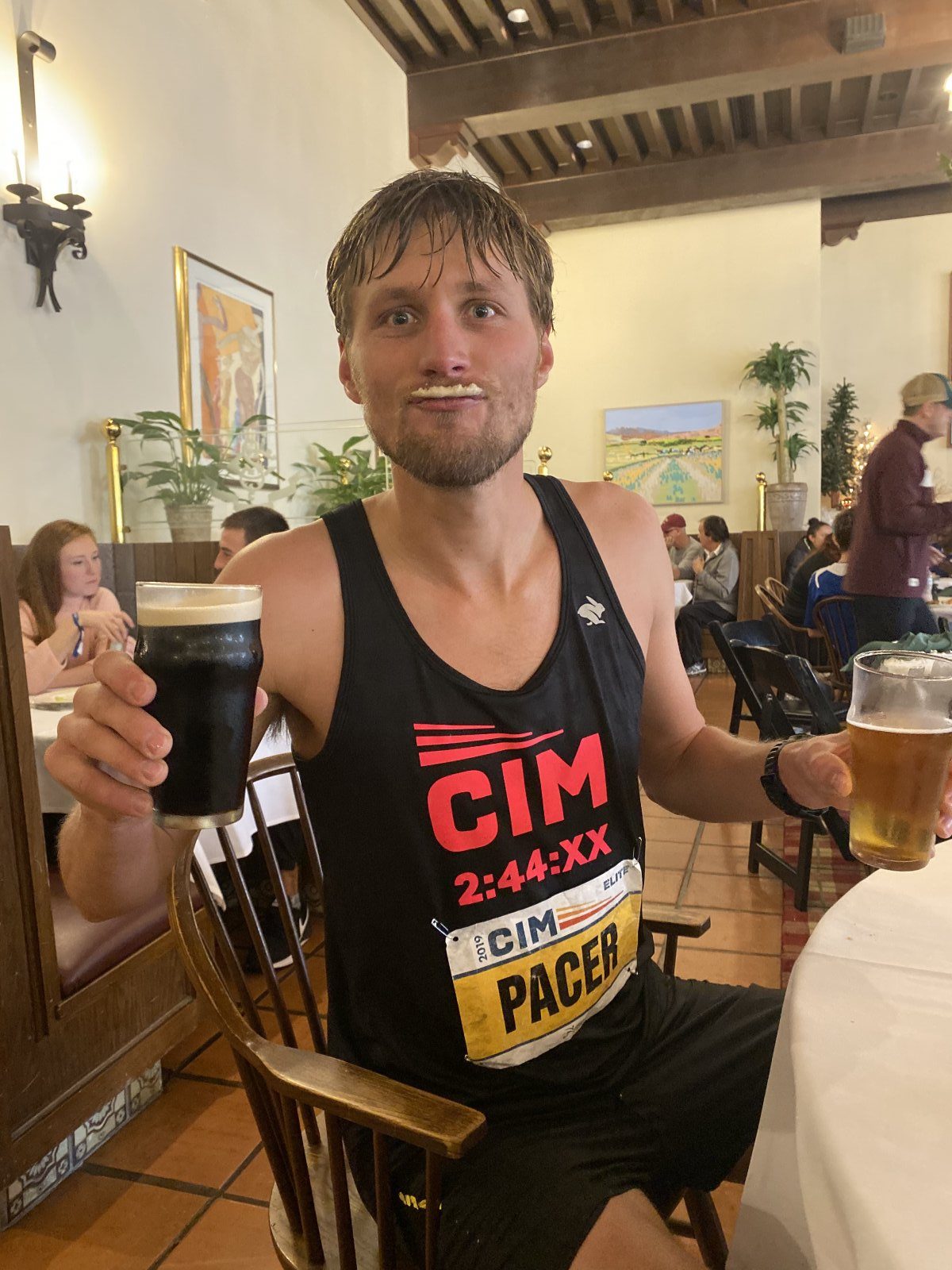 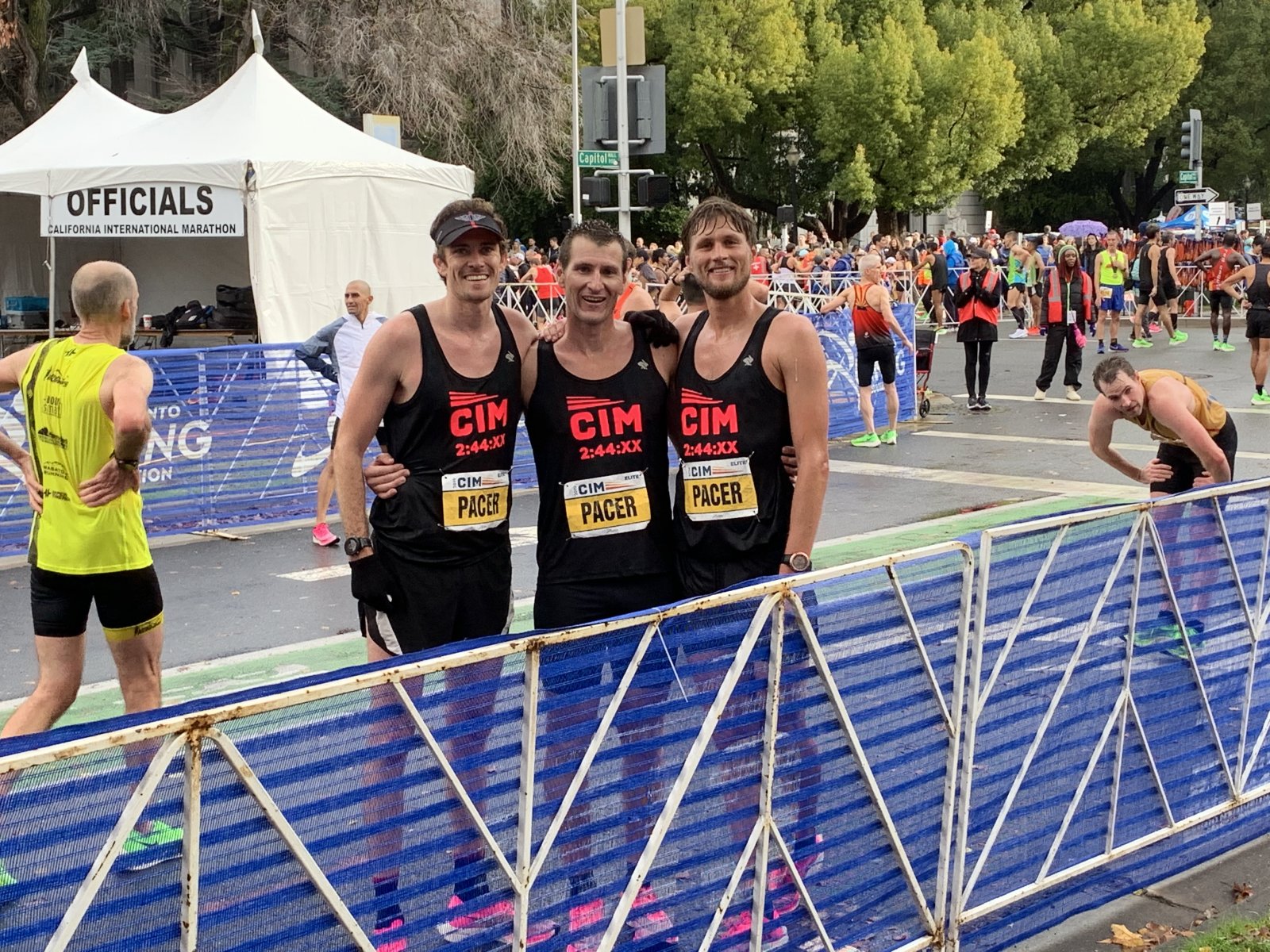 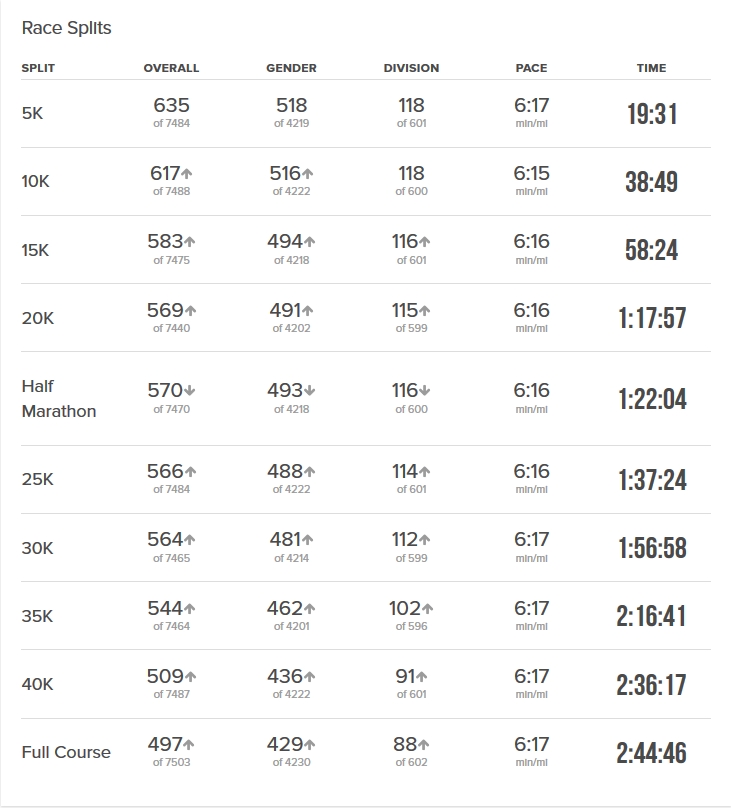