If you ride enough, you know what I mean when I say that every road and trail has its own unique character. But why is that? Reading about how I pedaled hard and fixed flats and pedaled hard again gets old pretty quick, as does writing about it. So in the spirit of educating all y’all in the finer points of my non-cycling life (Geology PhD student at UCSB), I present to you my race-report dissertation from my signature event: Geology and its Implications for Crazy Cycling Enthusiasts on a Fine Winter Day in San Luis Obispo County. 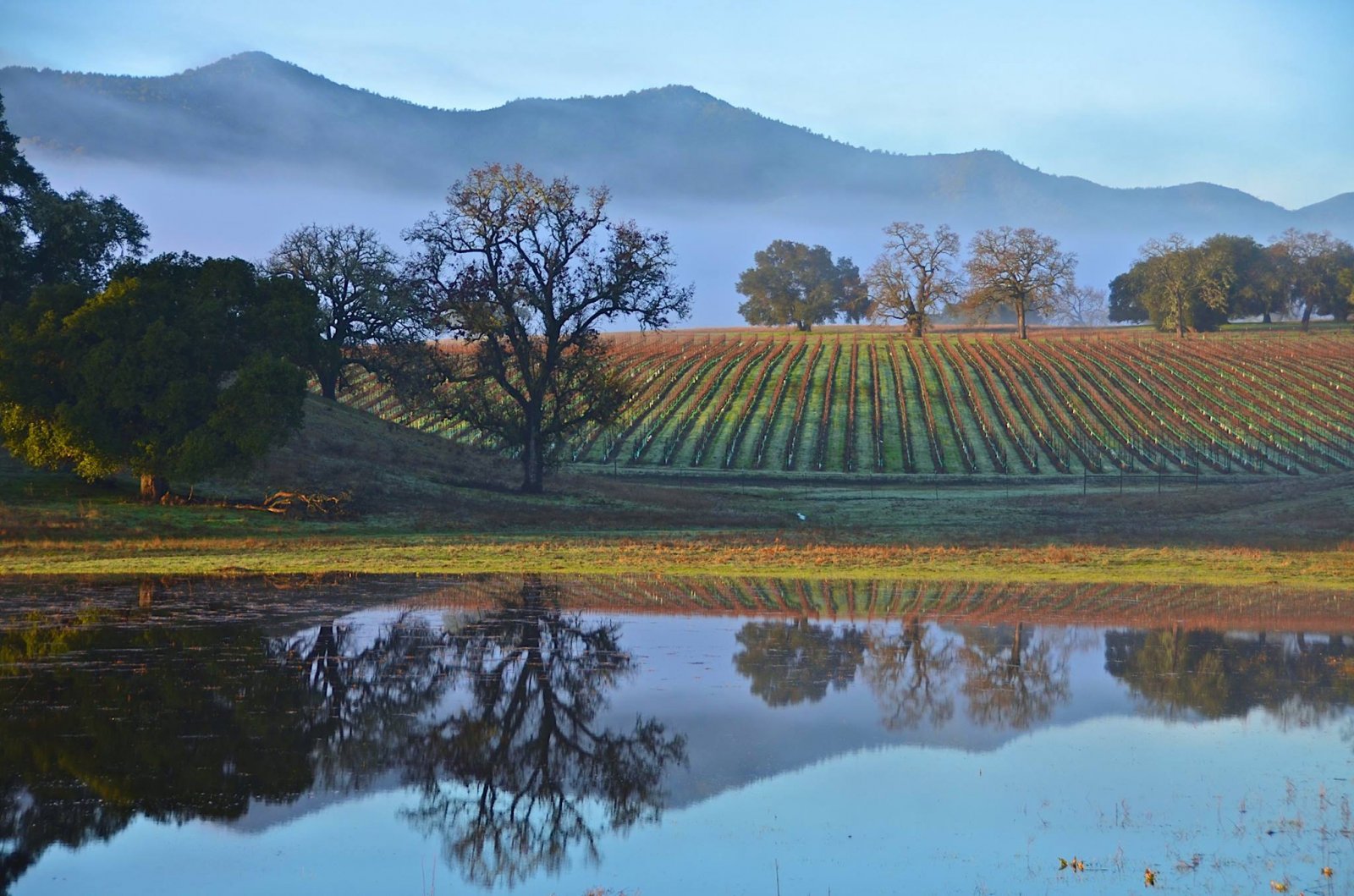 If the actual details of this route are what you after, click here for my pre-ride report. The same goes for details on my Niner RLT9 gravel grinder bike setup. Read on for a geologic tour of Menso's SLO Ride to Hell, interspersed with the narrative from the business end of one of the more spectacular bike events I've been involved with. Miles are referenced from the Strava file on the left of this page. If what you read sounds like way too much fun, register now for the next ride in the series, coming up on March 7th! 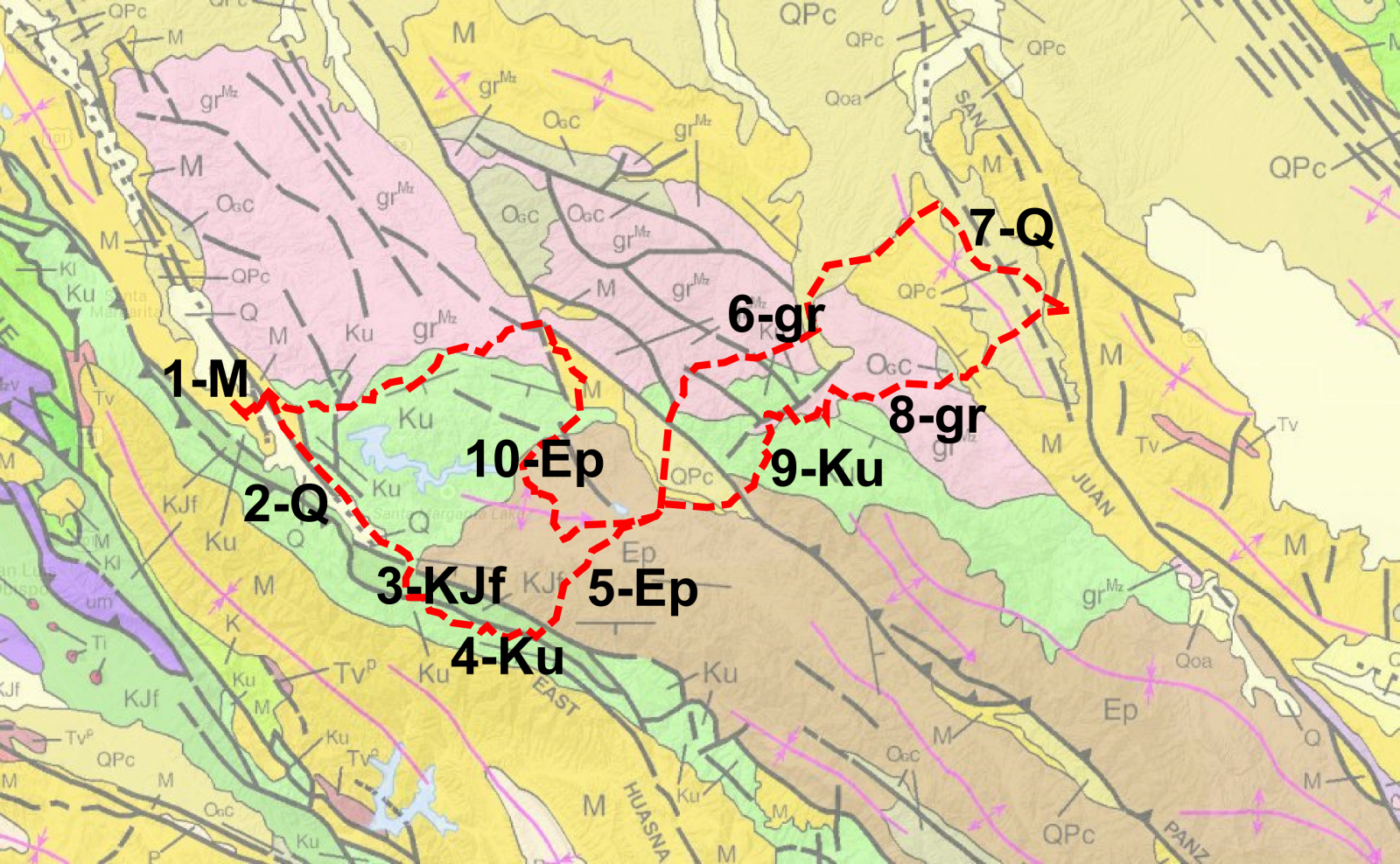 A more gorgeous day could not have been had than the bright and clear February morning that greeted the participants in my SLO Ride to Hell. It never ceases to amaze me how many fellow crazies there are out there, willing to drive a few hours and shell out a fair bit of coin to have an adventurous day planned for them, a day that most people think is fun only for masochists. So congratulations to all the hardy folks that came out and enjoyed a beautiful day in the hills with me.

The start at the Vineyard. Photo by Patrick Herlihy 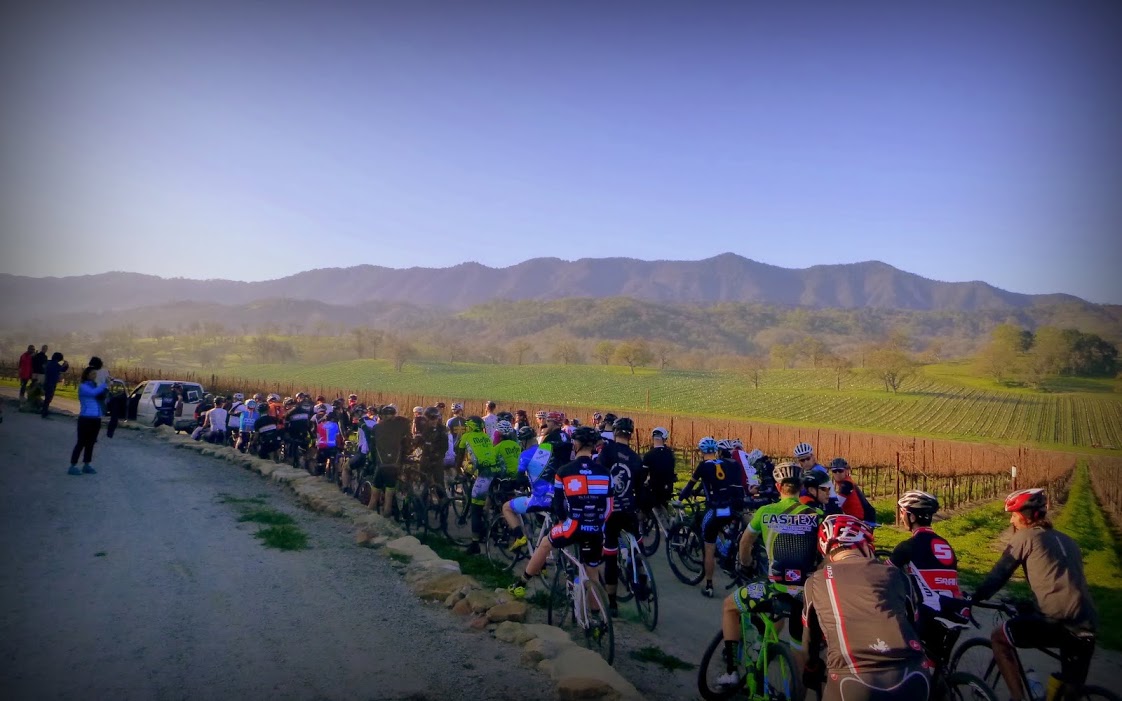 Our ride started in the vineyards of the Ancient Peaks Winery in Santa Margarita, CA. The rollout took us down a nice mile and a half of smooth chalky dirt, introducing our varied tire selections to the eroded remains of the geologic formations above and around us. I had some 35c Maxxis Mimo cross tires on, but slices from the Tainthammer ride meant that I had tubes inside instead of sealant, a reality that would haunt me later. At the moment though, the white gravel derived from the marine sedimentary rocks (1-M) crunched under my tires and all was good. Part of what makes Ancient Peaks Winery unique in SLO is that its property is home to the only large outcrops of calcareous marine shale in the wine region. The alkaline soil that develops from calcareous shale imparts unique characteristics to wine grapes, but I'm not sophisticated enough to tell you what those are. It also makes nice white road surfaces, like the famous Strade Bianchi in Italy.

After a brisk start through the flat valley, cruising on smooth asphalt sitting on quaternary river deposits (2-Q), Pozo Road turned upward at mile 7. Not wanting the bunch to hit the singletrack all together, I went to the front and put the hammer down, blowing my fun little ride to tiny pieces. Rinconada Trail snakes upward through some landslides covered in wildflower, becoming technical and rocky in the upper reaches as passes through an exemplary sliver of waxy green serpentine outcrops. These roads and trails were all originally constructed to access mines seeking mercury, chromium, molybdenum, and other heavier metals concentrated in the hydrothermally altered meta-basalt Franciscan rocks (3-Kjf). 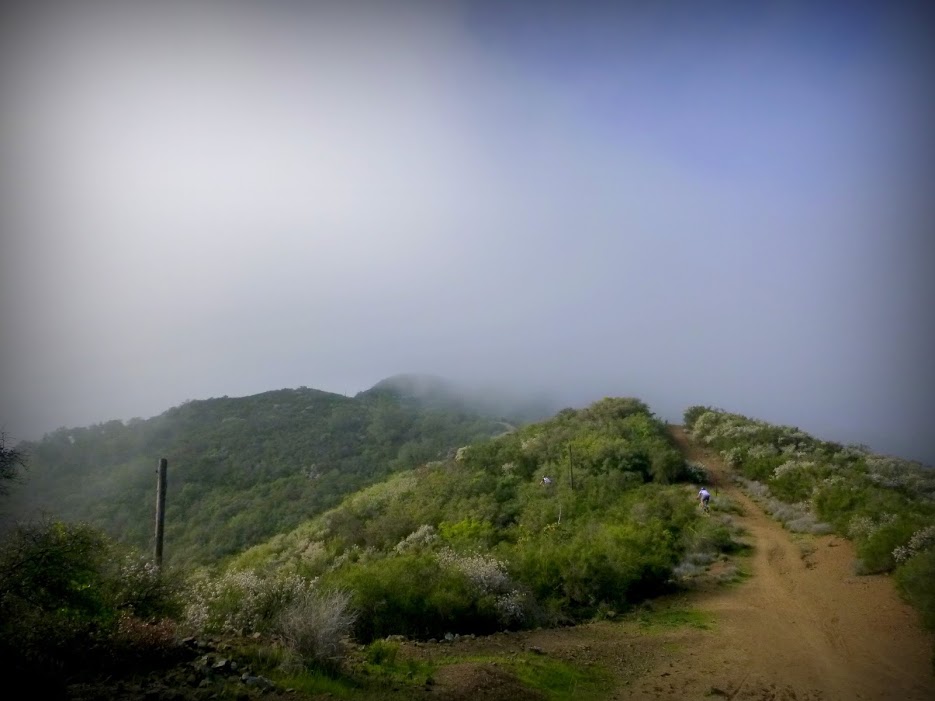 I crested Hi Mountain in a dense fog, a minute or three ahead of my fellow riders. I knew to be careful descending through the jagged shale (4-Ku) outcrops, but those thin-bedded, fine-grained little buggers got the better of me and pinched my rear tube. Some quick work and a CO2 kept the flax fix under five minutes, and only a dozen or so riders slipped by.

Team Clif Bar takes inventory of their skin and bones after the ride.

After a quick pit stop for more water and Shot Blocks, I made quick work of the gap between me and the leaders by powering up the lower half of Black Mountain Road at an absurd pace. Since I caught the front with five minutes to climb, I kept going and reduced the bunch to just Chris Jackson, Dan Findley, a local kid on a mountain bike, and me. We descended McGill Trail to Red Hill Road together, relishing the swoopy decomposing granite surface as a reward for our efforts. The granite (5-gr) in this region hardened from magma deep in the earth almost 200 million years ago, and was originally emplaced at the southern end of the Sierra Nevada mountains. 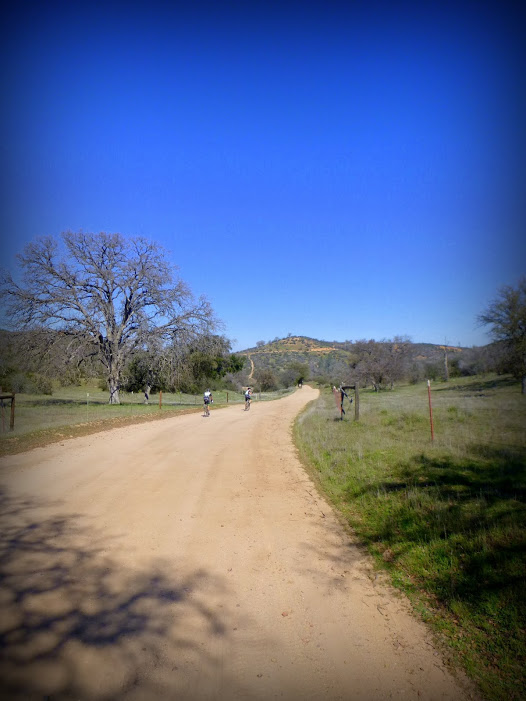 When the San Andreas Fault system formed a hundred million or so years later, it chopped off the southern bits of Nevadan granite and transported them west and north, which we now see in the sporadic Salinian Block granites present from the top of the Grapevine to the tip of the Point Reyes Peninsula. Unlike the shale, which was deposited in thin, evil, tire-slicing layers as sediments filtered down through the depths of shallow seas, the granite was emplaced as a more or less continuous blob of cooling magma. It rounds and weathers into nice coarse well-draining sand, instead of flaky tire killing shale or sticky clay-mineral mud like Franciscan Complex soils presents on Rinconada Trail (and Irish Hills, Santa Teresa Park, Red Hills Trails, Auburn, etc. etc.).

Unfortunately some elevation loss and a few crossed fault lines brought us back in more quaternary deposits derived from marine sedimentary tire (7-Q). Just as I was telling Chris that it was going to be him and me again, another slice was added to my super sad rear tire.

I rode a nice ITT across the lonely pavement between Red Hill Road and the Pozo turnoff several miles east, picking up some ducklings that I then abandoned at the second feed stop. The La Panza climb and descent are more nice granite (8-gr), and by the top of the long Pozo Grade I had ridden myself back into third place, with Chris five minutes up and Dan two or three. Usually the Pozo Grade descent is a ton of fun, but on this day, after chasing for hours, and with no spare tubes, I descended as gingerly as a bag of rocks with a sore back could. That we were back in shale (9-Ku) did not help. 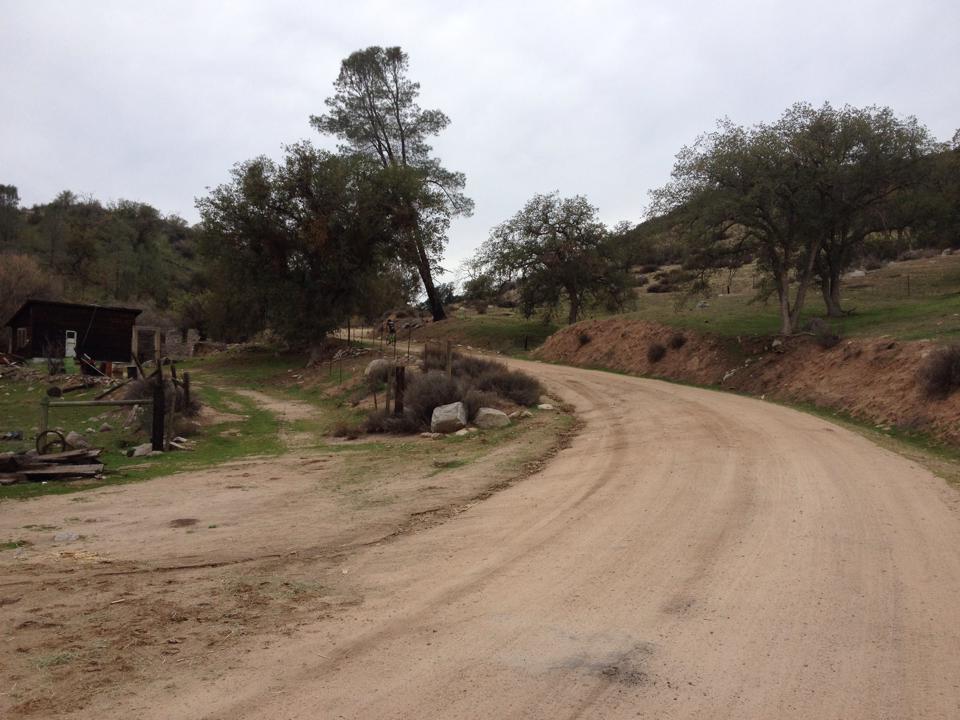 The only dirt left was the marine strade bianchi of River Road (10-Ep). I got caught before the pavement ended by Ronnie Toth and Art's Cyclery's Eric Benson, and we hauled some seriously butt, catching Dan on Parkhill. I put in a dig on the longest of the Parkhill bumps, and then it was just me and Ronnie, with Chris many minutes up the road and out of reach. I gave Ronnie the rundown on the rest of the course, and let him know that if he could hang on up the final two minute climb from the bridge on Las Pilitas then we were home free. He did, and jumped away over the top, and we cruised in a few dozen seconds apart. 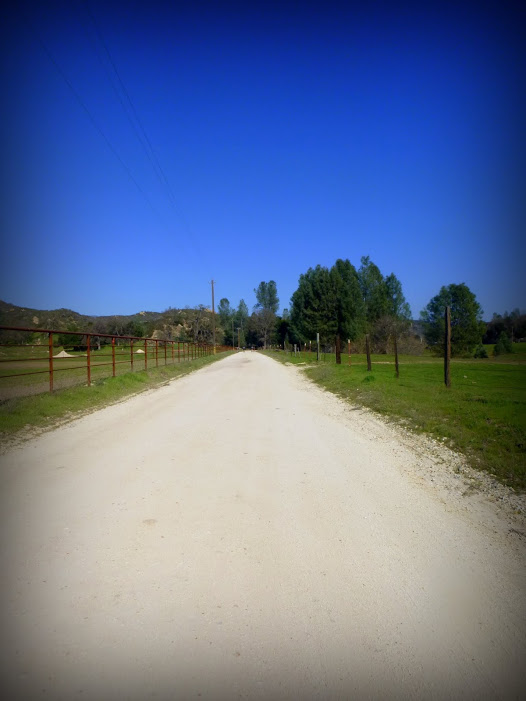 Like all good not-races should end, we all proceeded to chat, eat tacos, and drink delicious cold beer until the sun went down over the vines. Riders trickled in for a few hours in small groups, all content that the course served up the best the area has to offer. With all souls accounted for, and only two broken collar bones, one broken hand, a few square feet of road rash, and twenty six stitches in total as a result of Menso's SLO Ride to Hell, we wrapped things up and started thinking about next year. 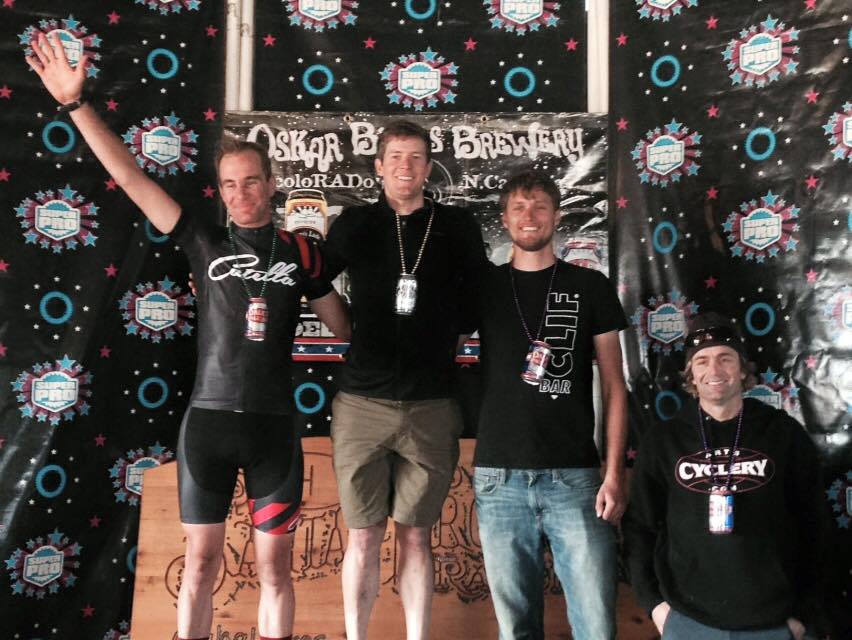