File this one under “things to do on the way to L.A.”. I’ve eyed the taller peaks in Los Padres for many years, but few people have documented their visits, so planning adventures has been difficult. On their own, these trips are not particularly noteworthy, but the scenic views and unavailability of good beta makes these worth sharing.

15-70 miles
Cerro Noroeste (8,283') is a sub-alpine peak in Los Padres National Forest, just west of Frazier Park at the top of the Grapevine. Unlike its sister peak Mt. Pinos (8,848'), which has a well-known mountain bike trail and winter snow play area with marked and patrolled Nordic ski trails, Cerro Noroeste is much less often visited and thus it was difficult for me to find previous tales of adventure when I was looking into these routes. I had hoped to cross country ski in the Cerro Noroeste/Mt. Pinos area for a number of years, so I was delighted when the drought conditions briefly lifted in late January 2017 and I was able to ski to the summit. Once the snow melted and the road was cleared, I spent an early morning exploring a canyon below the peak. I couldn't find any info about biking up Quatal Canyon Road so I just went for it and got lucky, finding great views and just enough water stops to not die of dehydration.


The gate to Cerro Noroeste (formerly called Mt. Abel) is closed in the winter, generally from November until late April, and this was certainly the case in January 2017. A cold overnight storm with a snowline below 4000' was forecast, with a clear day to follow, so I set my alarm for early-o'clock to beat the Los Angeles snow play crowds heading to trash Mt. Pinos. There are two ways to get to Cerro Noroeste from Santa Barbara: the longer but faster route through Ventura to I5 and then up the Grapevine, and up winding State Highway 33 from Ojai. This storm was cold enough that Caltrans closed 33 to prevent idiot SoCal drivers from dying, so I went the boring way. I had to chain up just a few miles off the top of the Grapevine, then drove through the ephemeral winter wonderland past Pinos and Pine Mountain Club to the gated bottom of Cerro Noroeste Road, just up the hill from the Apache Summit fire station. 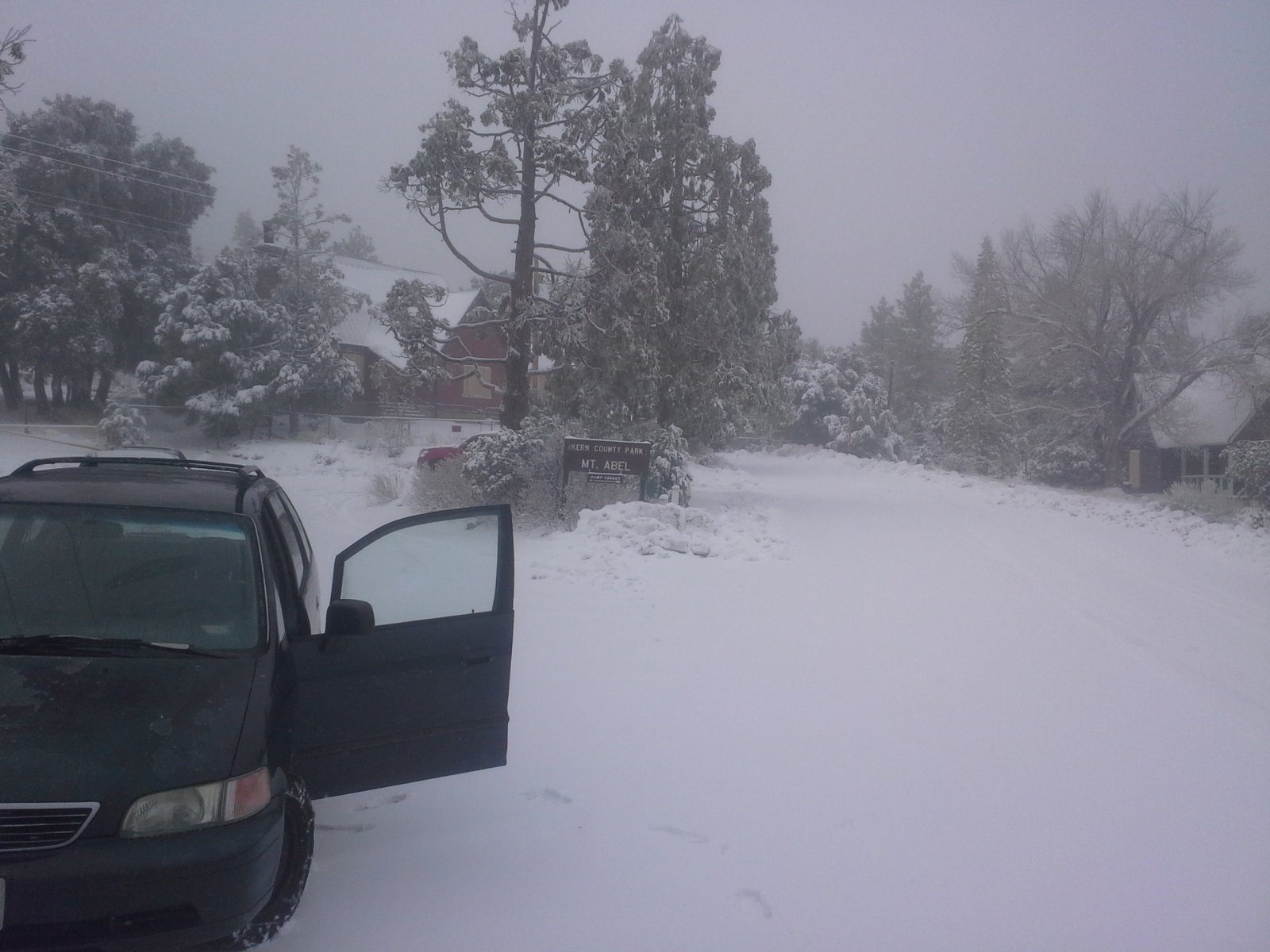 I had found one account from a group that biked part way up in February 2005 and then backcountry skied the rest, so I was prepared to walk up until there was adequate snow, but it turned out that I picked the right winter storm forecast and was able to click in to my BCN XC skis right at the gate. There were maybe four inches of snow on the road at that elevation, which was plenty in the morning and juuust enough to not scrape the pavement on my return as it thinned out during the day. 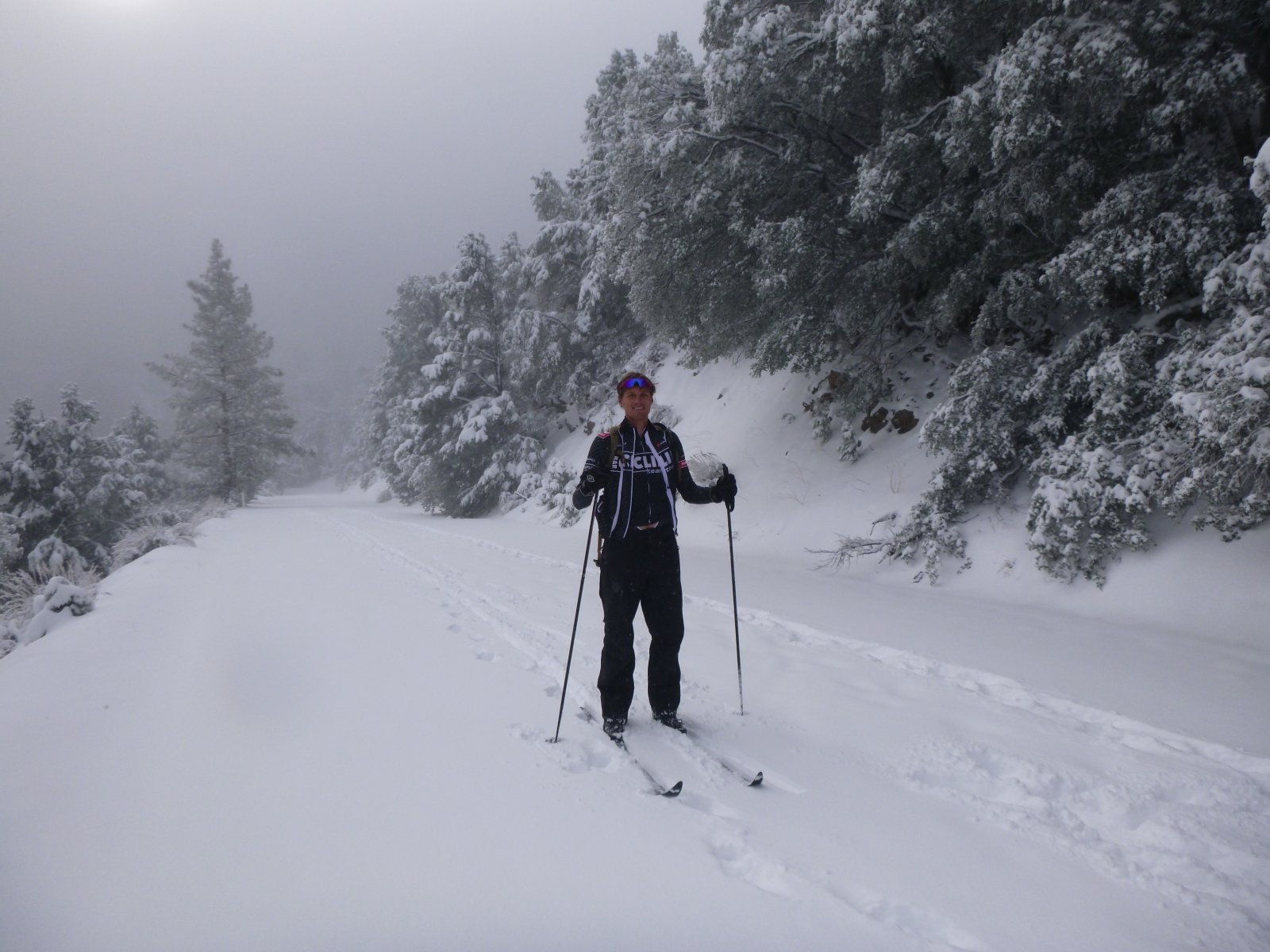 I bothered a couple walking their dog on the lower slopes for a photo, and then trudged up towards the summit. Seven miles at a 5% grade covered in soft untracked snow prevented any gliding, so it was basically a four hour walk. Thankfully, the morning blizzard cleared and I was rewarded with sparkling views of the snow covered Chumash Wilderness. 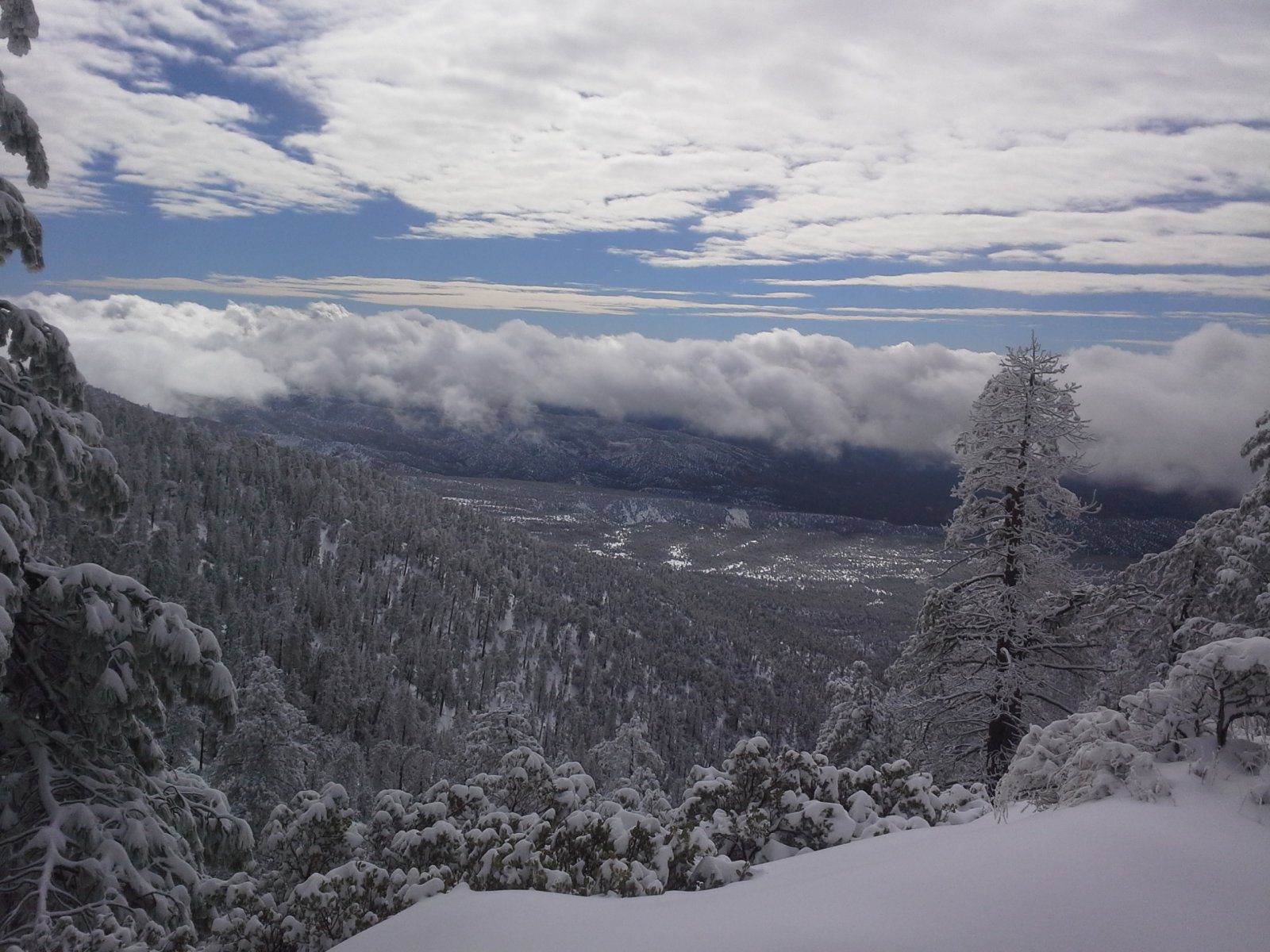 My original plan was to follow the Tumamait Trail route east from Cerro Noroeste to Mt. Pinos, but the view looking down into the saddle past Sawmill Mountain lead me to reconsider. Even though my BCN skis have metal edges, they are only 68mm at the widest and are terrifying to descend on down anything harder than a groomed blue run at resorts, and the route down looked to be a solid black diamond, obviously with no grooming. 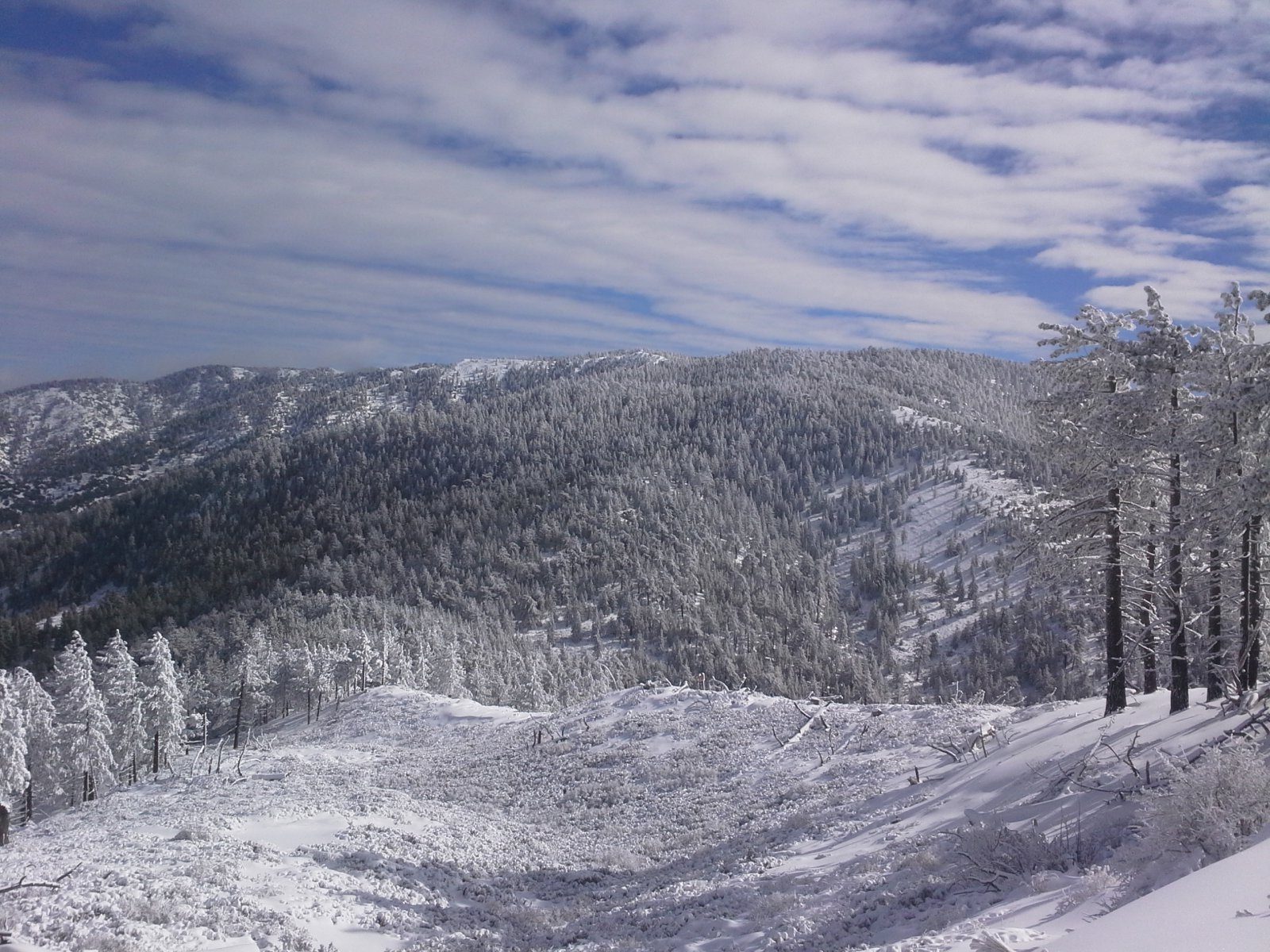 Happy with my rare display of good judgment, I stomped up the steep final half mile to Campo Alto and took in the bedecked pines and crisp untouched whiteness. The descent was much easier than the nearly four hour ascent; by staying in the track I had set on the way up, I was able to push and glide all the way back to my car in half the time. 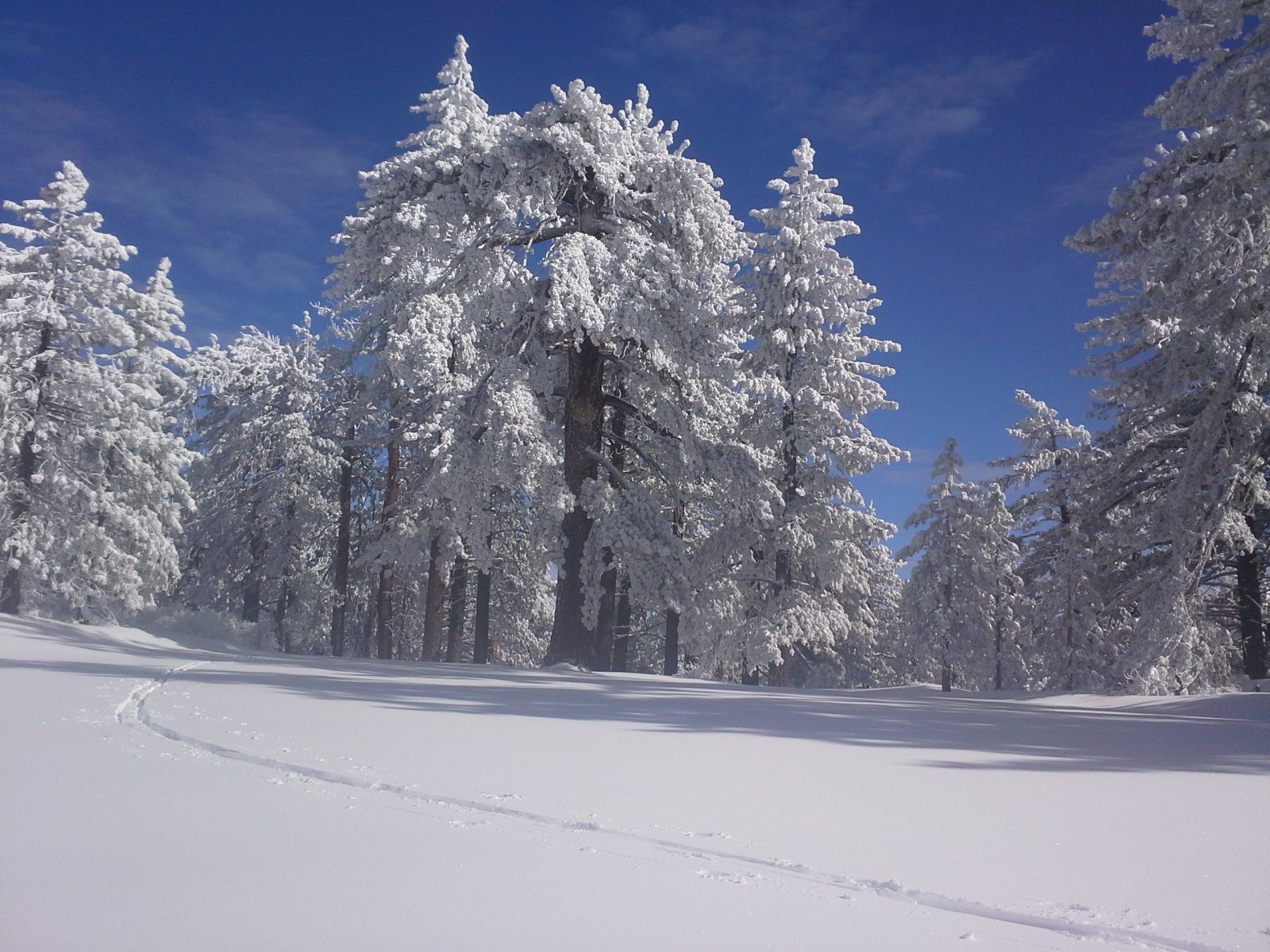 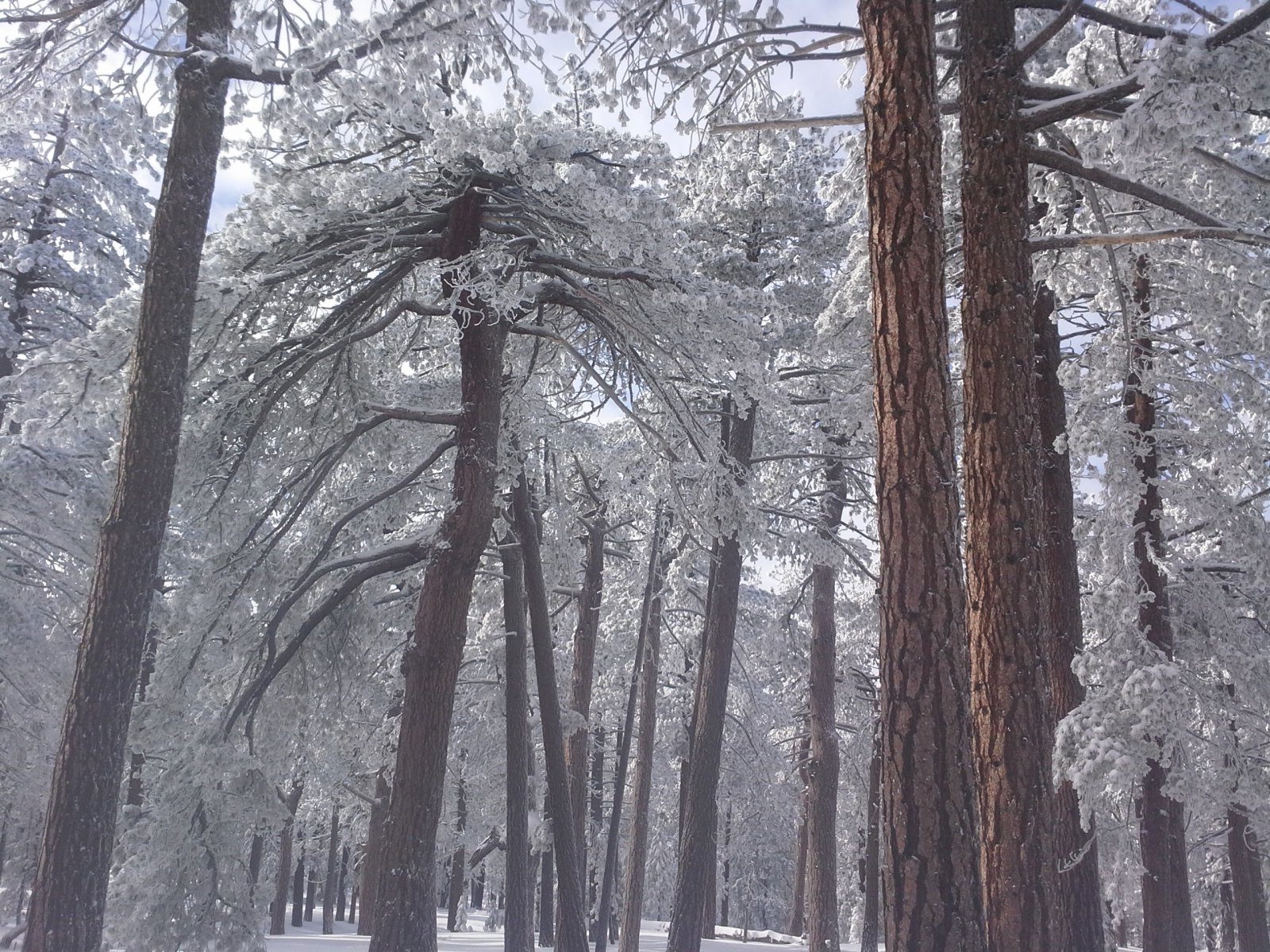 
Once the snow melted, I turned my attention lower down the slopes of Cerro Noroeste to Quatal Wash. I had noticed a long straight Forest Service road on the map shortcutting from Highway 33 up to just below Apache Saddle, but I searched extensively and found not a single record of anyone biking up it. No Strava segment existed, no blog posts, just a pleasant descriptive piece by someone who drove it, and some 4x4 guides to the OHV trails in the area. My output is less than half a horsepower, compared to the 200+HP under the hood of a Jeep, so parsing how a route will be from pedal-pusher and throttle-twister stories is always an interesting game. 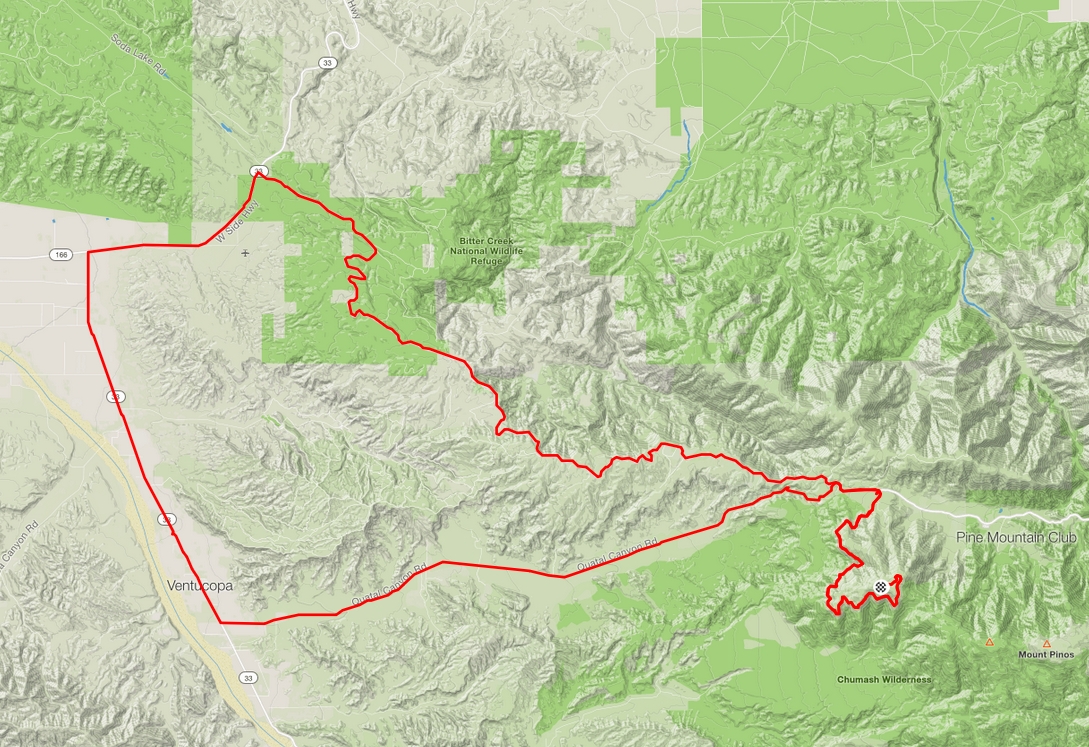 So it was that I visited again in late June and set out at 6am from Campo Alto campground at the Cerro Alto summit, with no knowledge beyond what I could gain from map-gazing, loaded with three bottles and a handful of Clif Bars. The descent from the summit to the saddle, and then onward down Hudson Ranch Rd to Highway 166 was stunning at dawn, as was the experience of descending from the sub-alpine pine forest, through pinyons and juniper, into manzanita and oak grassland, and down to the final biome: the harsh semi-arid desert environment straddling the San Andreas Fault southeast of the Carrizo Plain National Monument. There I turned left onto 166. Discounting those four miles of highway, I saw a single-digit number of cars on the entire ride. 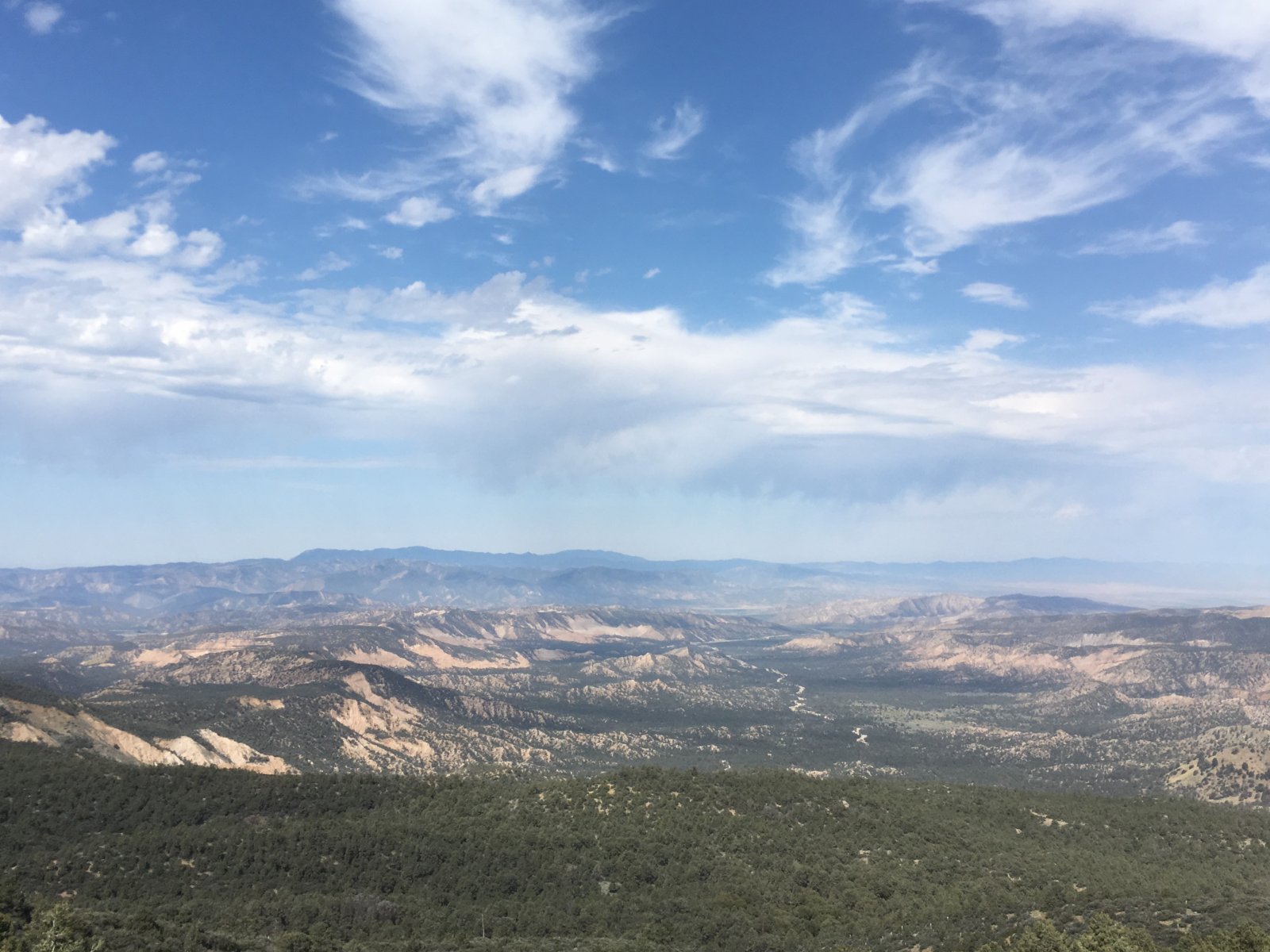 It was already heating up when I turned left again onto Hwy 33, following the sign for Ojai, and it was unpleasantly toasty inside the convenient roadside farm-work portapotty I poached for some morning weight loss. Less than two hours had passed but I was forty mostly-downhill miles in when I realized that three bottles were not enough for my route. I was grateful to find that the Santa Barbara Pistachio Company ranch maintains a nicely stocked general store in the valley, with a shaded rest area and water spigots that I was able to refill from. If you are passing through on Hwy 33 instead of I5, I think it would be a good spot (mile 40 on my ride) to park and start the ride. 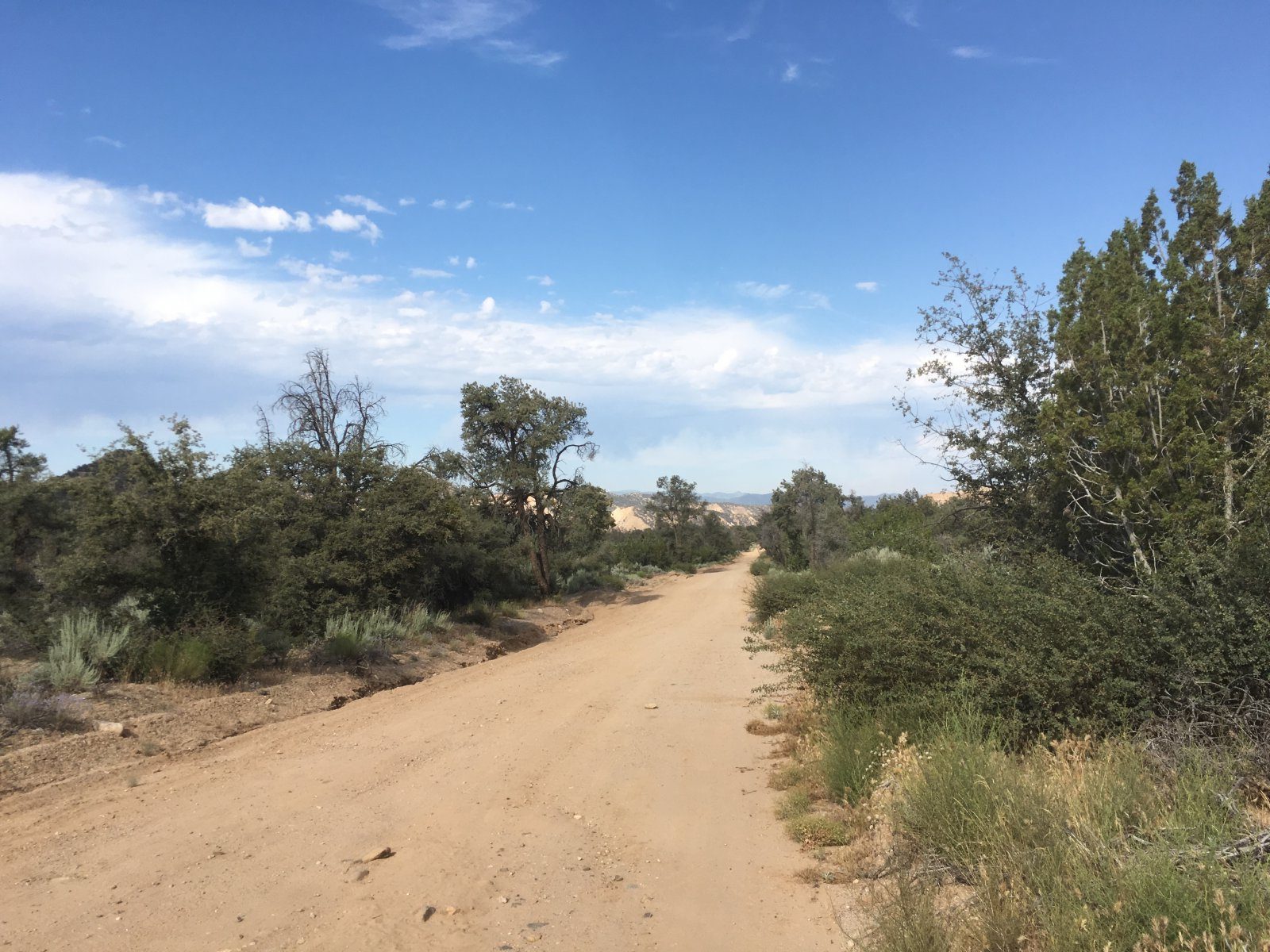 A few miles south on Hwy 33, I made a (well-signed) left onto Quatal Canyon Rd, Forest Service Route 9N09, and started back towards camp, happily crunching dirt under the 40c tires on my RLT9. The road seemed have been very recently resurfaced, and the first four miles had been wetted by a water truck that very morning, probably because there is a gravel mining operation at the National Forest boundary. The pavement portion was 43 miles, and the return leg only 23, so I was a bit worried that the climb was going to be too steep for the 34/32 low gear on my adventure bike, but the two thousand feet of rolling climbing on outbound pavement was deceptive, giving the impression that I had descended far more than 6000' net elevation difference. Quatal Canyon Road was a pleasant though remarkably straight affair, steadily climbing at 4-5% for 11 miles before kicking up a bit for the last three miles. In the condition I found it in, I would have been totally fine on my road bike with 25c tires, but I imagine the surface takes a beating from OHV traffic and turns to deeper and rockier loose dirt later in the summer. Any 2WD car with reasonable clearance could also make it no problem in either direction, at least as it was that day. 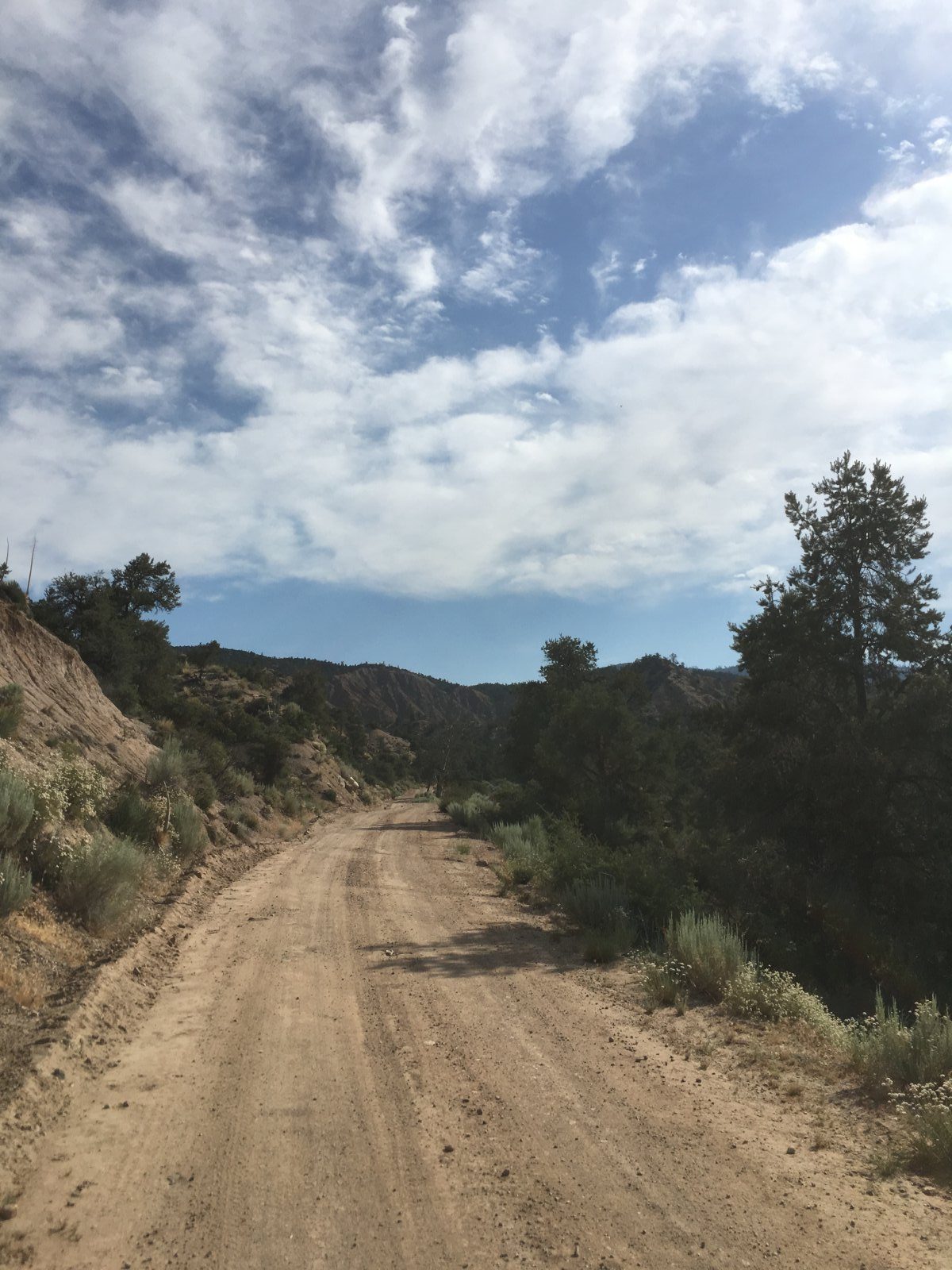 I kept a fairly steady effort going, but took time to admire the strange landscape around the wash. Quatal Canyon is one of those classic Western movie erosional landscapes, flanked by steep gullies scoured of most vegetation. Higher up, as the road deviated from its straight course into a few gentle switchbacks climbing to Apache Saddle, the low scrub gave way to pines and cooler temperatures. 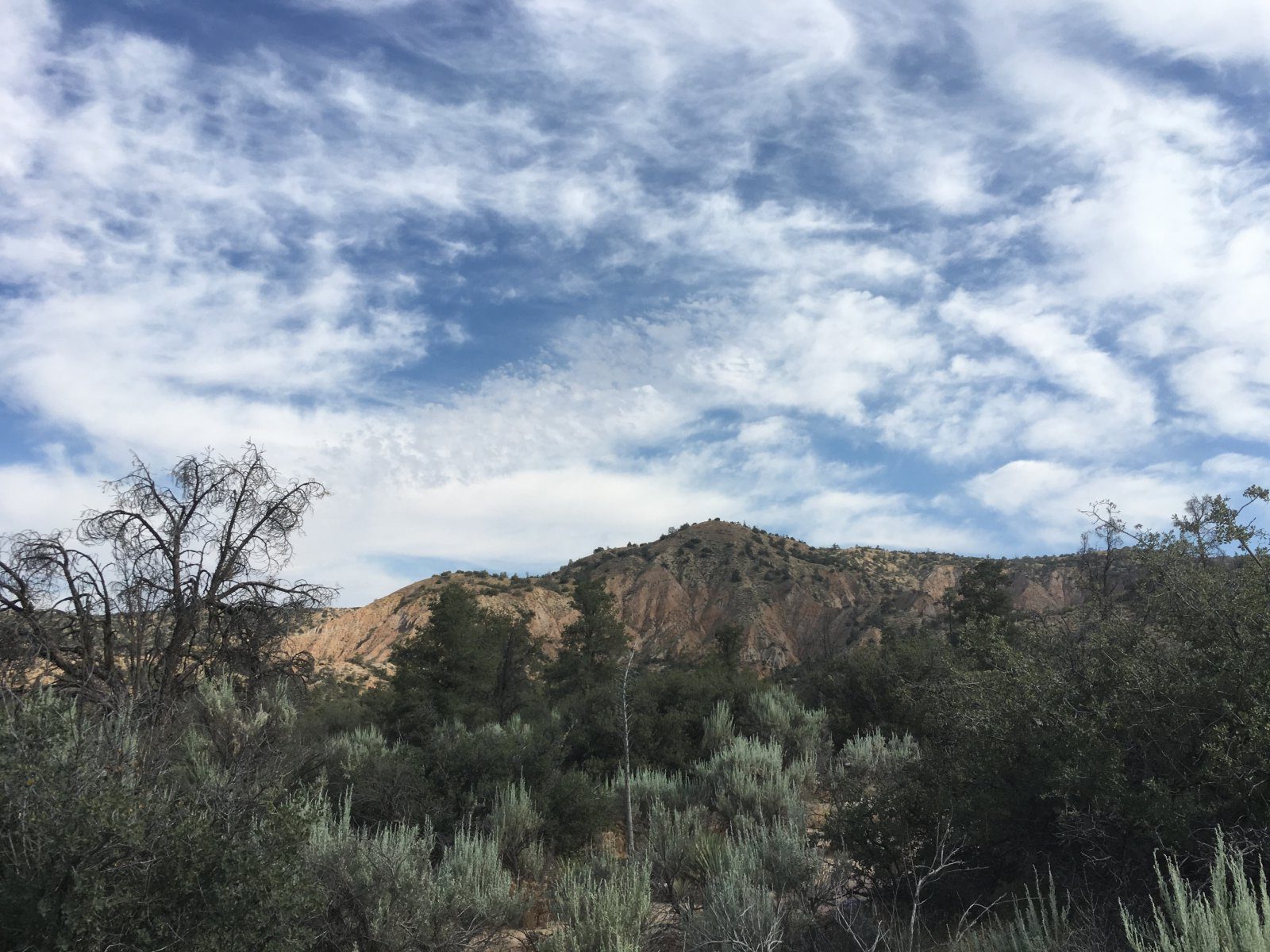 Even though I had one full bottle still, I was overheating and parched in the dry air, so I stopped at the Apache Saddle fire station for a water refill from the friendly fire fighters. Don't plan on getting water there though, since the only potable spigot is inside the station and they just happened to be outside maintaining equipment when I stopped by before spinning on to my campsite in the thin air atop Cerro Noroeste. 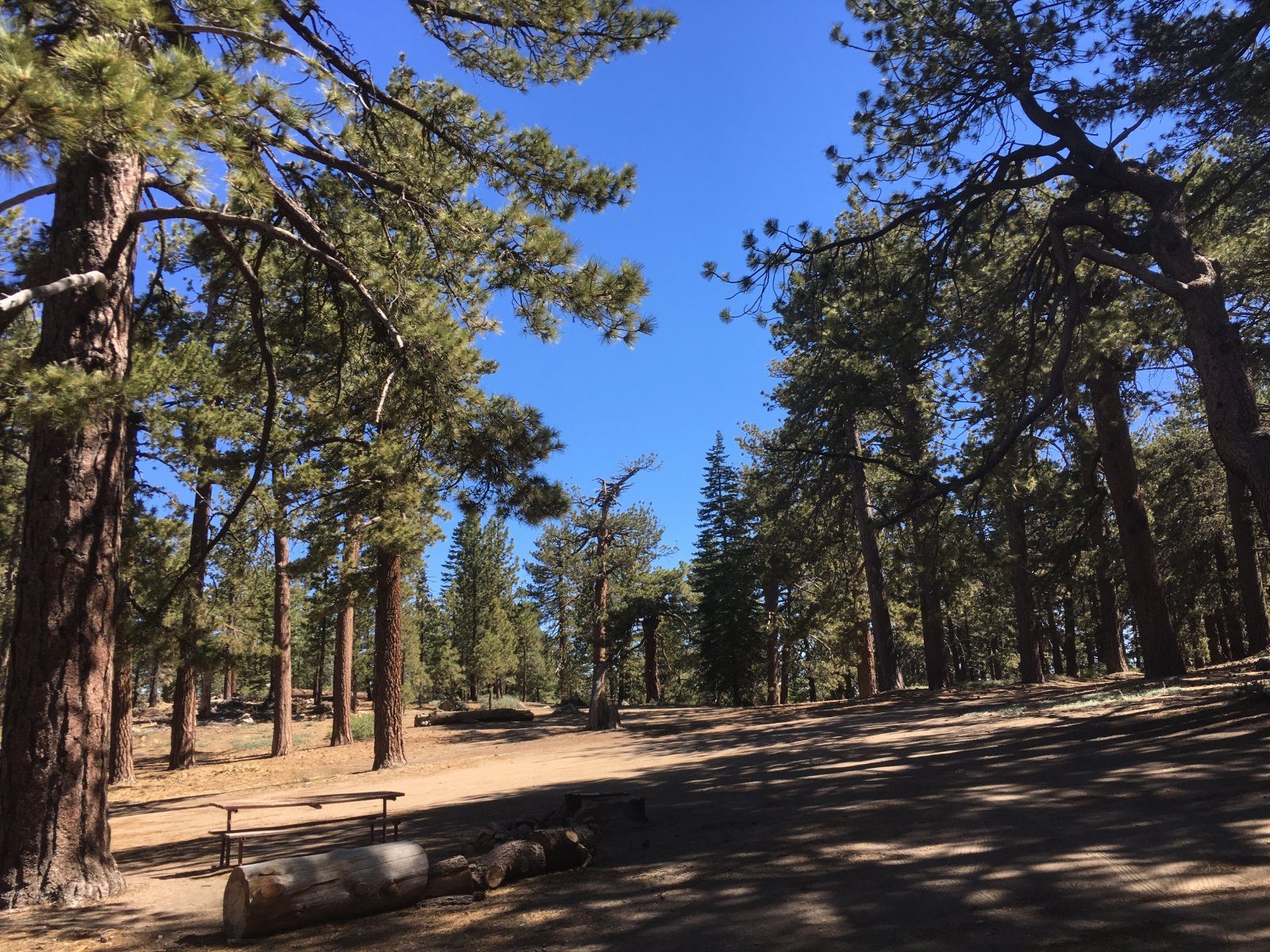