Some days check all the boxes for a story worth telling. Most don’t. I spend many a day biking, hiking, or running, and inhale a couple thousand calories during and after. Most of us strange endurance athlete-types do that pretty often, and I usually don’t really care to read or write about it. Summiting McKinley Mountain in Los Padres National Forest is one experience I would like share.

Several months have passed since my last adventure post, which a few thousand of you took the time to read and share. It's not that I haven't been outside- just last weekend I enjoyed an all day mountain bike ride for a buddy's birthday, with five digit climbing facilitating a tour of all the trails in and around town. I've also been training hard for two months already, hoping to improve on my 10th place finish at 2015 XC mountain bike nationals, laying down more four hour rides and 15-20 hour weeks than the waffles that fuel me. The numbers may be impressive, but none of it is really worth sharing in any detail. I pedaled, I ate, I biked some more, and somewhere around it all I taught myself to play an ocarina and made a ton of progress towards becoming the Esteemed Dr. Menso, Doctor of Rocks. Most all of my rides are unremarkable, save for the steady accumulation of big miles, but a crazy December slog to a rarely visited peak in the middle of Los Padres National Forest was wild enough to warrant story time on Most Excellent Adventures. Which got me thinking... what is it that differentiates a huge yet unremarkable day from a big enough day that should be shared?

Not the night before, not the morning of. A few days prior, at least, with several maps referenced, and maybe some incomplete reports from other attempts.

I was pretty cracked at the end of my fifth Giro di SLO, and so was Blake, having just completed his first annual mountain bike tour of San Luis Obispo. I figured this was the perfect time to invite him on another all day ride. I have been eyeing the higher peaks In Los Padres NF east of the mostly paved standard Figuero Mountain loop ever since I got snaked into riding Big Pine Mountain, and finals week gifted me a free day to go explore. McKinley Mountain (Not Denali!) stands tall at 6,182', and is accessed by a nine mile fireroad spur behind Figuero, perfect for cyclocross bikes, or so I thought. 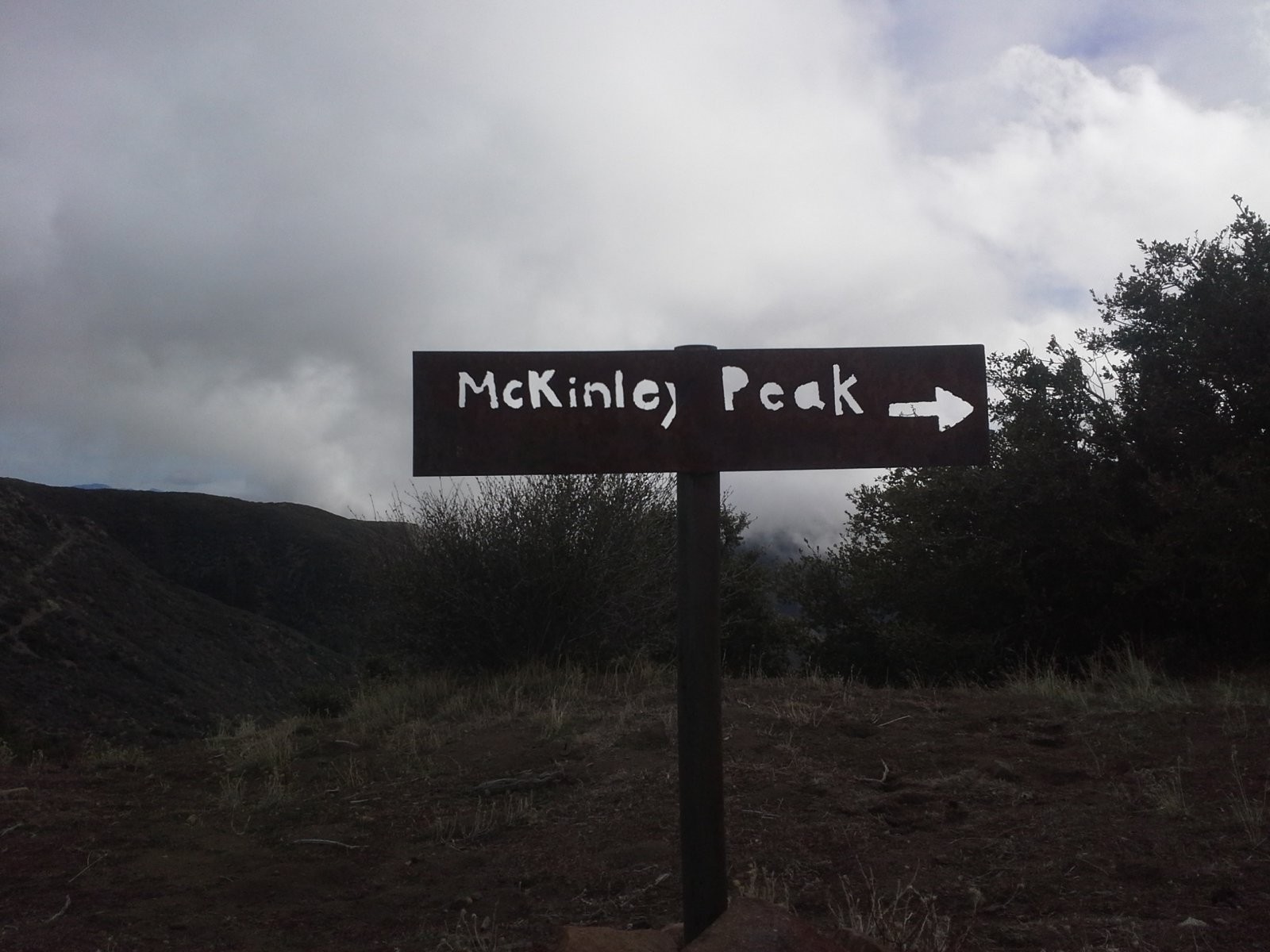 You've often noticed that overgrown deviation from the standard loop, but never had the time and surplus pocket calories on hand. Today, that isn't the case.

Three of us turned right through gate for Forest Service route 8N08, and quickly separated, content to each conquer the nine mile climb at our own pace. Jason was a late add to the roster, and, somehow unaware of the company for this ride, had done some hillwork the day before. I had the crazy idea to call this a day a real workout, so I set off alone, with Blake happy to enjoy at his leisure the spectacularly varied climb on loose rocks and sandstone boulders, through chaparall, and in and out of ancient pine forests. Two miles up, the impressive rock formations known as Hell's Half Acre signaled the beginning of some steep and loose spots, perhaps clean-able on a mountain bike, but not on my RLT9, even with 46c tires jammed in there. 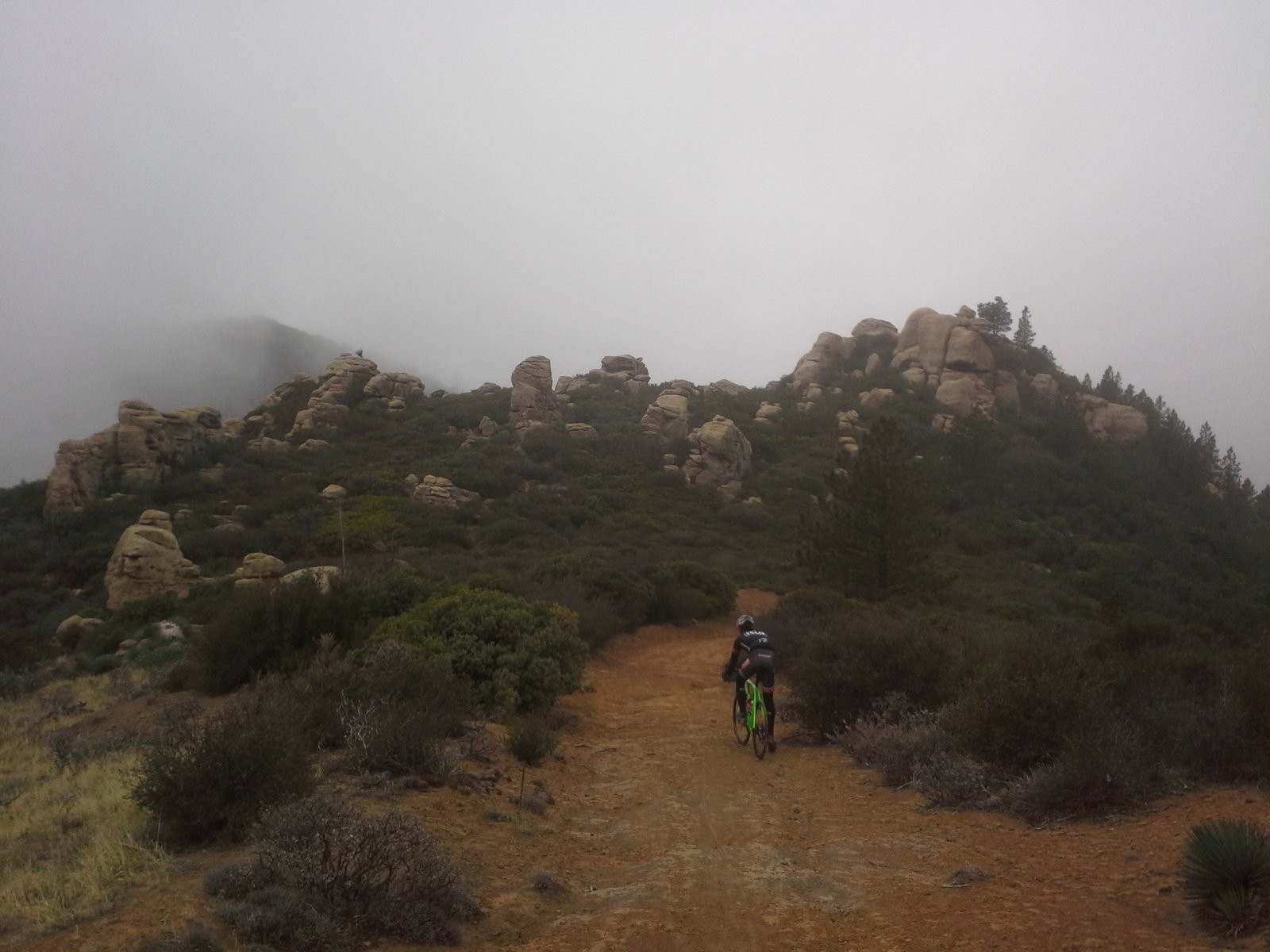 Don't forget a guitar... this far off the map, knowing the answer to Dueling Banjos is a valuable skill.

I had just finished signing the summit registry when Blake arrived, having noted my abandoned bicycle and followed the 3/4 mile firebreak hike to the true peak. We discussed the slender young man we saw a mile or two from the top. He had greeted each of us politely, but we both noted that when we had first appeared through the mist his right hand moved to hover over the trigger of the black AR rifle closely held to his chest, ammo clip in place. I spend a lot of time in the National Forests and regularly see guys in camo with hunting rifles, but this dude in standard REI apparel seemed to have simply gone out for a hike and decided an assault rifle was necessary to protect him. Fittingly, the pencil in the baggy at the summit was affixed to a rifle shell. 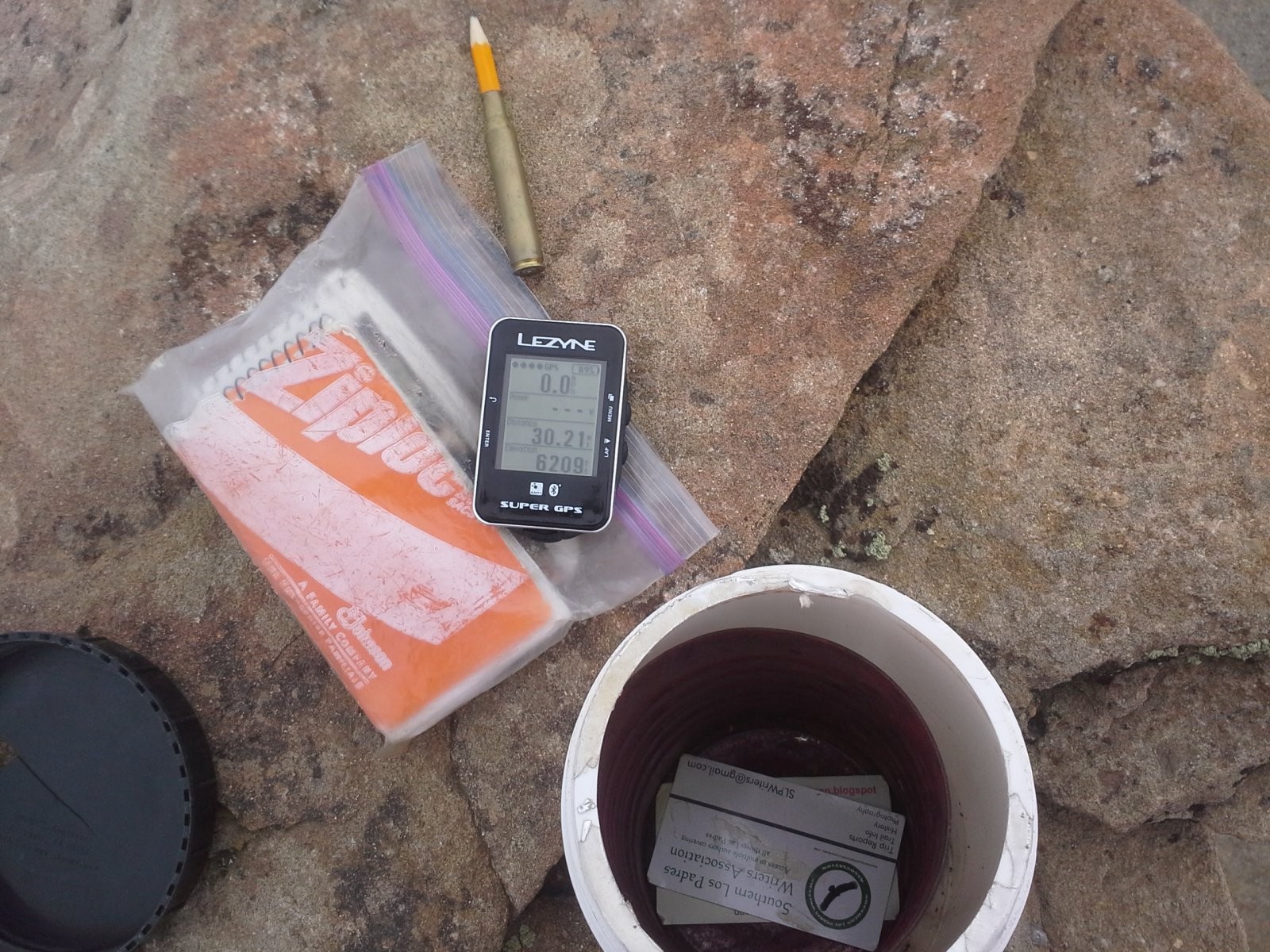 Abundant Optimism was Countered By Reality

Humans suck at estimating nearly everything. When was the last time someone shared a story and said "estimated" without prefixing it with "over" or "under"?

Back at the junction, Blake and I shivered in the light rain for twenty minutes wondering where Jason was. By the time he had fixed his second flat and reappeared, I had decided to proceed with the original plan, veering right towards Nira Campgroung and the up the unpaved Old Catway, hoping to bag two more lesser peaks, Zaca and Figuero. Less than a mile up Catway, the plans fell apart. The light rain was constant enough to moisten the namesake Zaca Clay soil, turning a thirty minute climb into over an hour of on and off hiking with seventy pound bikes. For the first time ever, I was unhappy with my decision to run massive 29x1.8" tires on the RLT. 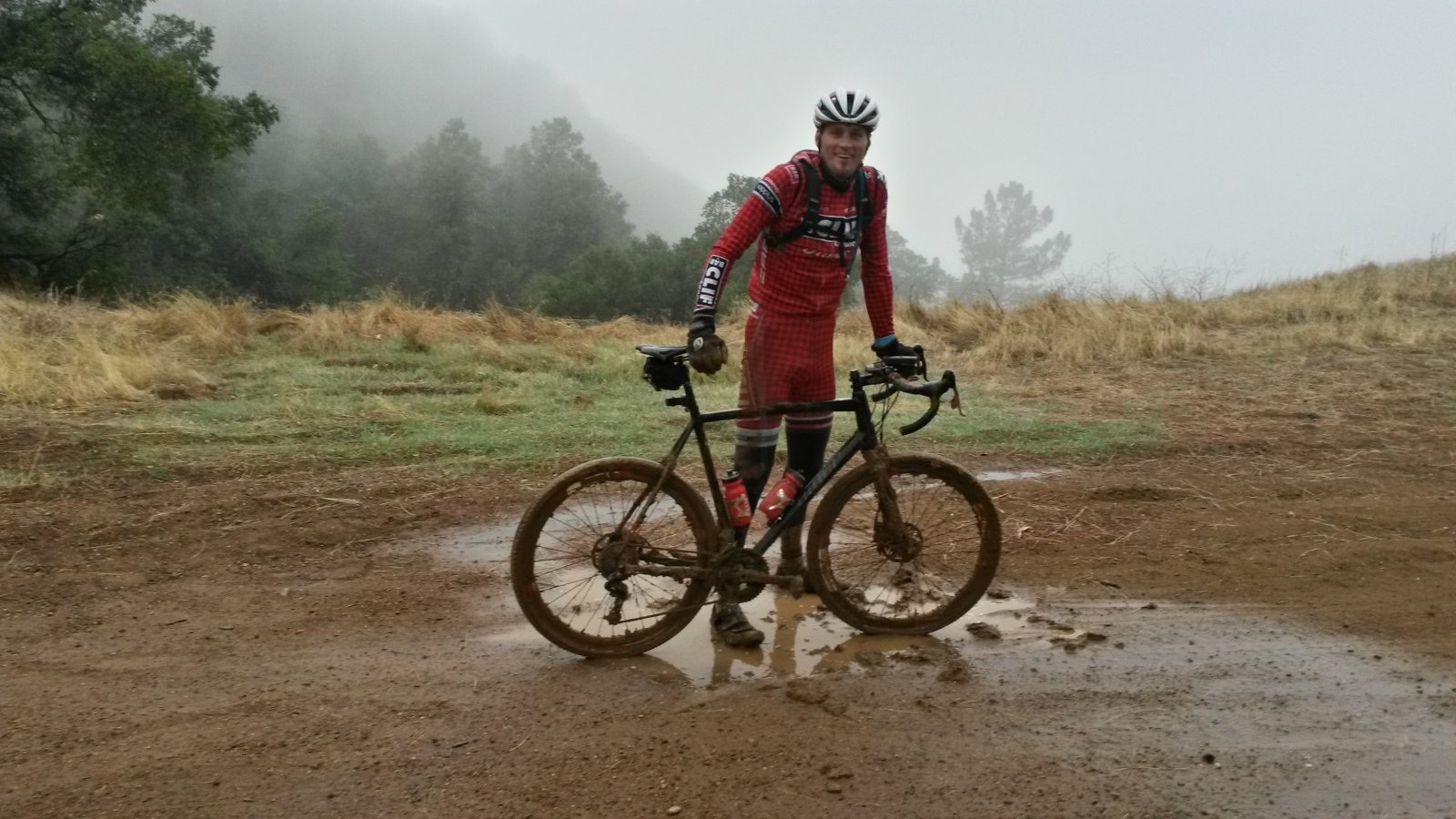 Blood, sweat, and broken gear are the currency earned in adventure, redeemable in tall tales at bars and elaborate retellings on the web.

Blake and I once again found ourselves standing in the forest somewhere, this time scraping clay from our rigs and assessing the damage. Mud was everywhere, but the bikes were functional, so we pushed on down the gently descending gravel Catway Road back towards civilization, aiming for puddles to free up the shifting. I quickly noticed a definite lack of front brake power, and dialed in my BB7 pads as far as I could. Jason reappeared once more, his bike in shambles, derailleur destroyed, hanger ripped off, chain dangling. I had to descend at a snail's pace, since any reasonable speed would have resulted in me flying off the mountainside in a turn. The next morning, I pulled my ruined brake pads, and noticed that a piece of the pad retaining spring was welded onto my front rotor. 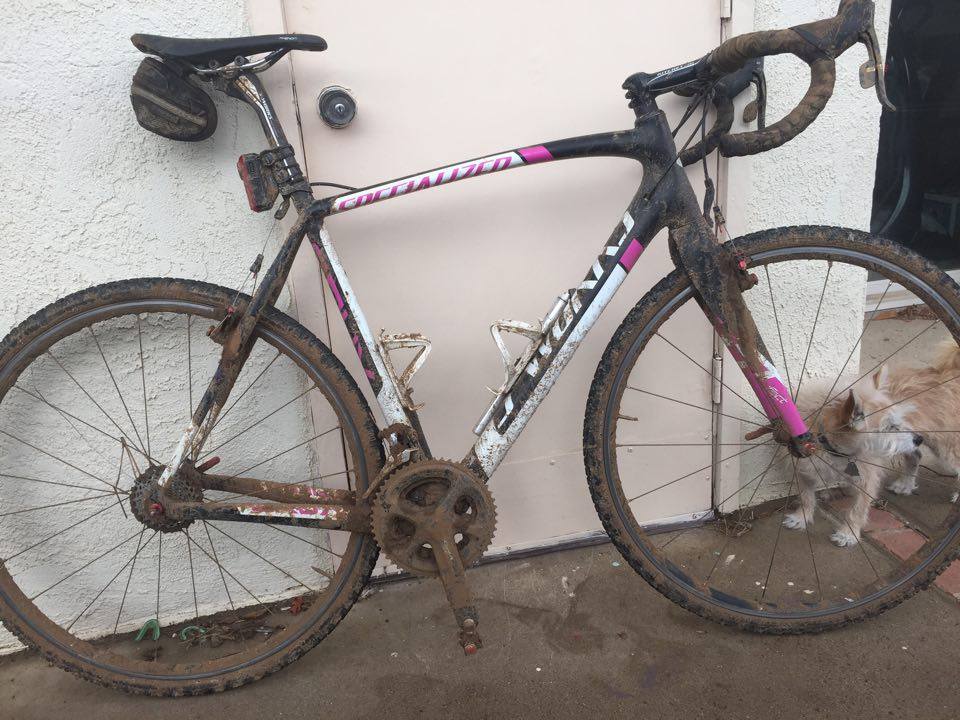 We may be masochists, but Type III Fun isn't everything. (Type I is actually fun, Type II is fun in retrospect, and Type III is only fun to tell stories about after).

Upon arriving at the pavement on Figuero, we were shrouded in the clouds that had made the previous hour and half so miserable. But that exact moment, the clouds suddenly drifted east, revealing the Santa Ynez Valley three thousand feet below, glittering in the post-storm sunset. It was gorgeous enough to make me briefly forget how cold and wet I was standing there waiting, and we both retrieved our phones for some no-filter goodness. But then I was cold again, so I spun back up the road to locate Jason and his partially disabled bicycle. 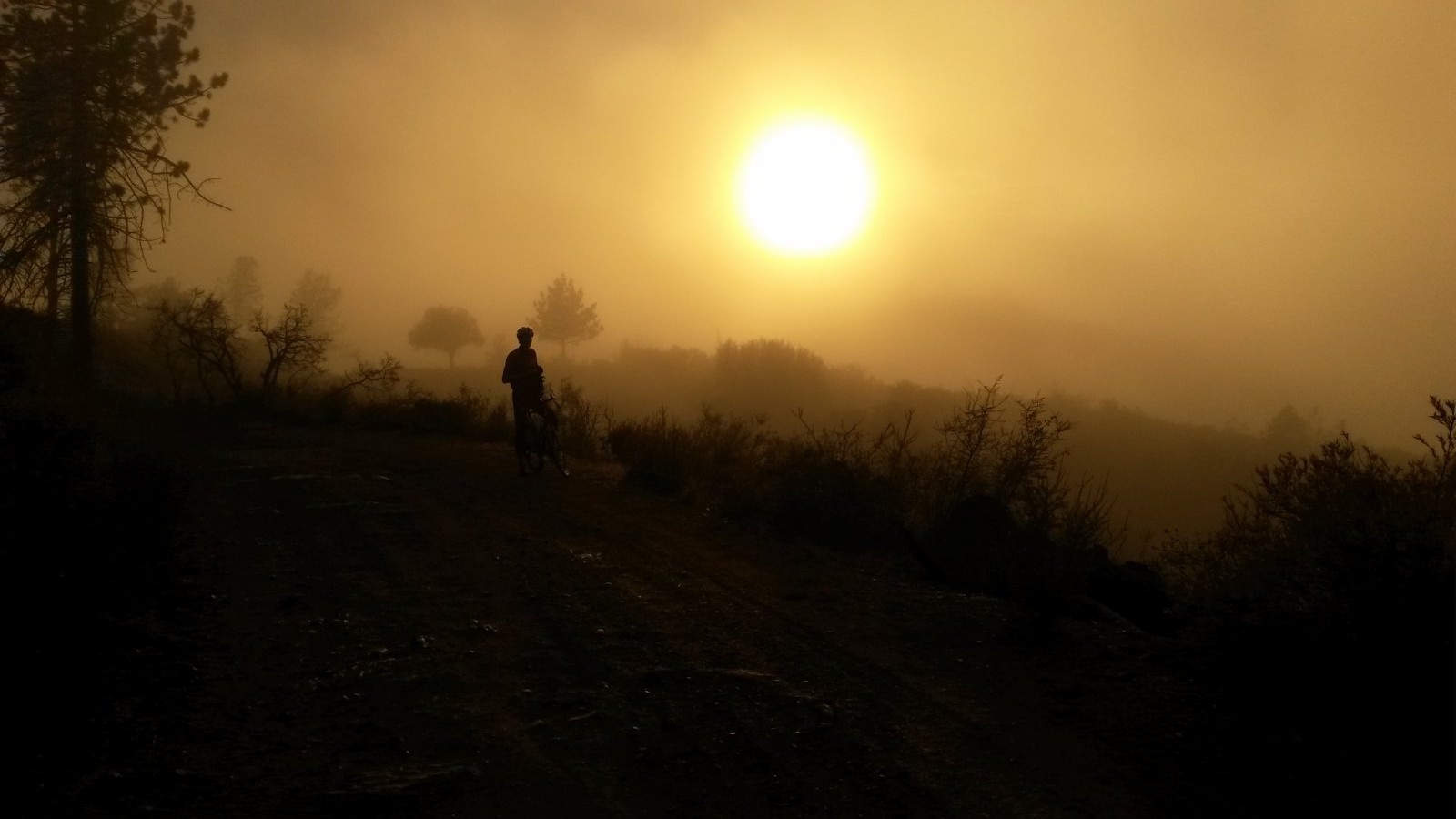 Blake pushed Jason over a couple rises on the descent before we deposited him at the ranger station to wait for Blake to retrieve the car. Then we switched on our lights and completed the descent and final seven flat miles to Los Olivos in the dark. Like many good outdoor odysseys, this one began in the morning (10am to be exact), and finished with artificial illumination.